Ooo, I wanna take you 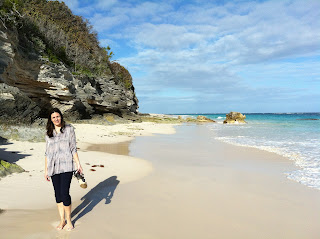 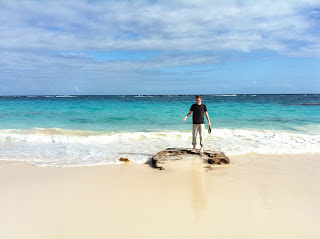 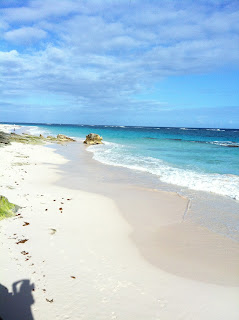 So let me tell you.  A surprise weekend getaway to Bermuda is probably the best thing I can think of in the whole wide world. And, it was a surprise for Sean which means I got to see Sean--he who maintains 3 expressions-- truly, absolutely, completely shocked.   I covertly set it up, arranged with a dear, dear, amazing friend to come stay with Julian and I packed our bags in secret, hid them, smuggled them out into a car without Sean knowing, and he was stupefied the whole time until I told him in the car on the way to the airport.  I played Kokomo for him to get him to guess, but he was too perplexed and kind of unsettled to really try, and I giggled the whole time, almost unable to even say the words.  Anyway, it was MAGIC, and i'll throw down all our pictures here.

So maybe it was that we've been too used to seeing a wide spectrum of gray, but all the beautiful colors and gorgeous blues and greens of the ocean were a shock to our eyes.  I was this close to buying myself an inhaler because the scenery, particularly this surreal beach constantly took my breath away.  It did not seem real.  I looked at it in consternation, trying to convince myself, but i'm not really sure it was. A massage with every step, the sand was the softest i've ever had the pleasure of treading. And so pristine, so fine. Marshmallow sand. No rocks, no debris. An occasional crab here and there, hardly any shells. Seriously, what gives??  It was weird.

I sang Kokomo nonstop on the trip. Either aloud or in my head-- (Sean just said, "but it was mostly aloud..."  as he read this over my shoulder. Thanks) -- it was on constant loop.

One of the mornings was overcast and the skies with the dark gray blues with the ocean blues was almost too much to bear. Seriously. 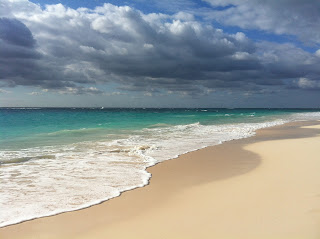 And might I remind us: This place is 1.5 hours away from me, people. It was cooler temps than the Caribbean but just as beautiful! (And warmer than here, so two thumbs up)  We got there fast and then we took it slow (<-- yes).


Basically our trip consisted of:

Many walks back and forth along the beach, named Elbow Beach.
Taking a nap to the sound of waves crashing.
Playing games on the patio
Reading
Talking
Sleeping
Eating
Soaking up the sun and sea air

It was the perfect trip. Short and perfect. I kind of love these mini-trips because there's not enough time, therefore not a lot of pressure to do a million things. You know that each second is going to be quality, and it was.

Did you know that Bermuda is made up of a million islands that form the letter J?

it was meant to be.


Here is the view from our patio/balcony thing. 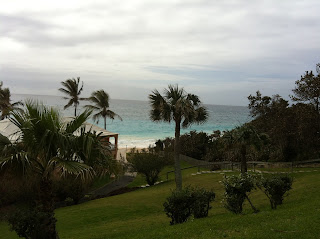 And a shot at night of the backyard area. The pool is around there somewhere. It was a lovely place. Not too ritzy or resorty. Just simple and islandy. 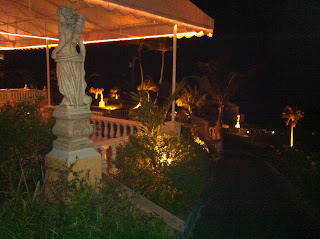 After a few walks we just decided to forego the shoes. Who needs 'em? Man i love the beach. Here is the winding stair down to the sand. 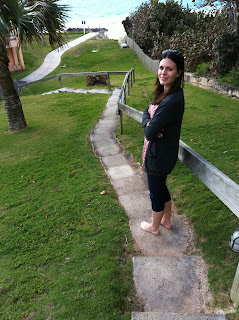 Along the beach were rocks and cliffs. Sometimes there would be an almost hidden brick tower or paths that made it looks like ancient ruins.  Some of the rocks were very sharp and weird. These looked like lava rocks but i'm pretty sure they weren't. Too bad I know 0% about geology.  Umm.. i did see some sediments. So some rocks were sedimentary. That's it, that's all i know.  But we loved exploring all the nooks and crannies. 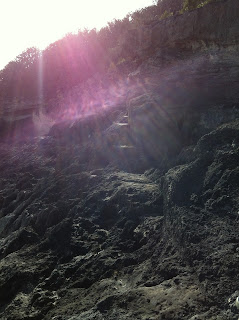 Just the prettiest little pool ever 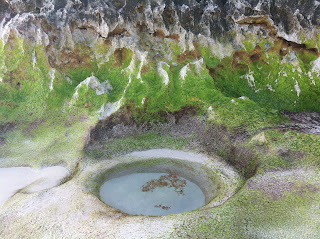 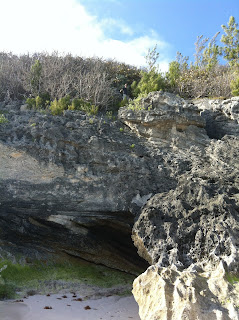 I wish i'd have snapped a pic so you could see it, but along the walk, on the rocks there was this secret stairway cut into the stone. Here is a pic taken from the broadside. See Sean? 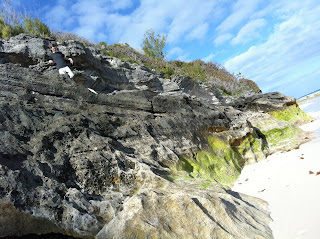 We left the beach one time to walk to the market.  Here are some pictures. 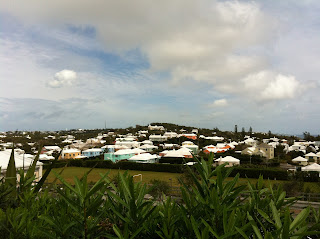 Bermudian fun fact: they drive on the opposite sides of the road. who knew? Not I. 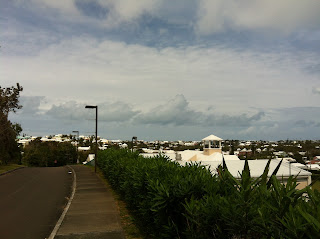 And then we saw some giant pineapples just sitting there on the grass! i love the squat palms. 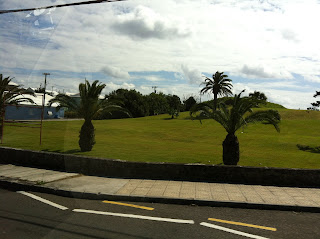 One night there was a huge fat moon and it was shining all brilliantly on the ocean. Sean tried to get a pic but we'll all just have to use our imaginations. (here's the attempt) 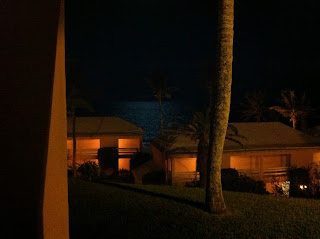 It was kind of spectacular.
The overcast day. I named all of these pictures "perfect beach."  It was. It really was. 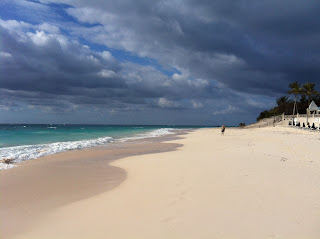 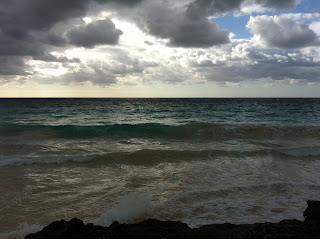 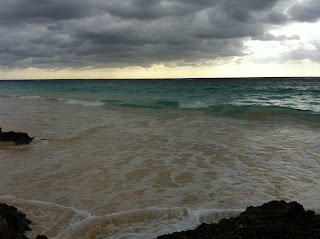 Those heavy dark clouds made it so eerie, in an unnerving yet happy way.  It reminded me of that dream scene when Jodi Foster's character in Contact finds herself on a mysterious beach and her dead father approaches her. Pretty sure it was the same beach, and same illusion.

I think this one is titled "itstoomuch" because clearly, from my expression and demeanor, it was. I just couldn't take it all in. I felt hopeless.  But happy. 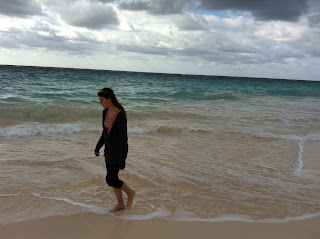 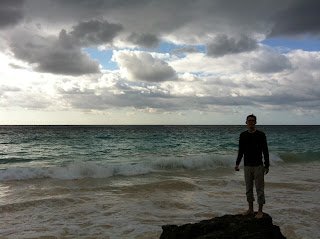 So Sean didn't realize his hand was visible in these pictures.  I thought about cropping it out but then i was like, maybe it adds an interesting "look through the magical periscope of my hands!" viewpoint, whatever that is. 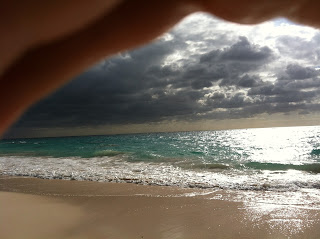 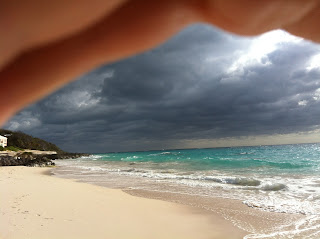 It's a pretty great thing to feel like you're having the perfect trip in the middle of the perfect trip. To know that it is perfect.  It is perfect contentment.  Wifi was available but only in the lobby so when we were there, Sean looked up Bermuda in Wikipedia and left it open to read in the room, which he did, learning all there is to know about bermuda, which he also shared with me.

I am completely convinced that escaping to an island paradise will cure what ails you, will reset you, recharge, rejuvenate, restore.  All the good things that people need from time to time.

And then at the end, when we had to go to the airport to fly away, we waited outside for a delayed flight. After a while we decided to cross the street and we situated our bags and ourselves on the rocks and watched fishermen float by. 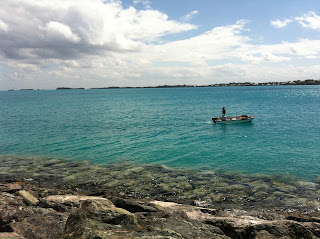 "We got there fast and then we took it slow." HAHAHAHAHA. I am so glad you had a wonderful time and quite pleased you hid the bags in the car so it was a complete surprise. I *will* dock this post points for no picture of Sean's shocked face though. Yay for tropical getaways.

They drive on the wrong side of the road in the Bahamas too.

Yippee for vacations! I am so happy for you guys. Sounds absolutely PERFECT.

My mom always said, "If you can't say something without sounding insanely jealous of other people's awesome vacations so you end up sounding like a jerk, don't say anything at all." She's a very precise woman.

Yay for winter beach trips! I'm glad you got to go somewhere warm for a bit.

Why am I just now learning about your blog(s)? Was this an evil trick to keep me from peeing in my pants in bed while reading blogs at night? B/c the trick has now expired and I am sitting in a pee-wet bed. You are hilarious. Please can you teach me how to be funny again. I'll pay cash.
LOVE,
CARRIE

pee-wet bed!! sounds to me like you need no help at all. But still, i've found that to be funny, it helps to surround oneself with funny people. We should have a We R Funny meeting.