Thanks Be to Richard

In Julian's preschool they have a mascot. It's a monkey named Manny. They voted on him. I think Julian voted for someone else, and I think I would have too, but Manny's proven to be a worthy and beloved mascot.  At the end of each week in school, the teacher draws a name and a student gets to take Manny home and have adventures and documents them in a notebook that accompanies Manny.  This is a coveted moment and has resulted in high hopes and heavy hearts at times.   The anticipation has proven to be highly effective in providing some sweet delayed gratification because finally, after several weeks, Julian got his turn and I think I was just as excited to see him holding Manny when I arrived for pick-up as Julian was holding him.

It's also come at a perfect time because, in case anyone's forgotten, it's January, the official Worst Month of the Year (this may tie with March. I'm not sure. Anyone want to weigh in?) when I have stopped traveling out of the city, out of my neighborhood, out of my block, out of my house? This is in concordance with this important Buzzfeed article where I checked off 14 of 23 signs I've lived in the city for too long, in particular #8.

First, Julian and I hit up the doughnut shop where I consumed my blood sugar's max capacity for doughnuts with mildly sickened satisfaction. My favorites were the lemon meringue, blood orange, and plain glazed, as usual. Next was Saturday and I told Sean to choose a museum for us to visit.   He decided on some galleries in the gallery district, also known as Chelsea, on the west side.  We had a nice walk and a nice train ride, even if it was the dreaded C train which = gross, loud, slow, and stupid. Hate the C. Hate it.

**THIS JUST IN:**  HA HA!  I just googled  "worst subway train in Manhattan" to see if I could find some supportive evidence and guess what came up?!  HA! Oh, I am delighted. Go ahead, do it.  I knew my feelings were valid.


Anyway, we found our way over to the galleries and I made a comment about how I didn't know how I felt about galleries.  They're so small and it's like, what, I travel all this way just to see five pieces of art? Where's my bang for my buck? It's like high end clothing stores. They always look cleaned out and I'm meant to pay $500 for 1 of 7 options. I'm unappealed.  In this case my buck = time and energy, since the galleries were free. But still, would I not rather visit a huge museum and see all the art in the world?  I made this statement and then we visited them and I took it all back.

"Galleries are the BEST.  We pop in, pay no money, see some art, are able to actually pause and enjoy it and think about it. I don't get lost, I'm not overwhelmed, no one else is here. It doesn't take all day, and we pop out! It's a win win win win win!"

I also had to take back another statement I had made which was about Richard Serra, the featured artist.  He makes/installs/exhibits giant sculptures made of steel or sheet metal or something.  I've seen several of his shows, some solo, some in museums.  They're very enjoyable because they're so menacing and demand your attention AND respect. Sometimes fear.  Click here to view.  The statement I made was something like, "geez, Richard. Get a new trick."   And then afterward I said, "I take it back, Richard. Keep doing what you're doing and never stop."   His medium is the same but the configurations are varied and so much fun. I love participatory art. Art as an experience. Art you get to run around in.   We took Manny with us and had a great time.  See some pics: 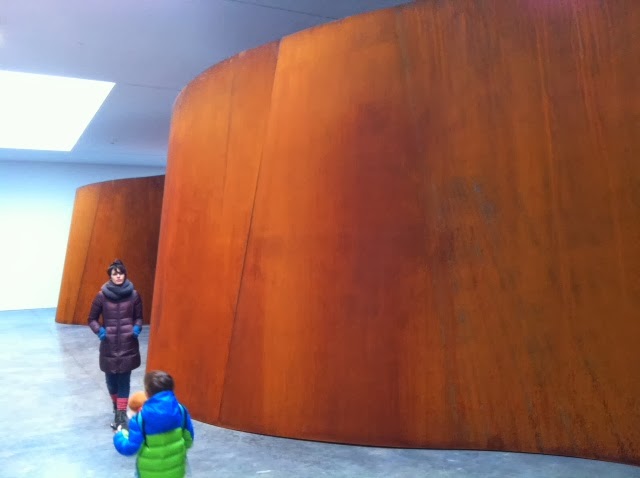 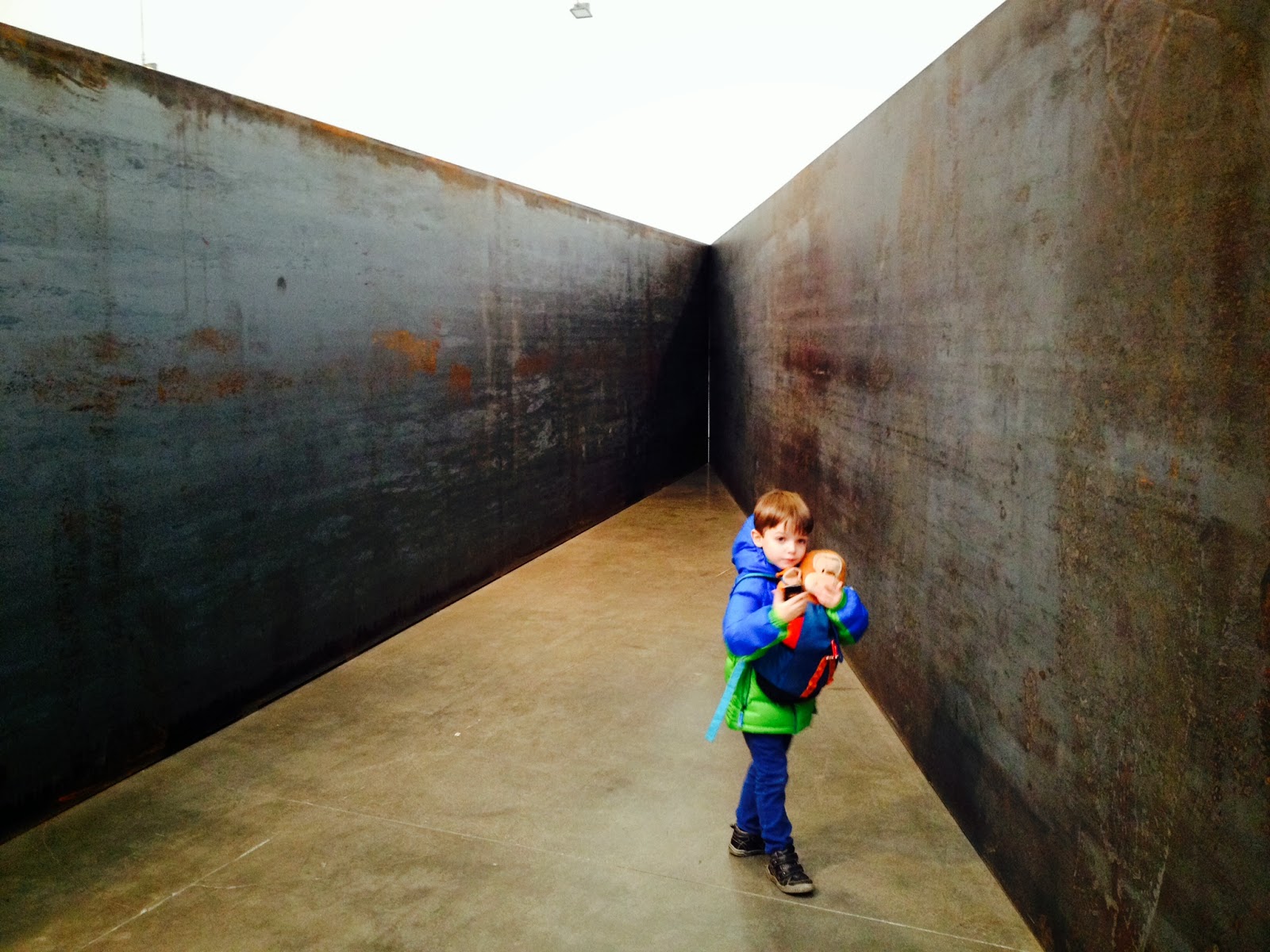 After this selvesie, a nice guy offered to take our picture.
Julian didn't want to be a part of it until he saw we didn't care if he was in it or not. 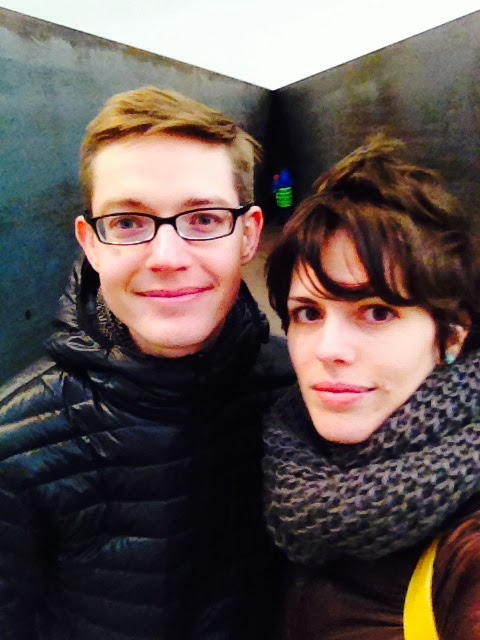 Then he came running back and jumped in for the first ever
held-still family photo he's ever been in in his life. 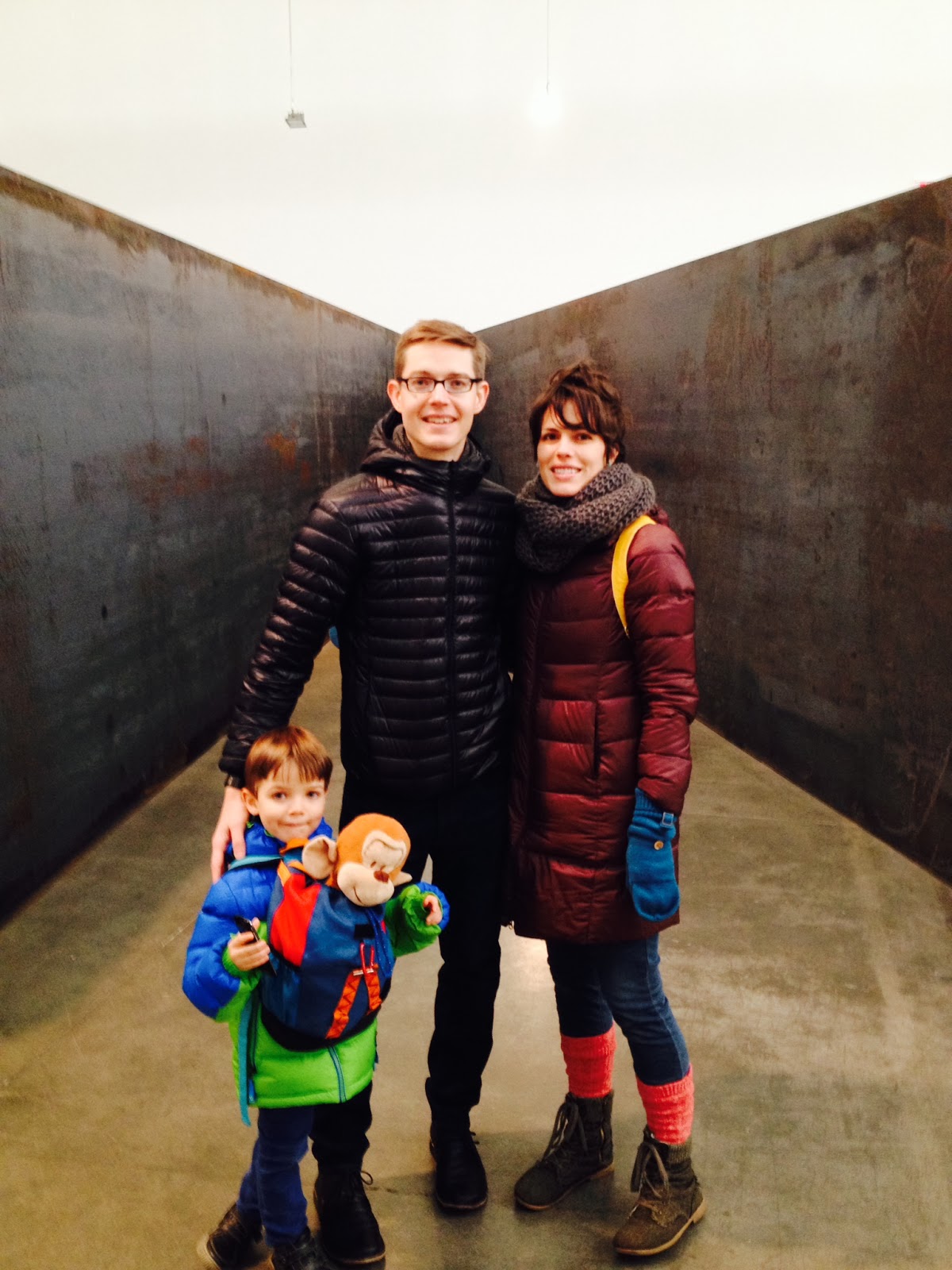 Speaking of family photos, we've never had any remotely professionally taken, other than with extended fam, but I think if I do, I'm going to do it here.  Amazing backdrop, right??  I should have had the guy use his awesome professional camera to take our picture.  "Uhh, instead of my phone, could you just use your camera? Here's my email address. Just use it. how hard would it be? There's the button. push it. go ahead.. it's easy. shhh, do it. do it. push it. do it. take the pic. shhh." 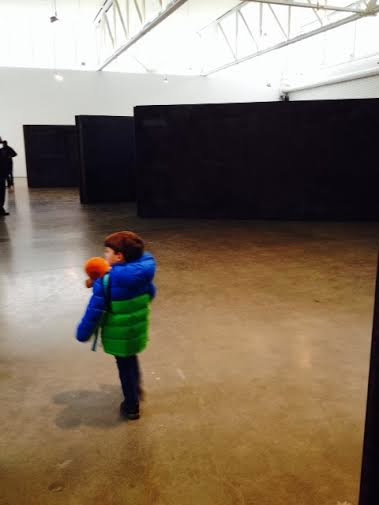 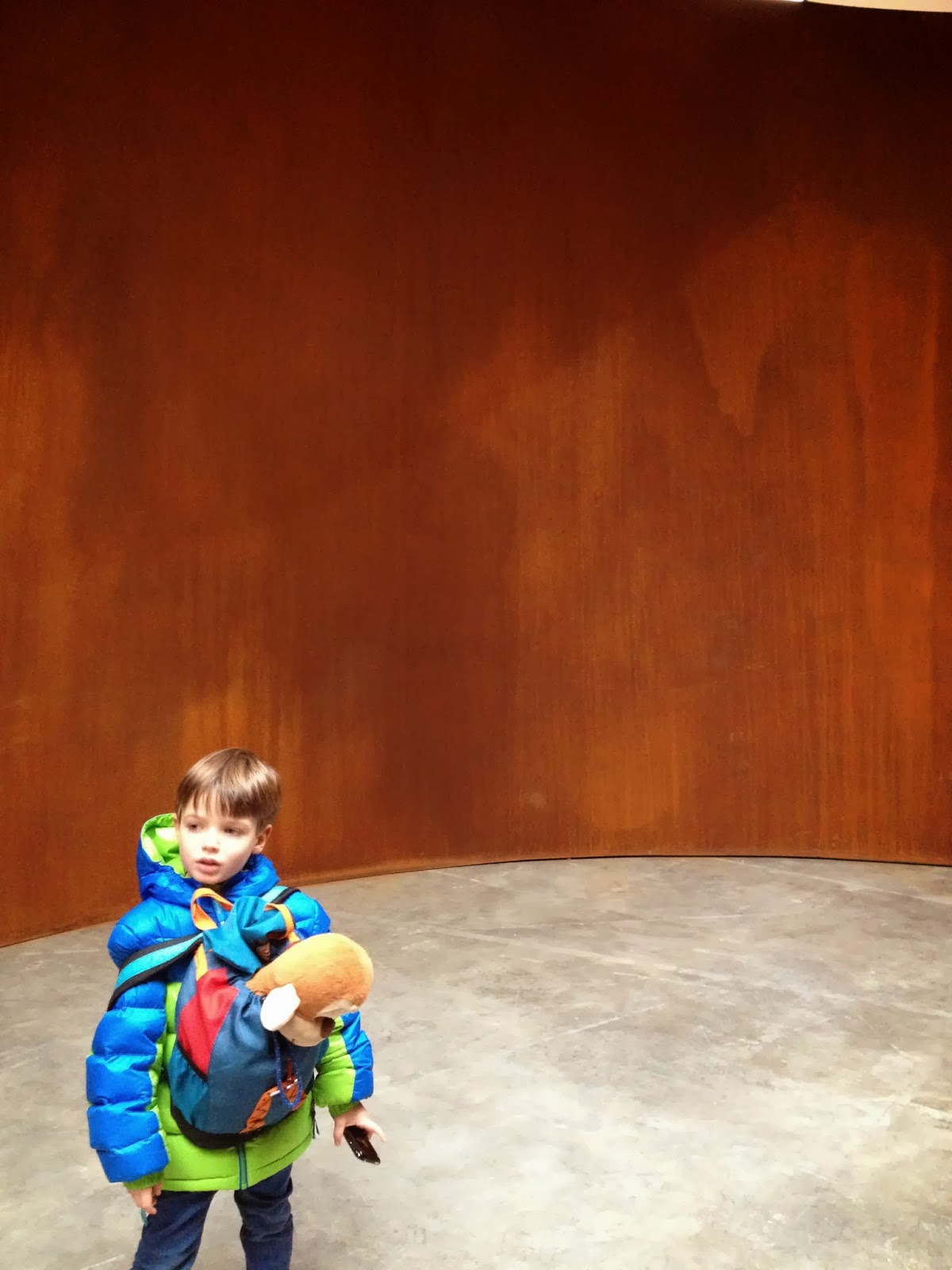 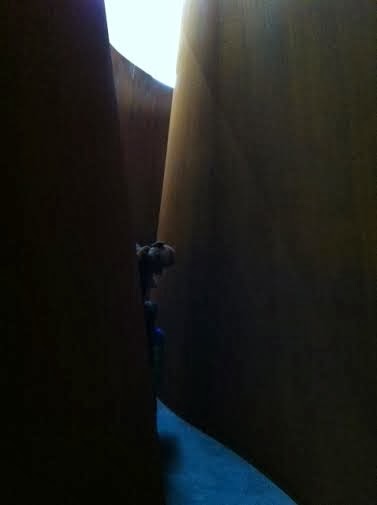 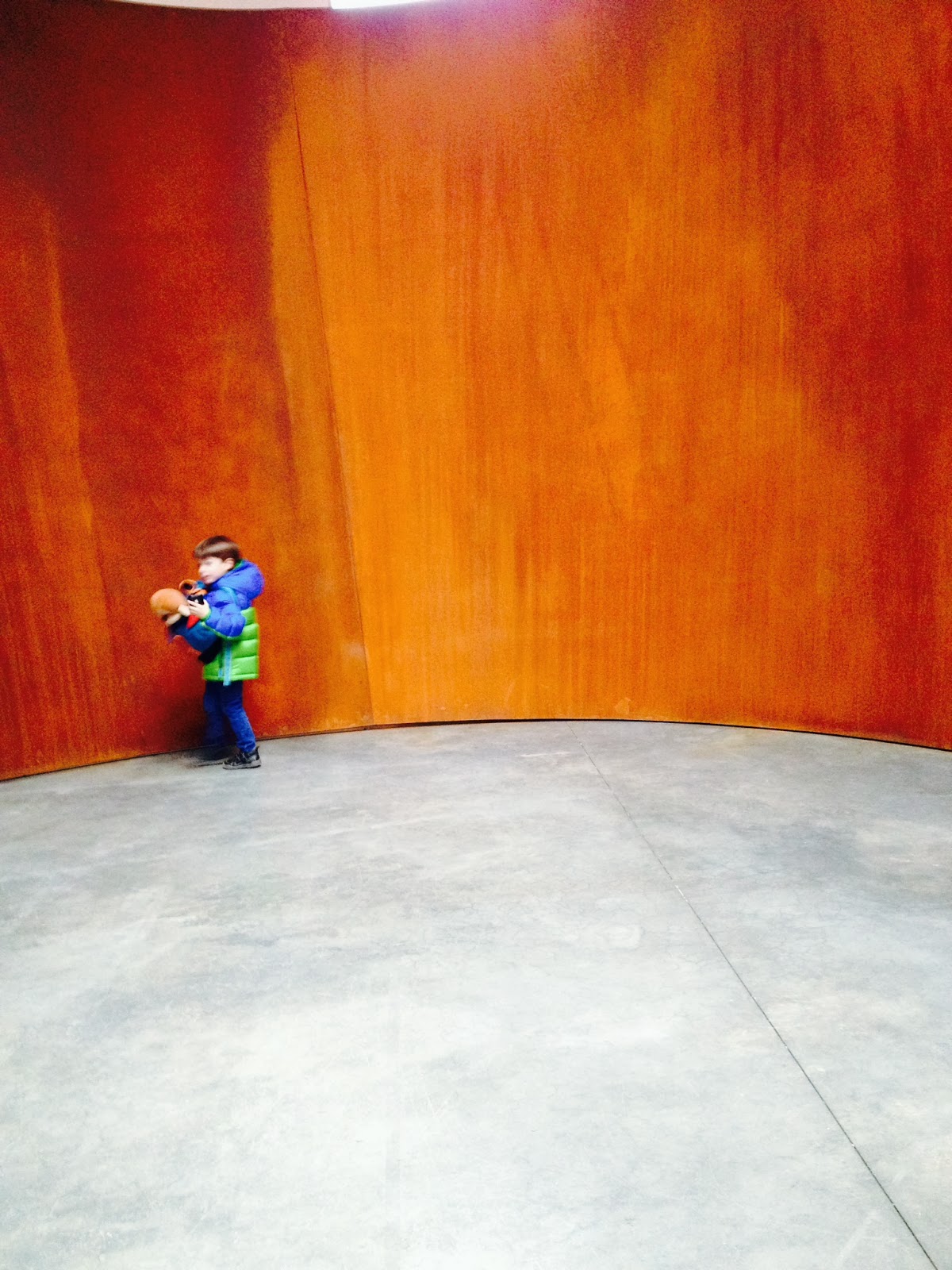 Julian took his own photos which I wish i could share with you, because he got some pretty great shots, but his phone is old and i can't email them to myself even though I thought I could. 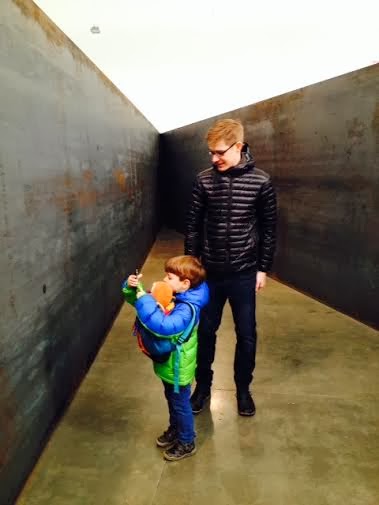 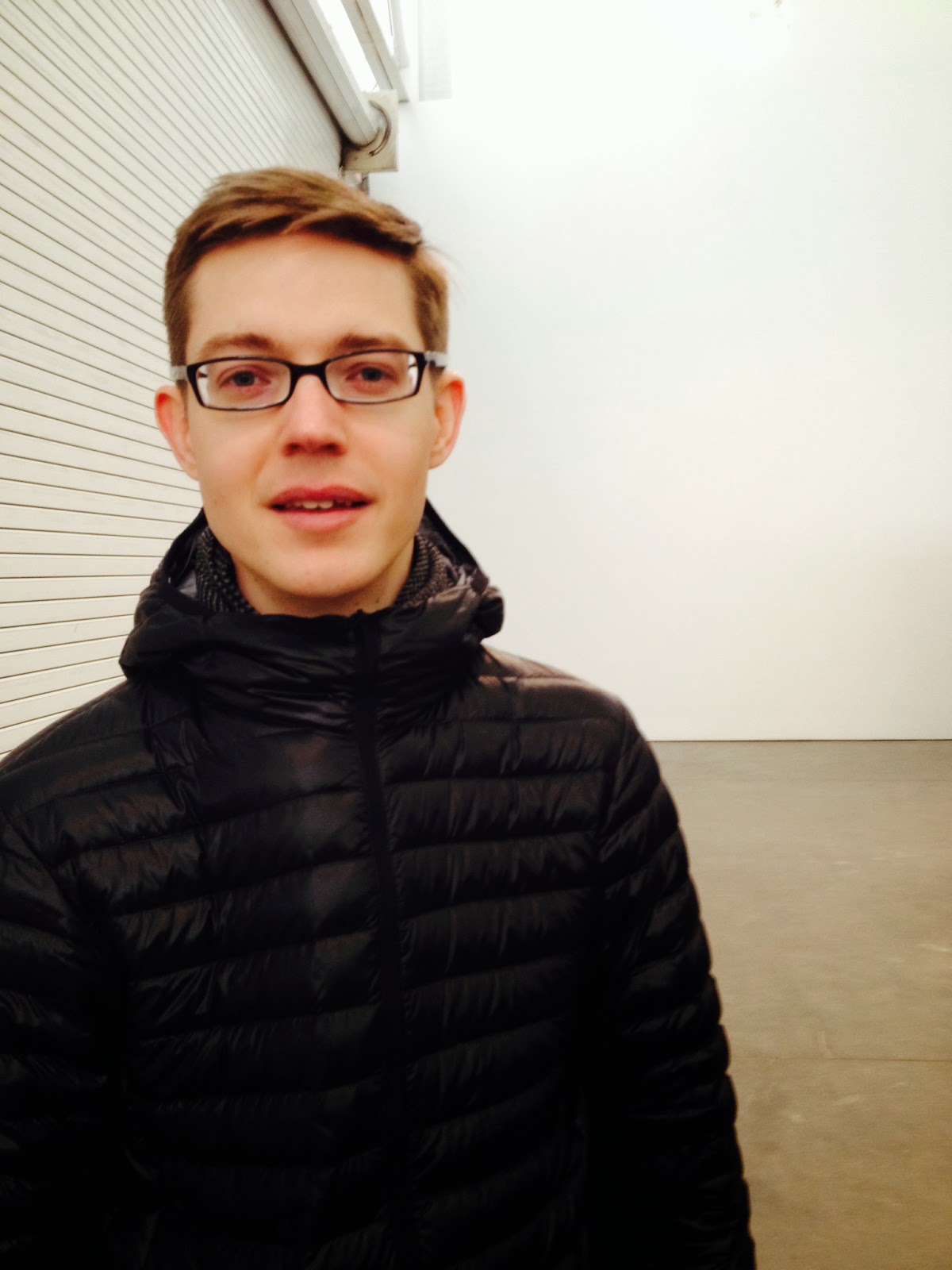 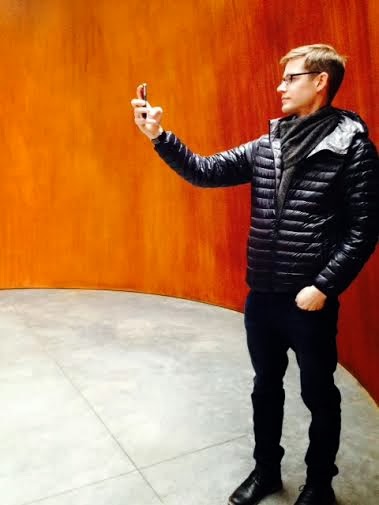 And here's how it turned out, the second half of my art piece: 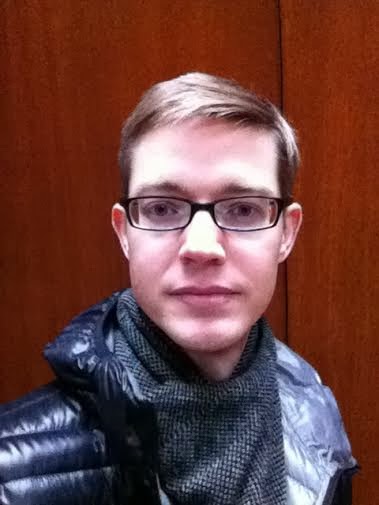 I think I'll call it "Self-voyeurism."


Taking artistic photos with a monkey. Some of the guards saw us and I'm pretty sure they thought we were trying to make art of our own instead of working on a preschool project. But then i was like, they're right, that IS good art! We should be doing this.  Stuffed fuzziness + austerity = good art. 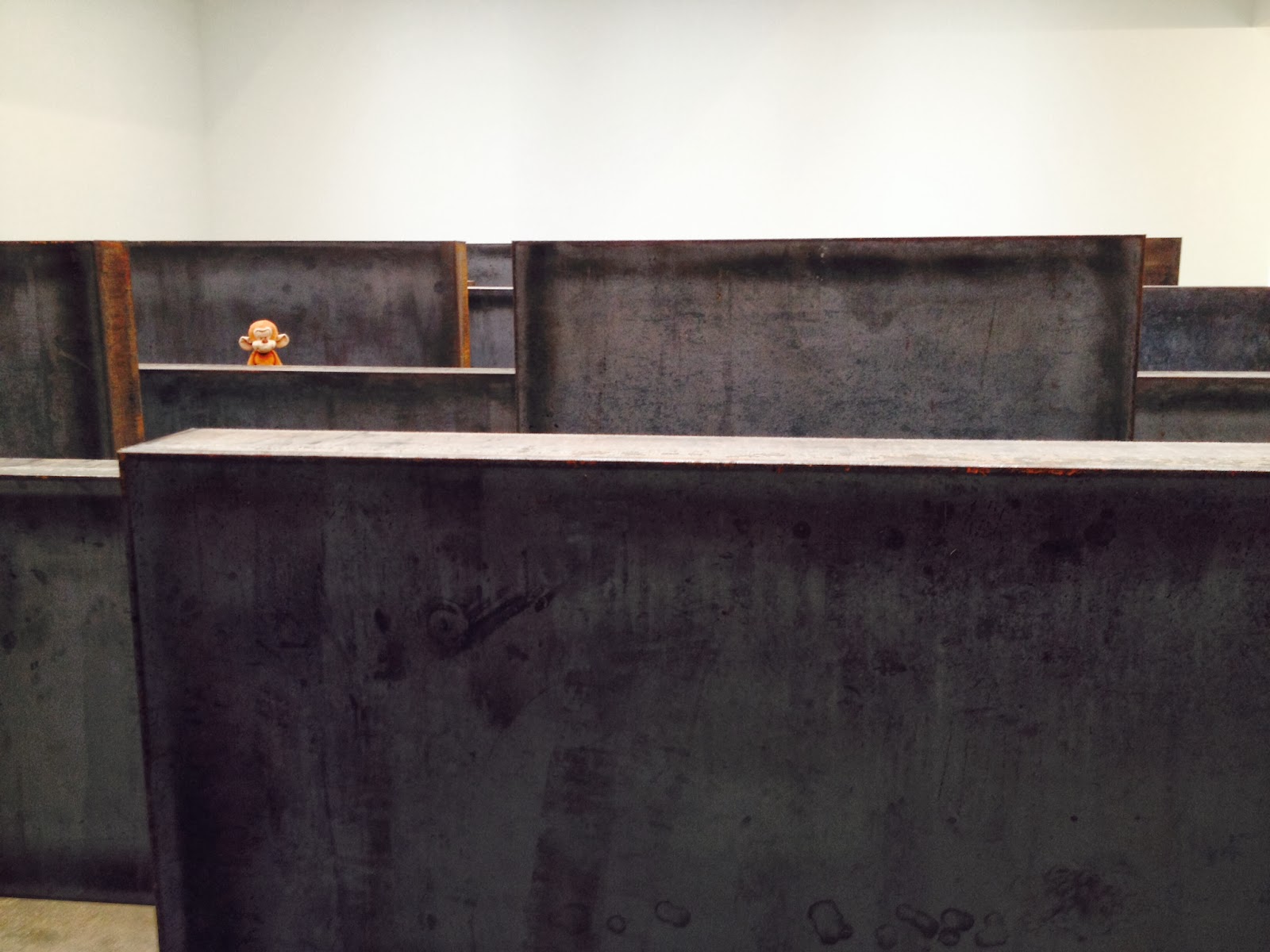 I think I'll contact Richard with my idea and see if he wants to collaborate, along with offer up my thanks for making our January Saturday special, and for invigorating my soul.

First off, Julian has his own phone?

Yes, yes he does. I believe it is an iphone 1. It is so cute to see him run around and take pics so seriously. Especially with his baby bjorn.

thanks for the comment, ash! You're #1 in my book.