Julian is in the inquisitive stage of his little squirthood (that sounds weird).  It's fun and I knew kids ask a lot of questions but I swear to you, i've never been more stumped in my life.  He's asking me the strangest, most existential questions, it's starting to hurt my brain.  It's really making me look at life and the universe differently and frankly, I now question everything because of it.   Here are a few examples of things he says that make me do this: 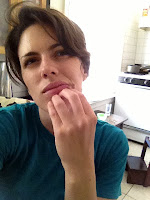 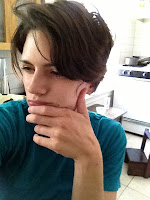 Julian: is the internet working?


...as if he had no memory of his first question, or of trains, or of anything.

"Mom, have you seen grumpy teeth?"

Julian has a lot of obsessions lately. It's fun but weird at the same time. For example, on Memorial Day we went to the beach with some friends.  It was then that Julian first learned about the horizon and he hasn't forgotten it since.  He asked us what it was and we all were stumped. "The horizon? Well it's the... err... line where the sky touches the sea.."

What IS the horizon??  It made all of our brains hurt.  I was satisfied in defining it in more mystical terms, but it has spurred a debate amongst us that resurfaces often.  A friend said it's the line of the sky touching anything, anywhere.  Like, the horizon could be along the treetops right in front of you. What?? Sean rebutted, taking a more subjective approach,  "well maybe that's your horizon."  What??  Then this friend became adamant and asked, "ok, so what are your 'rules' for what the horizon is?"   Another friend and I thought about it and said it had to be a somewhat flat surface. Maybe? But most definitely in the distance; it can't be up close.   ???  A debate certain to come up again, i have made no progress as to defining it.  And what's more, not only is Julian still inquisitive about it, he's also scared of it. We've been to the beach several times since and he always cautions me, "don't go into the horizon, mom!"   Which, again, makes me go


"Why did you shut the door hardly?"


took me a second but i realized that in this case, "hardly" is an adverb, which is adorable


Lastly, another Julian obsession has been the Titanic. The ship. The tragedy.  We've read some books and we look at pictures.  We watched a slideshow of before and after pics and Julian couldn't take the Hymn to the Sea and broke down in the saddest sobs, which made me laugh, and then cry.     He'll bring it up in every conversation.  He asks me questions constantly.

What hurts my brain about this one is when he's playing and suddenly declares, "I'm on the Titanic and I'm Captain Smith! Mom, who do YOU want to be?"  And I feel a weird discomfort at my options-- the souls who were horrifyingly lost in an ice-watery grave as the ship broke into pieces and sank to the ocean floor, or the ones who made it onto a lifeboat, witnessing it all.  Not the most fun make-believe I've ever participated in.  But a sobering one, I'll give it that.
Posted by )en at 10:56 AM

From wikipedia: "The horizon (or skyline) is the apparent line that separates earth from sky, the line that divides all visible directions into two categories: those that intersect the Earth's surface, and those that do not. At many locations, the true horizon is obscured by trees, buildings, mountains, etc., and the resulting intersection of earth and sky is called the visible horizon."

Uhhh, this makes even less sense. I'm sticking to "the magical place in the distance where the rainbow ends and fairies live."

This is funny. Just last week we were driving home right into an awesome sunset and Halle said, "Woah, look at that awesome hori-sun." And I realized she was confused about it, thinking it was the sun itself. I said, "I think you mean horizon, which is...er...uh...right down there where the sun is right now. Where the sky comes down to...as far as you can see." Fail.

I know you added more of these gems of Julian's since I first read this post. Don't try to sneak them in there without telling people. I wouldn't miss these for the world. I love his brain.