Questions & Answers of the Jurassic

I got a link from Val to alleged unanswered questions from Jurassic Park and I am here today to give answers to those questions a la Jen.  Because if there's one thing Jen knows, it's JP and how Michael Crichton based it on actual science because he is a brilliant everything, may he rest in peace (sniff. Side note: When he died I actually began a tribute blog post but I could never get it right and just gave up. So much to say, so unable to say it.)


1. How did they clone extinct plants?

I'll tell you how. Exactly the same way they cloned the dinosaurs. They found some fossils of extinct plants and extracted their plant DNA using special rock DNA tools.  To complete the genetic code with the..err..sequence caps.. and whatnot, they used the sequence caps from other species of plants, which is why the Jurassic leaves also look a little fern-like.

2.  How would they know what species' DNA they had?

Answer:  I've asked myself this very question and the answer is simple.  They just found a heckuva lotta DNA and sap and kept searching until they got a bunch of different kinds.  It ain't cheap (I don't know why I'm talking like this) to fund this kind of research and all the expeditions but John Hammond is filthy rich and he spared no expense.  After a while if they had multiple finds of the same DNA they would cross-breed the gene sequence caps with African frogs until it somehow mutated to another dinosaur and they got an entirely different species. This last thought is only a theory but a pretty good one.

3. How much is it really going to cost to visit this park?  Remember they "spared no expense."

First of all, they say you have to spend money to make money, but that doesn't mean you HAVE to. Wait a second, let me start over.  John Hammond had a dream. A filthy rich bugger with a dream. All he wanted was to misguidedly bring joy to everyone. He explains this very clearly that this opportunity should be for all people when they were eating, or not eating, I should say, their Chilean sea bass.


4.  Does the sick triceratops get well again?

Does this matter? Obviously we're all plugging for him but we have bigger T-Rexes to worry about.  It would have been cool if it had recovered (and quickly) since, as we were all taught in elementary school, the T-Rex's #1 foe was the triceratops, and maybe it could have helped them all out. But whatever, it worked out. Except for the bloodsucking lawyer.

5. With all the months Nedry spent working on the island, wouldn't he know what kind of species of dinosaur he was dealing with?

Of course not. Nedry is a computer programmer nerd, and a selfish, arrogant one.  He doesn't care about John Hammond's dream or all it entails. And he certainly didn't have enough respect for the power of that place, particularly when it was out.

6.  How did Dr. Grant come up with his theory for a T-Rex's vision?

If you were an actual paleontologist,  you would know.  They just know.

7.  Famous plot hole:  Why is the T-rex on flat terrain when it breaks through the fence, but when it pushes the car over the edge, there's a huge hundred-foot crevasse? 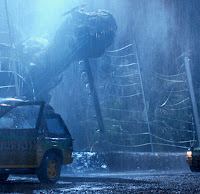 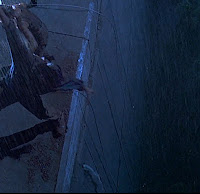 Listen, don't question anything about a T-rex.  Don't pretend you understand it.  You can't just suppress 65,000,000 years of gut instinct!!

8. Couldn't the jeep easily have outrun the T-rex?  Earlier in the film Hammond mentions the fastest the T-rex could run was 32 miles per hour.

Did you not see the movie? They DID outrun the t-rex! after they could switch gears and get out of 10mph.  Plus, don't forget the big tree limb they all had to duck under.  Things were very harried there for a second!


9.  Was this shot really necessary? 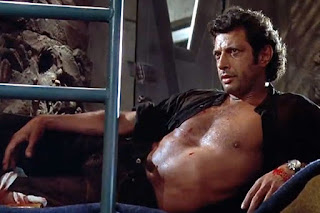 Absolutely.  As I said originally, I can't even imagine the movie without it.  And I agree with Val, that the plot would basically fall apart at the seams.  But practically speaking, first of all, they had to tear open his shirt to assess the damage in his near-death experience.  Secondly, they're on an island off of Costa Rica--during a rainstorm. It's going to be pret-ty hot and muggy for everyone, let alone inexplicably hot nerd-doctors with serious leg injuries and who should be kept comfortable, particularly during times of crisis. Don't make me answer this question AGAIN.

10. With all the fences down, why would Ray Arnold head to the maintenance shed alone?

Well, he just shouldn't have.  Though he knew the place well, he clearly also suffered from computer programmer-itis and didn't have the respect for the park, the dinosaurs, for life itself they all, at one point or another, eventually attained.  This was his moment, sadly.  I blame Robert Muldoon, the raptor expert for not recognizing the need to go with him, though it may have been just as futile (for both of them).


11.  Why did Tim climb the fence? He clearly could have fit between the wires.

Really? is it really so clear? I'm not so sure.  When we see Dr. Grant approach the fence and attempt to bend the wires, it looks barely wider than a basketball.  Tim is thin and wiry but i'm just not sure about that one.  Plus, if you think about it, if you're in an emergency situation where time is of the essence, would you rather climb up high or squeeze ever-so slowly and risk getting stuck?  Which scenario is more panicky?  Tim is not a fan of heights but he made a gut decision and it makes sense to me. 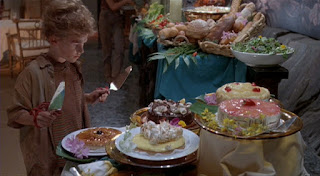 What else could Dr. Hammond and Ellie do while worrying about the others?  They already dug into the ice creams (that were melting).  They had to keep busy and hope alive somehow.  It also could have been Dr. Malcolm, sweatily maneuvering around the kitchen hotly.   And we don't see much of Robert Muldoon.  Perhaps he has a Martha Stewart-like food hobby?  Or, perhaps it was the raptors with their freakishly high intelligence.   That said, they have all this deliciousness for them to devour and Lex goes for the green jello?  I mean, don't get me wrong, I love the jello.  But when I'm starving, after a night of terror running from dinosaurs?  Give me the custard.

13. Why didn't Tim hand Ellie the shotgun [in the computer room]?

I've actually asked myself this very question.  The answer: He is 9 and was just electrocuted. Give him a break.  My question is why was Ellie pushing the door at the hinges. Fail!

14.  How did the t-rex sneak into the visitors center?

I SAID, don't question the T-rex!!

Yes. Totally. I am totally satisfied with these answers. Thing about them just getting as many mosquitoes in amber as they could, and amassing a large collection of DNA, I mean, how else could it have been done?

It was painstaking for sure, but how rewarding for them when they found amber with any dino DNA but especially when they found a new species! Good things come to those who wait. And keep digging.

Question: Why did they drive all the way back to the helicopter pad? Couldn't they have been rescued inside the park?

Answer: Right. Let's just hang around the visitor's center where a terrifying battle between the T-rex and some velociraptors just took place, after having just stood face-to-face with a velociraptor lunging to my certain demise, only to be caught in mid-air by the T-rex, whereupon I immediately lose all bowel control, and then get on the walkie talkie, try to find an open space and also direct a helicopter to it. Yeah. Let's do THAT.

These things all seem so clear to me now. I'm also now thinking of watching Jurassic Park this afternoon.