Everyone is doing it, and I am too.

First, let me tell you something.  A few days ago, I had the most sincere flip moment of my life. You know, a flip moment. Maybe that should be Flip Moment, for they are rare and somewhat significant.  And yes, for the record, I did just make up the term, but does that matter? It's still important.  A flip moment is when you go on for a time believing something, generally about your current surroundings and circumstance, that ends up actually being completely wrong, the opposite, and that moment you realize it is, you guessed it, the flip moment, when your stomach and psyche do a little whoa! flip and you feel like you just stepped in and out of some kind of alternate universe.

Mine, a few days ago, was that I was standing there, looking at our radiator. The radiator that, in the winter time, hisses, spews out steam, sometimes leaks.  For one split moment, pure and honest, caused (I believe) by THE World's Longest Winter Ever in Recorded History EVER (TWLWERHE), I literally, actually believed we were on the seasonal edge of not spring, but winter. For surely, SURELY so much time had passed since the start of last winter that we already had spring and summer and it was now winter again. I really felt that way, and I thought, boy, i should prep the radiators for the leaks and whatnot. And when the moment flipped and i jolt-remembered we were just coming off of winter, I rejoiced in my heart, and as I left that crazy thought by the wayside, I sucker punched winter in the gut, again, for good measure. But it all felt so very weird, so very weird indeed.

On second thought, that's a bit harsh.  I don't love the winter, but I appreciate it for what it is. It takes a lot of flak from the world and me, but I've learned a lot about it this time around and have come to a conclusion that it's not the absolute worst. But instead of expanding on that, let's move on, because I've talked enough about it these days.  Maybe instead of punching it in the gut i just give it a strong shoulder check.

And in light of that, to celebrate, here are my pictures of springtime.  I hope you like them but I also hope you view each one respectfully, with a quiet reverence, paying proper tribute to this thing we thought would NEVER. COME.

I almost think the best part about cherry blossoms are when they're on their way out, falling off the trees. a) confetti in the wind so your random leisurely walk just turned into a party in your honor, and b) the pink carpet covering the floor.  Magical.

Other around-the-town pictures.  Here is some giant flowering thing: 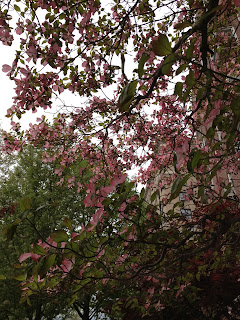 Maybe a dogwood? It's been about 3 times recently that Sean asked me what the name of a flower was and I was like, "what? Hey if I know--oh, maybe a ____? Maybe? I don't know where that came from, seriously."  And then we look it up and I'm right.  One was a hyacinth and the other was an iris, which Sean first called a DAFFODIL and my brain suffered a small explosion, especially since there is a substantial length of time when the entire borough of brooklyn looks like this. 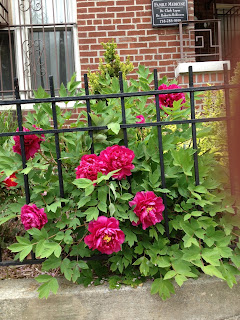 Brooklyn flowers are so beautiful. People have these tiny gardens out front and their compactness (due to necessity) and stark contrast with the cement and city-ness just makes them all the more glorious. You never see a people so happy than Bklyn-ers at springtime, in my experience. You also get to see everything up close. In the 'burbs people will have beautiful gardens and it's not like you can just stroll onto their lawn and help yourself to an up close gaze down at their flowers. At least without looking like a vagrant, or a burglar, or worse, a vagrant burglar.  It's all just in your face and you are welcome to immerse yourself. 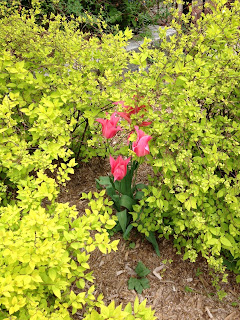 Reminds me of the lonely pink leaf.  (yeah, you're going to have to scroll for a while to find it. you're welcome)

We've twice visited the botanic gardens recently.  I am always struck by their splendor, particularly in May. Here are some pics.

First, the strange. What are these weird things? Who knows? Who can say? Actually the plaque can say.  It's Witch Alder. 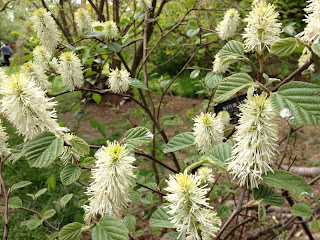 Everything is beautiful here. The non-flowers.. everything. What are these green.. blossoms? on this tree. Clumps? The Green Clump tree, i think that's what it was called. It's just so cool. 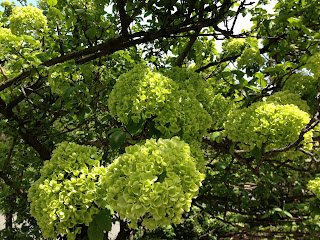 We walked by this tree-bush of the strangest leaves.  The leaves were large and green and half of them looked like they had been dipped in white paint.  I would have thought it a disease of some kind but then we saw the white leaves fully formed and knew it must have been intentional, though wacky. 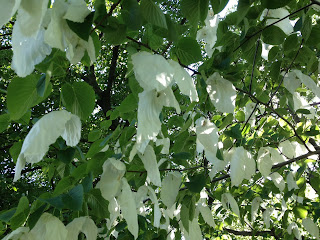 It's like they had gone through a caterpillar's metamorphosis or Gandalf's transformation. They were now [name of plant]'s leaves, the white.  (< -- roll eyes if you must. that was for me and me alone. ) They just dangled, fluttering in the wind. Isn't that weird??

The field of bluebells.  Love it. It's one of those places where you just want to dive in the air and land in the middle of it and live there forever, but you know you can't because if you actually did it, you'd have dirt down your pants and it would probably be super uncomfortable. Like living on the sun or amongst the glowy embers in the underbelly of a campfire-- other places I want to live in forever but probably won't. 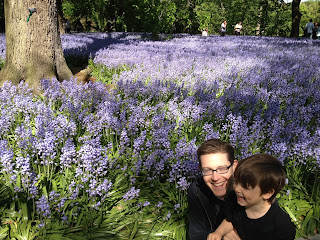 Julian took a picture of me in the rose garden. The roses aren't out yet but everyone's anticipatorily excited about them.  It's nice that the flowers often give each other their moment. The roses know they'll have theirs. 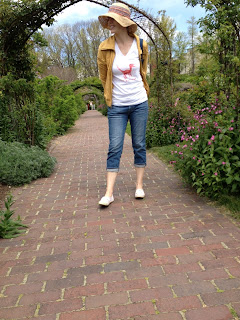 And I took his picture as he fled. 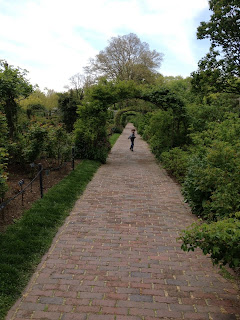 The lilac arena is adjacent to the rose garden and lies at the foot of a steep yet windy path. Hidden by other foliage of loveliness, you can smell it before you can see it and by the time it comes into view, you're half-running into it like into the ample arms of a purple lover.  It's so delicious, and all around you. 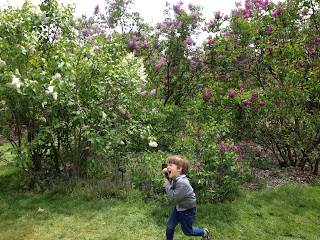 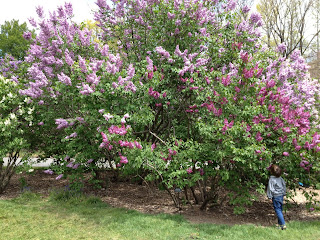 We walked to grasses and thickets heretofore unvisited.  There's this little stream and it was so strange to play in it. Like, we both had to learn how to be a kid with a stream.  "Ohh, uhh... let's see. Grab that stick and poke the mud?" all awkward.  But the adjustment was a quick one. 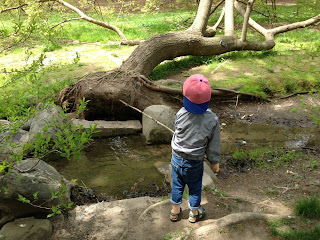 I have always thought that if I ever live in the country, all I would want or need is a cottage and a small orchard of fruit trees. (is that redundant? I'm pretty sure I'm fairly certain it is)  I love picking fruit. It delights me. When i was young, my mom would have me pick apricots from our tree. One day i was up in it, with my bucket dangling on a limb near me. At some point the cat joined me, and then the dog, at the foot, and then eventually the cow in the pasture the tree leaned against. I was tickled and raised my arms out and pretty sure I declared, "I...am one with nature!"  It was a beautiful moment.

Back to the gardens. On our walk, we happened upon this meadow with weepy trees and I added one more thing to my must-need:  weepy trees on a meadow-like lawn. 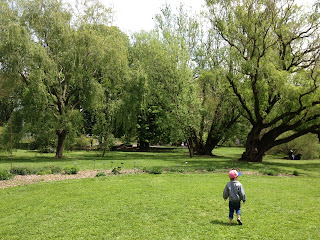 It's a little bit sad for me that Julian isn't used to playing in nature at all, because I really am a nature girl at the root of it all (HA).  I am also a city girl, but I do feel a strong pull to nature after I've been away for too long. But this kid is city-born and raised.  Still, it's inherent in him too and he took to it very well, though I did have to urge him to get a little bit wet, a little bit dirty. 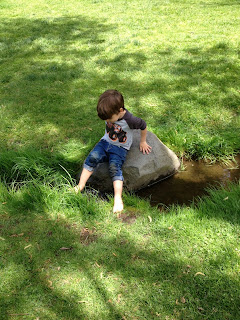 Sean sat on a rock at one side and I sat on one at the other and Julian made several jumps in-between. When I emailed this picture to myself I called it Stream Jump with a Creeper.


The grand finale. One thing I can't get over no matter how hard I try:  Azaleas and their outrageously bright colors. This one is called Azalea Explosion:

Those colors! Just so beautiful!  Arrgghhh! can't get over it. 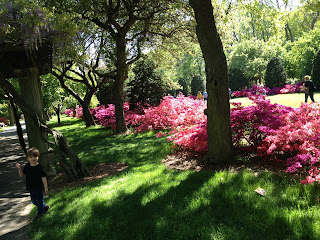 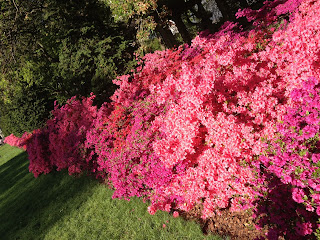 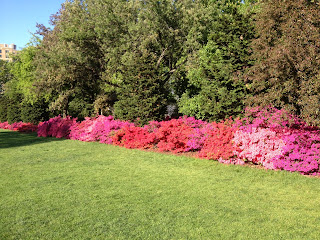 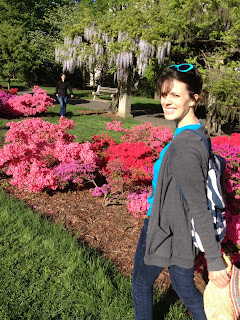 The gardens are a happy place. They welcome you heartily and usher you out giving you a wild and beautiful salute on your way. 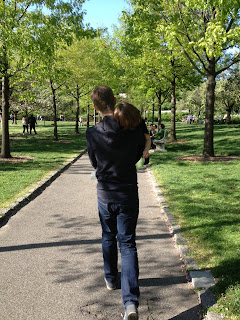 And speaking of salutes, here's to you, Spring. Here's to you. Wait, I guess I'm doing a toast. Well, picture me doing both, at the same time.

haha. I loved this entire post. You might want to live in a pile of embers or a field of bluebells, I'd like to live in your brain for an afternoon sometime. Okay?? Or, maybe I can just go for a walk with you some afternoon. Less weird that way.

Love all the colors. Slightly related story: I was watching an old episode of Project Runway the other day, and the contestants were ferried out/over/to??? Governor's Island to find inspiration for a design challenge. One of them commented on the bright colors of the gorgeous flowers, but decided they couldn't serve as a muse for fashion because they were too TACKY. What? Is that even possible? Can nature be tacky? It's kind of mind bending. I might add that that gem of a statement was uttered by a man who had bedazzled his face.