I have a friend named Val. She used to live here and then moved away so now she's a penpal.  Or i guess you could say she's a penval.  And I'm her jenpal.  It gets confusing.  But we write to each other and it's fun. A few posts back, Val wrote about record-keeping and how many things can serve as such. Journals,  scribbles of half-thoughts, etc.  I am among those who love finding scraps of people's writings when I'm out and about.  It is treasure. Little bits of strangers that they wrote in a moment, things that, at one point, were their thoughts and feelings. I love catching a glimpse.   Sean came home a few days ago and said, "Here, this is for you."  It was this: 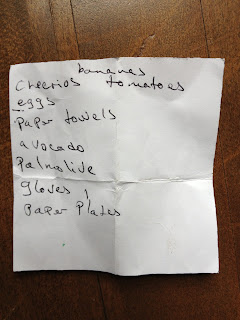 It, of course, delighted me.  I said, "this could be our grocery list."   Sean said, "except I'd never say Palmolive."  But that's just because he's a dish soap snob.

It's unfortunate that someone perhaps lost their list on the way to the store only to discover this fact when they went in, as happens to me all.the.time.  Actually i usually don't lose it, i meticulously write everything out and then leave the list at home, where it apparently would rather be. But I did lose it once which will be a very appropriate segue into my next thought. Reed awl about it hear.  But their misfortune is my gain and, I'd like to think, ultimately for the greater good, because it provides a small peek through the window of humanity's home and instead of feeling like a creeper peeping tom, we feel connected to one another. It's a good thing.

A few days ago, I wrote Val a message on a postcard.  I went out and had it in my possession to mail it but I had to pause to dig around in my bag for something.  All was set straight and I set on my way. It wasn't until I was coming back from my outing that I realized I hadn't mailed the postcard, it wasn't on my person, and i must have dropped it in the bag kerfuffle.

My immediate reaction was like, oh dang! And then, what are the chances it'll still be where I think it fell? Thinking I might be able to swoop and pick it up on the way back. It's happened before (with a mitten, just fyi).   And in the time it took me to get there, I pictured it falling on the spot I thought.  I then pictured someone,  intrigued by the chance of catching a glimpse of humanity, picking it up.  I then pictured that someone being overjoyed (for surely if they stopped to pick it up in the first place, then they are a fellow-note-picker-upper, or word scavenger, you might say) because what I had sent would be the IDEAL  on-the-streets-of-NY find (man I love hyphens. Love you, hyphen. Looove yooooou!)    I felt a feeling of immense satisfaction swell within me, like I had done something right in the world that day, a kind of pay-it-forward (how many can i do in this blog post?) feeling.  And, knowing that Valerie is also a Word Scavenger, I knew that rather than just receive the postcard in the mail, the greater gift would be this story.   I then found myself hoping i wouldn't find the postcard there, and though i was tempted to close my eyes at the scene of the drop, I gave the area a good search and fortunately, it had disappeared.  As it should have done. It was too good.

And now I will describe the postcard and share the message inscribed thereon.  I bought some New York postcards at a gift shop that I love.  This one was a picture/drawing of old timey Coney Island, with the big ferris wheel and Luna Park written on it like it was 1920.  Pretty great.  And I wrote:

I felt an itch and realized we hadn't corresponded in a while.
Tell me if these NY postcards are too painful for you and
I'll stop.  But I liked this one because old time-y postcard-
Coney Island is basically the only kind I can stomach.  It's
its best form, anyway.
Heart ya,
Jen.


What?? A NY postcard talking about New York, dropped on the sidewalk in NY?? Goldmine! I would have shouted "jackpot!" had I scavenged this item and I'm pretty jealous of whoever did.

My last thought on the matter and the cherry on this little experience was that if she does, in fact, get this postcard in the mail after all, then that will mean that whoever picked it up read it, smiled, and dropped it in the mailbox, sending it on its way.    And wouldn't that just be supreme.

You can bet your bottomest dollar that I'll keep a weather eye out for this. Fingers crossed.

Speaking of correspondence, jenpal, I sent something recently. Hopefully you get it sooner than later.