A couple of weeks ago Sean, Julian and I were walking to the zoo here in nearby Prospect Park.  Along the road and across the street was a hill. On that hill I saw something strange and foreign to my eyes, some unidentifiable substance that had a purple'ish hue. I thought it might be trash or perhaps some kind of toxic material strewn about.  Bewildered, squinting my eyes in an attempt to make sense of what I was looking at, I asked Sean,

"What's that purple stuff over there?" 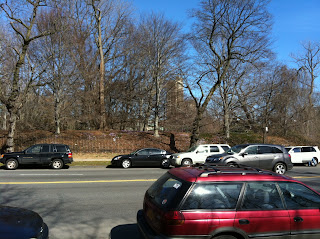 He followed my gaze and responded,  "That would be flowers."

"Wh--flowers? Fuhlllooowweerszzz??" my mouth struggling to form the word. "What is this alien tongue you speak??"

After the zoo, headed home, we walked on the other side and got a closer look. 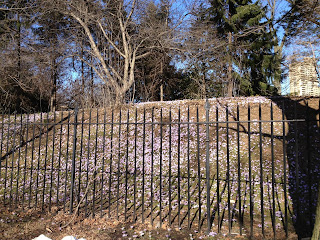 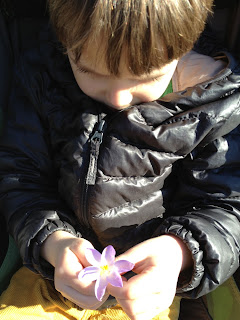 And gosh darn, he was right! They WERE flowers! I dared not believe my eyes. It had been so long since I'd seen such a thing, the thought that it could actually be a living, growing thing meant to beautify the earth did not even enter my mind. Absurd!

We had a good laugh at my completely sincere and earnest question at the beginning, and slowly slowly I am getting used to seeing more strange stuff poking up here and there.

Are you *sure* they're flowers? Probably an April Fools Day joke.

I wouldn't put it past March.