Today is Julian's half-birthday. It's nice because if we want to celebrate something, we can, which is a nice option for the worst month of the year.  But we don't have to, so low pressure too.

To celebrate, let's talk about the little squirt. 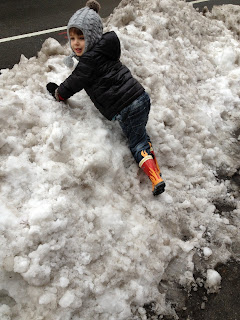 A nursery rhyme I overheard him reciting while playing:

Yes sir, yes sir, 3 bags full,
one for the little boy who lives down the hole.

That poor child! Well, at least he'll be warm.

Christmas song, to the tune of Jingle Bell Rock:

Now we know why he loves mannequins so much! Man, I love this kid. Everything he says/does is the most adorable, clever thing imaginable. I had a stupid grin on my face the whole time I read this gem of a post.

Night breakfast? Yes! And the little boy who lives down the hole? LOLed.