On Jan. 1 Sean and I cleaned out our movie cupboard... what on earth? That can't be the best terms to use.  Our..video display.  Our...cinema shelf.  This is idiotic.  But i can't think of anything better.  Anyway, where we have both DVDs and--believe it--VHS tapes.  We don't have a VCR anymore (it broke :( ) but we kept the VHS tapes.  Finally, 20 years after everyone else, we decided that maybe, just maybe it's time to join the 21st century and give them up.

I have to tell you, I'm not very ashamed of this. Yes it's ridiculous but I am always far behind everyone else, technologically speaking.  Not as far as the furthest person, but I am always slow to move on. There's something in me that really fights it.  I don't want to be just another lemming slipping into the technology flow just because it's happening.  I want to choose my own time.  So Blue Ray? No, what is that?  DVR, no.   And it's just fine with me.  Gives me a bit of solace in this crazy world we live in.

So some of these videos were awesome and I was sad to see them go because it was our only copy of Clueless, even though we can't actually watch it.  So i started making a list of all the VHS titles we needed to buy DVDs of, and it is quite an interesting list.  So i took a picture of it.  Also, and i don't know why I care, but my handwriting sucks. I was lazing on the couch with the paper resting on a tape while Sean dug them out and Julian thieved them and hid them around the house.  That gives you a good visual at least. 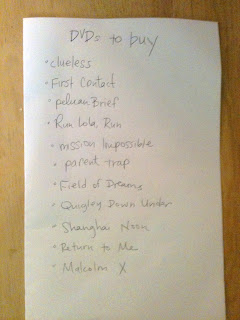 I'm not even sure what to make of this list.  Many of these are very dear to me. It's quite a collection, isn't it.  If i were to take them, title by title, and share a sentiment, it would be this:

Clueless:  Hands down the best movie of the 90's.  Somebody dare to think otherwise.

First Contact:  Are you kidding me? Best Star Trek NG by far.  The day i saw this was the day my greatest fear was realized (that the Borg were back. They were back!!)   Outstanding. I also loved the music on this one. I can sing it now.

Pelican Brief:  For some reason, when I saw this movie, i fell in love.  I loved the intensity, the story, everything.  I can't even really explain why. Julia Roberts?  She's ok.  Denzel? Fine.  No one's great (except Stanley Tucci is in it, did you know?)  but I loved the movie, and the book.  I also saw it when I was 13 which, as we know, was a very pivotal year for me. Thanks again, John Grisham.

Run, Lola, Run:  I don't even know how we came to have this one in our possession. But it's fun, it's in German, it's fast-paced, and was the birthplace of my dream to someday have hair this color.

Mission Impossible:  Everyone loves this movie. It was a huge blockbuster.  To me, it pays homage to Tom Cruise in all his Cruisiness and the fact that, no matter how much we like to make fun of him,  he is fun to watch.

Parent Trap:  Love this movie so much.  Many of these movies were mine as a child, and treasured possessions.  So you can see why i hung on to them for so long.  And this one is a classic, tried and true. I don't even need to go into the reasons why because you know. You already know.

Field of Dreams:  Don't even try to tell me you don't like this movie.  It is pure movie magic. I love small town country farmer Kevin Costner (he should always play roles as a sort of bumbling  nice guy everyman).  And possibly the only baseball movie I like.  Except for maybe Rookie of the Year. C'mon, a kid joins the pros!

Quigley Down Under:  I don't even know what to say. First, love cowboy Tom Seleck, and of course don't forget that Alan Rickman is in this.  And for some reason, it keeps popping up in my life. Small references made here and there.  It happened over Christmas.  My sister was playing some weird old folk song on the piano (from an old folksong book) and i said "that...is something.  That..."  and it took me about 3 more minutes to come up with it. That it was sung in Quigley Down Under.  I have a pretty good musical [from movies] memory.  I'm just saying.


Shanghai Noon:  I want to be embarrassed that i like this movie, but then it was on TV a few days ago after I told Sean how funny i'd thought it was back in the day, and guess what? It's just as funny.  And it is also the first Owen Wilson movie i ever saw and i kind of loved him in a big way.

Return to Me:  When i saw this movie when i was 19 or so, I realized that there  could actually be some romantic comedies worth loving, and I myself subscribed to a few chick flicks.  It could have been a bit of a catalyst for me, for it would be a couple of years later when I would timidly request from my sister her VHS videos of Pride and Prejudice. And that, as we all know, is a huge moment in anyone's life. If you haven't had yours yet, we're all waiting.

Malcolm X:  This is Sean's. I haven't seen it, but he says it's soooo good.

My sister-in-law handed down a bunch of classic Disney movies on VHS like Pinocchio and Peter Pan, etc. and so when our VCR broke last year, I just went and bought a new one. I know! It felt so weird going through the check out with a VCR in 2012. It's actually a VCR/DVD combo. But it was dang cheap so that was nice. I just couldn't get rid of all the VHS tapes. I don't know if I ever can. They still work perfectly! Oh, plus I also have Parent Trap on VHS. A little treasure I bought myself when I was in high school.

Oh man! Now i'm regretting getting rid of them! :( Of course, a VCR/DVD combo! In a few years, they will be collectibles too. CUSS.

Getting rid of the VHS was a two-staged process for us. It was also a memorable/sad experience and I, too, made a list of movies I needed to buy on DVD. The first go-around was mostly the Disney kid VHS when we moved from Laramie. Our VCR went kaput. I had intentions of buying another combo, but I gave up. I knew it was time to relinquish my VHS movies... "Return to Me" and "Quiggley" and "Field of Dreams" were/are on my list. Some I'm not to keen to replace, but most of them are good friends. They kept me company at college. Other's I remember off the top of my head... "Ferris Buhler (sp?)", "Jurassic Park," "Willow," "Monty Pyton and the Holy Grail," "Beaches"... I wonder where my list is now... It's funny how many memories can be tied to watching a good movie.

So true!! WILLOW! Best movie ever. And so hard to find! I love hearing about people's VHS memories...