Alright, listen. I'm an observer.  That's what I do.  I sit and watch and think while I watch. And I've discovered a new phenomenon. Yes, that's right. ME.  No one else, ever.  Alright, it's nothing new, and there may be varied forms of it, but I'm naming it. Something that is increasingly adding to my amusement and bewilderment is parents who talk to their kid, but for others who may be watching.   I brought this up a few days ago with friends and they confessed to being guilty of this.  One friend said one disciplinary technique her husband uses on their kid is to clap loudly.  She said it is effective and the result is immediate tears.  The problem, she said, is that she worries what the neighbors might think when they hear a loud clapping sound that sounds very much like slapping, immediately followed by crying.  So she responds by loudly over-explaining the situation to clear up any questions anyone who overheard might have-- "Oh, did Dad's clapping startle you? When Dad CLAPPED HIS HANDS?"

While this is most humorous, this is not quite what i mean. It's kind of difficult to explain, because it's so subtle, but I'll try, with a few examples.   There is this subtle line that parents cross to when you just know (or at least I think I do) they are no longer really talking to their child, but to those around them.  And while it amuses me, it makes me feel a bit sad, feeling like they're using their child as a prop.  It's an easy thing to slip to, and i guess we could all be guilty of it at one point or another. I guess.  Here's an example:

Sean and Julian and I were at the pool a week or so ago. It was lunchtime so we wrapped our towels around us and gathered to the eating area and sat at a table for some food.  While there, a mom holding her kid walked by the table and there was a quiet mumbling but this went largely unnoticed, as i was focused on the eating.  It then became clear they were trying to get our attention so I turned and apologized and the mom had the kid (who was 2-3) say again, "could we share your table?"   I responded, "of COURSE!"  and big smiles.  Meanwhile on the inside, i was frowning and tsking.     It wasn't a big deal, but it was a little weird. They were just standing there awkwardly waiting for me to hear their son's tiny sweet voice, making him break the weird ice that didn't even need to be broken.  Don't make your kid talk for you.

But this isn't really what i'm referring to either.  I feel like there were several moments but i wasn't paying much attention, but at one point while we were sitting and eating, i kept hearing the mom say loudly to her son, "Who taught you to not put your elbows on the table? Who?"  Not in a reprimand, but a "please son, make us proud."   This was repeated maybe 4 times.  And loudly. Your kid's in your lap. How loud do you need to be?  And sure, often we are really just in our own little world, trying to talk to our kid, get his/her attention, resolve an issue, deal with tantrums. But after the 4th time, I was skeptical of that.   While at first i was sitting like this: 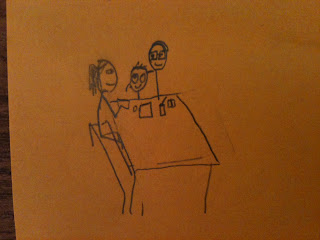 By the 4th time, I had slumped even more resolutely: 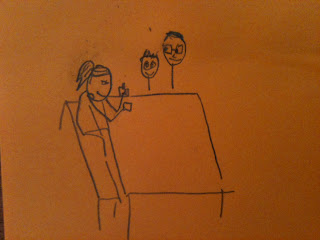 I wasn't at all sure if her comment was aimed at me. It seems ludicrous to think that it was. perhaps she was just using my bad example as a teaching moment.   Perhaps she assumed I immediately recognized her in the midst of a teaching moment and was waiting for me to play along because not only are we both members of the Mommy Club, but of the Mommies With Kids the Same Age Club. Maybe her kid really did know better manners and she wanted to show off his skills. But guess what? I just don't care. Neither does your kid. And you're really loud.

I'm trying to think of another example.  I'm not sure this fits my description, but again, maybe there are different kinds.  A while ago Julian and I went to the children's museum.  We were sitting at the sand, playing with trucks.  Click here for a visual. I was on a stool, wedged in the crevice by the yellow bucket.  Around me were a few kids and their parents/grandparents.  One woman and her father(?) was there, along with her kid.  Another mom(?) and a grandmother(?) were there with their kid. One mom asked the other "How old is he/she?" (I can't remember)  They responded, "21 months."   "Oh, ours too! When's his/her birthday?"   "Halloween! when's yours'?"   "September ___.  So.. uhh.. I can't remember if it's 20 or 21 months."     (me:  ?)   This went on back and forth for at least 5 more rounds, about their kids' age and birthdays and it just got so inane--i couldn't help myself-- i actually looked up at them with this expression on my face: 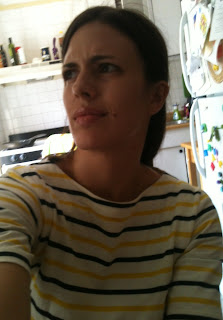 I know this makes me seem like a jerk, but C'MON.  Stop the madness!   This is probably not so much Performance Parenting but Caught in the Trap of Kiddie Small Talk, the kind that makes my brain slightly effervesce and then wither.  Nobody noticed me anyway. They were too busy talking about 20 or 21 months.  I wish i could remember the exact conversation because it seriously was ridiculoso, even for Kiddie Small Talk standards. But also, i'm glad i don't.

I wish I had more examples. But you know what i mean, right?? Have you had any experiences? It's just so interesting to me. Oh the phenomena around me.
Posted by )en at 5:33 PM

I totally know what you mean. About performance parenting. And, no, I can't think of any examples. But, I do know what you mean. All I want to tell them is, hey, don't worry about it, no one really cares. Once you have a kid, you sort of become invisible. Other parents are dealing with their own kid, and people without kids just see you as largely irrelevant. Which sounds kind of sad, but is actually really liberating for me. Me and Edie just do whatever the crap we want.

Also, as far as the inane kid banter, one thing that I really hate, that I-I didn't even have to swear to myself that I would never do it, because it's so stupid I never would- is use your baby to talk to strangers. Like, before the kid can talk, and you sort of talk for them, like, "baby says hello", or, "baby says bye, bye". "baby says thank you". You get the picture. If someone tells Edie how pretty she is, I always say, thank you, from me. Not Edie. Because she's a baby, and she doesn't know she's received a compliment, and even if she did, she can't talk, and we both know it so just talk to me.

This is more like a blog post in and of itself, but I just wanted you to know I know how you feel.

I also wish we could be having this conversation while we ate Ample Hills, or pushed a car around Costco.

Yeah, I know exactly what you mean, too. The scary thing is that I know I can be guilty of it, and I try really hard to not do that. The worst was the entire month of July when we were with my in-laws for two weeks and then with my parents. My in-laws' kids are super well behaved (and also quite a bit older than my kids and mostly all girls), so every time my kids were being their usual crazy selves, I'd feel this self-conscious need to make them act like their cousins, EVEN IF THEY WEREN'T DOING ANYTHING WRONG.

I had to work really hard to curb that feeling. And to not feel like I should be apologizing or something. And to not stress that they were judging me all the time. And then there's my Dad, who hates to have any noise at all. Try keeping three kids, ages 5, 4, and 1 quiet for a whole week. That was also kind of awful and ridiculous.

But I hope I never care what random strangers at a park think of my parenting!

I get to witness it all day at work! Good times...my favorite is when I give the diet and hygiene speech and they turn to their 4 year old and say, "are you listening, the dentist is talking to you." No Mom, I'm talking to you! As if I will be duped and think, "clearly this is an excellent parent, and this raucous child is clearly out buying candy and pepsi for himself, and neglecting his oral hygiene!" or when they have cavities, and they say to their kid, "I told you to not have so many chocolates." as if any child im the world will refrain from chocolate when given free access. Be a flippin parent! They must think I'm an idiot.

I know I'm a more consistent parent when others are around. You know how when you call customer service the call "may be monitored for QA purposes"? If parents had a system like that maybe we'd be more consistently consistent. We wouldn't know if someone else was watching.

Never mind; that's too creepy. But you know what I mean.

Oh man. Whenever people would ask Julian questions (and even now), i would stay silent for a few seconds too long because i was taught not to interrupt two people's conversation. It's weird! Just ask me. The delay is more appropriate now that he can talk, but still. You're dead right about that.

What I also enjoy is unsolicited tips/advice/warnings. They amuse and entertain. It's actually appreciated if it comes from a kindly elderly woman because then i can pretend we have a grandma nearby.

Has anyone gotten any totally awesome advice/warnings from strangers? One lady walking by saw Julian walking somewhere on something (we were outside a school) and she said, "be sure he takes off his shoes when you get home! There's so much bacteria there!" I marveled and pretty sure i remained silent. Let the Crazy have their moment.

Rob, i loved this. Awesome! You should just do the same and tell the kid to tell their mommy not to give them so much candy. Yay for passive aggression!

Joel, maybe you DO have a hidden camera in your home. you don't know!