The Squeak of Humanity II

A week or so ago Sean came home somber and disturbed.  Ok, not exactly, but he told me a somber and disturbing story that came with a picture, and waited until the end to reveal the picture, which is exactly what I will do here.
He said he was walking to the train after work and noticed a few people had paused to look at something on the ground.  He saw something furry, deduced it was probably some foul dead thing and didn't want to linger too long looking.  But look he did, and continue walking he did, until he realized just what it was he had witnessed, and so disturbing and jolting to his core it was that he had to double back and take a picture.  As he did, a man standing nearby said, "it's traumatic and disgusting at the same time, isn't it?"
And here's the picture. 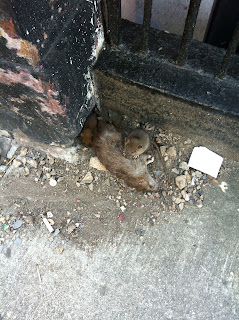 What we are looking at are two rat babies pawing at their dead mother who, Sean thinks, was poisoned in the underground and, struggling to breathe, scratched its way (with babies following) to a hole leading to the outside.   First reaction: GROSS.  Second: awww... but... the babies! What will happen to them??
And it's another moment when the rat tugs at the heart strings of humans. No matter how repulsive and disease-ridden they are, they have families too.    *sob*
Posted by )en at 6:24 AM

If our cell phones had blunt object attachments instead of cameras this would have ended differently.

Come to think of it, if that were true, a lot of things would end differently.

Jen, I may or may not have tears in my eyes and my heart may or may not be breaking for the little rats right now. Why is this post here?! I count on you for laughs and to make me feel happy after Steve Jobs dies. But instead, you're giving us the saddest story of all! I have to go try and recover now.

Stupid real world, with it moral complexity and depth of feeling...

Wow, that is both sad and gross and disturbing... Poor little babies, and yet I'm glad that they try to keep the rats under control in NYC!

BTW, when I first saw the first sentence, I thought it said Sean was sober. I was wondering if that wasn't normally the case, and was quite relieved that it said somber. ;0)