As mentioned, Julian loves buses these days.  We decided it's his security word. Comfort word. If people approach him and he doesn't know what to say, he'll respond to anything they say with, "bus!"  We think it can mean a lot of things, "bus."  And when you think about it, it really does.

So a few weeks before his birthday we took him on a tour bus ride in the city. One of these.  I have done this once before and highly recommend it.  It is delightsome and informative, if you get a decent guide, and not the one on this tour who said to us (me, Sean, and Julian) who were in the back, "did you guys hear that? I was just saying that this fountain here was named after __________ who was a famous Italian."   Wow, really? A famous one! You don't say.   Here we are atop the bus. 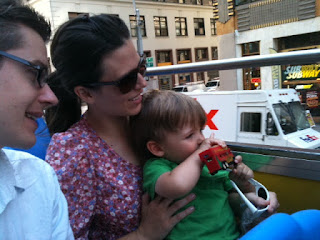 Midway through the tour, we hopped off to do some shopping.  We were in Ann Taylor Loft when I was asked to give an impromptu interview about how much i loooove Ann Taylor. 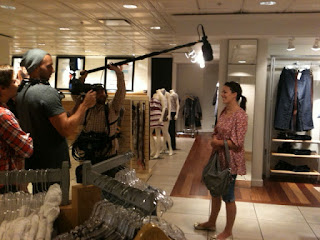 And Julian showing some sass. 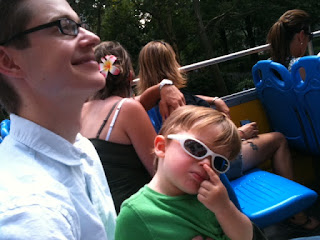 p.s. Here's how the Freedom Tower is looking these days: 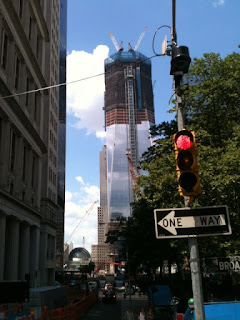 We were shocked at the progress. Had no idea.

NY TIP: if you've never done NYC, and want to, and want to see a lot, do this bus tour.  You can hop on and off all over the city. The ticket lasts a whole day.  Make a list of  all the things you want to do and locate them on a map, then memorize the map.  In fact, i'll do it for you. Send me your list.  This would be a most efficient way to see everything you want to without having to backtrack.

We were in Utah on the actual birthday so we had a party and invited all the cousins, and what's a party without a pinata?  I'm thinking we might just have a pinata every year on Julian's birthday. That way we can tell him, "you've had a pinata on every single one of your birthdays! Even ever since you were one!"   Too bad we didn't have one on the day he was born. Oh well. We'll just say i was the pinata.  (<-- awkward)

But instead of making a pinata, we bought one. We wanted a bus but could only find a firetruck which was a happy alternative.  Julian couldn't understand why we'd want to hit and abuse a beautiful innocent little firetruck.  He was not into it. Here he cast aside the bat and reached out to the poor thing. 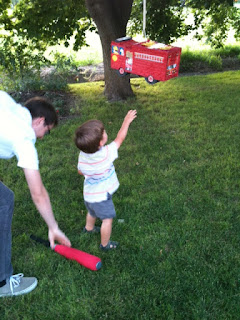 Here is a lineup of some grandkids. We're missing about 7 or so. Also, one of these is Julian's cousin on Sean's side.  Just a cute pic of kids. I just like seeing Julian as a part of an actual group of cousins, that he's actually one of them. Whenever we visit I always feel like he's just pretending, since most of the cousins live very close to each other. 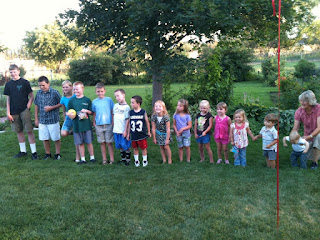 Sean and I were at the store where we bought the pinata.  We turned around. In the distance, we saw someone leave with the most amazing balloon creature I've ever beheld.  It was a caterpillar, and we gasped. We had to have it. We sauntered with our arms out toward the balloon counter like zombies.  They gave us a catalog to look through. We did and we bought some and they were glorious. 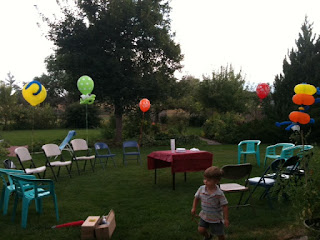 That's a doughnut balloon with a tapeworm(?) coming out of it and a cute octopus. Unfortunately the gigantor green one is off camera. It was just a plain balloon but HUGE. Also, one of the caterpillar's segments had deflated at this point.  In case you were wondering, this was at Pioneer Party Gift & Copy on Lehi's Main Street.  Do yourself a favor and while you're there, get some doughnuts at the bakery 2 doors down.

This year we made Julian's cake.  With the help of my mother and sister we threw out some ideas. Sean sketched them out and then we set to work.  Sean did most of the assemblage and frosting, as you can guess.  Here was the process:

First of all, we used 3 cake mixes. Naturally.

We just made a basic vanilla cake and, at my insistence, threw some lemon curd in the batter. When in doubt (about anything--anything in life), throw in some curd, as i always say. 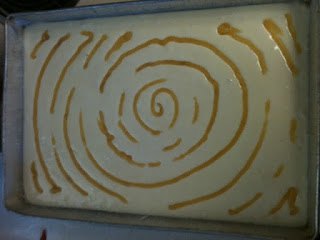 We thought it looked like a giant thumb print.

Here's the first layer: (notice the curd, and how it looks like little cake amoebas. mmmm.) 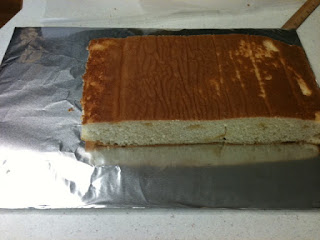 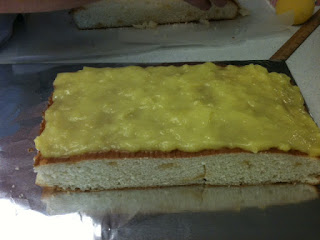 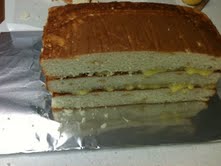 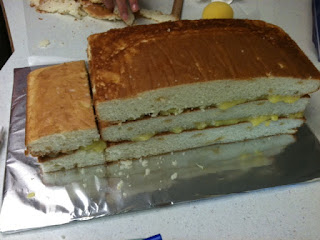 Now for some frosting, which was lemon pudding dream whippy stuff (with curd folded in--like i even need to mention) 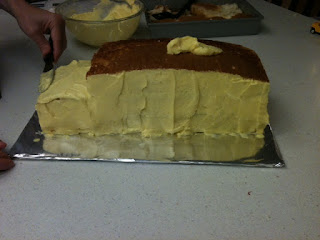 The artist works silently and meticulously. An observer observers in quiet reverence: 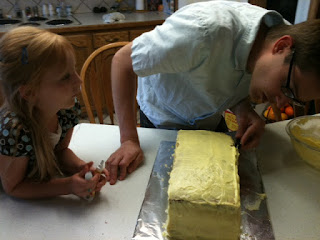 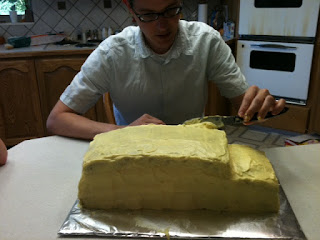 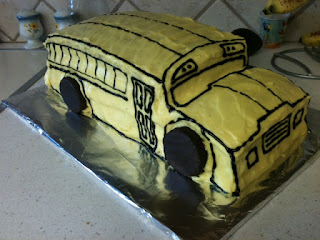 Cuuuute.  I'd like to think it's the bus the Care Bears would take to school.  And 3 cheers for ding dong wheels (my one and only contribution).  When we ate it the black icing goo mixed in and it looked like we'd dropped everybody's piece in the mud.  You're welcome!

I love the bus cake. We've never tried to make a fancy cake, but now I feel I must try it for Sam's birthday coming up.

That party store is only 5 minutes from our house. And you guys didn't even stop by... for shame.

Yeah, I'm way impressed by the cake. And any time I hear anything about pinatas, I can't help but think of this crazy website I once stumbled on: http://www.downwithpinatas.com/

The sad thing about that blog is that I'm pretty sure the guy is serious...

1. "An observer observers..."
2. I would like to report that the large red balloon is STILL AFLOAT. It's immortal. It's two weeks old and still floating around, scaring us when we walk into the string late at night.

ha ha, i saw that error yesterday. made me laugh.

STILL AFLOAT?? Holy @#$%!!! What did they PUT in that thing? And extra weird when Green died in 10 minutes.

Aww, too bad joel! we'll have to meet up one day.

What a birthday! I'm so glad he had such a fun birthday, that's really great. The cake looks amazing and so delicious. I think the ding dongs were a fantastic addition to the bus. :0). Happy birthday, Julian!!