Because Who Doesn't Love a Good Before & After?

For Father's Day, we drove into the city to The Container Store and I told Sean we were going to buy some things to organize our house. I had told him to be thinking of what area he wanted to organize. I think it was all too much for him-- he's been dreaming for years about organizing various areas, and on the list was my desk. I knew it. He didn't say anything, but I knew it.  So I really didn't intend for this to be a present for ME, but I suggested the desk, and so I guess it was, in the end. A gift for both of us, at least.
The before: 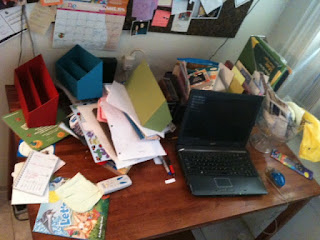 I had originally intended for us BOTH to work on it so i wasn't just making him do some work and calling it a "father's day present!"   What i love about the before pic is the organizers thrown carelessly onto the heap.
Here's what i have to say about my desk:  I have a lot of crap. But it's all very useful and important to me. I have approximately 3 trillion and one cards & envelopes that i have acquired over the past few days  years and there are also things like post-its and stickers and books and printer paper and return address labels that i can't throw away because they say things like "Jen-Sean" or "Ms Jen-Sean"  on them which I've now adopted as a moniker.
Also, you can't see it but i have this GINORMOUS bucket o' pens.  For that is exactly what it is. It's probably equal circumference of a gallon paint can and about half as high.  I have a serious problem. I know I don't need that many pens, but don't I?   Don't I?!?  What do you do with pens that work but you just have not enough too many of them? Someone told me they donated theirs to the church. That's nice. But what if one day i need one and suddenly i've given them all away???  I don't even want to imagine such a scenario.  It's better to be safe than sorry, therefore it's best to have 300.
So we started organizing it together. i was going through the piles, telling him what i wanted to save/keep, etc. I threw away a bunch of pens that didn't work (*sniff*. I'm so regretful about some of those. I feel like I'm pen superstitious. Supenstitious. It might not be working now but try a different piece of paper and then see. That totally happens, right? I tried about 3 pieces of paper, and i guess i could see the ink was low or gone on many of them, and maybe the ink tube was completely missing, whatever, but STILL. Maybe it would have worked the next day?? I just needed to give them time?? Well I'll never know. RIP) and then my attention was taken elsewhere.
Mere moments later I come back to this: 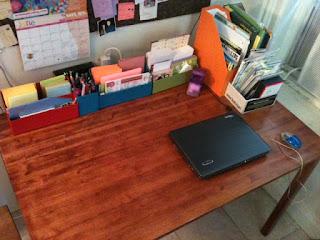 What in the...?     I knew he couldn't wait. I knew he was itching to finish! So it was a present for him all along, you see. One of those where I should just leave him be. In fact, if I were to be a truly generous person, I would make huge messes every day for him to clean up. Sadly, i'm really not that messy. I could work on it though.
p.s. See those blue envelope-shaped papers in the red container at the left? Those are envelope LINERS, people. I don't know what happened; i think i was under the paper store spell. What am i going to do with those? I don't know, but I need them.
By the way, that container of pens is a small sampling. (The pen bucket is thankfully off-camera. I don't think any of us could handle seeing it-- especially me, since it's a painful reminder of lives lost.) They're my "starting pens" you might say. The stars.  I've got some pilots, some gel pens, some mechanical pencils even. *deep breath* Ahhh... and all is happy and right in the world.

Wow, your desk looks AWESOME! But, at least for us, the real challenge is not buying the containers or even doing the organizing - It is actually keeping it organized! How's your desk look today? How will it look next week? Good luck. :-)

That's why it's the gift that keeps on giving...

This post is mind meld.
Stupenstitious! Totally a thing. I keep them for ever. Usually I mean to separate them, and warn them, next time or else. They never feel the pressure because they know I don't mean it.

How lucky to have Sean to organize your space. Jealous = me. He did a lovely lovely job.

Also, I always pick up those envelope liners when I am on 18th street. I turn them over in my hand. I weigh them with my eyes. I covet. Then I stand on tip-toe and put them back. Rock on sister. Rock on. I am so proud of you for possessing some for your very own.

I love a good before and after. Sometimes I stage before and afters of me "before" when I first wake up, in my pajamas with messy hair--and then me "after", four to five hours later when I've taken a shower and gotten dressed.

Also, the pen problem doesn't afflict me because I only use one kind of pen. ONE kind. The Pilot G2. And they're expensive, so I can't get too many at a time. But, still, I'm impressed with your collection.