Every once in a while Sean and I play 2-person pictionary. What does this mean? It means we each take a card and draw everything on it to the very best of our ability.  Then we swap papers and the other has to guess what each drawing is.  A bit slower than regular pictionary but still fun.   Playing pictionary with Sean is fun and interesting. interesting because he is a draw-er, see.  he does it well.  If i may criticize, however, this poses a couple problems or, let us say, obstacles:

1) He takes his time. As he would, normally. While 2-man pictionary is different, this is not conducive to a game that's a race.

2) He draws things that are too real. I'm not sure if i know what this means, and I don't know if i am just used to the "pictionary shorthand" i became accustomed to growing up, but he'll draw something and it will be completely unidentifiable to me because it looks too good.

3) He has a thing about size and proportion.  He'll take an entire sheet of paper to draw a thimble and i'll say, "what the hey is THAT?"   But i can't really think of any other examples, so maybe it was just a fluke thimble. And it's not like i expect people to draw a house to scale (unless it's a mouse house).  So i don't know. This may be unwarranted.

All of that said, it is fun to play with Sean and we are usually a pretty compatible pictionary team. Usually.

Not so much the other night. 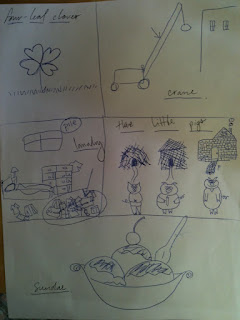 We allow ourselves to draw lines depicting the number of words. All you have to do is fill in the blank(s).  Sean got all of mine except for one--pile.  But that was understandable.

Here are Sean's drawings.  Now: Was it just me?? What happened here? I guess i did ok-- I got 3 out of 5.  But the others? I think it was just me.  For some reason i was NOT getting his drawings. 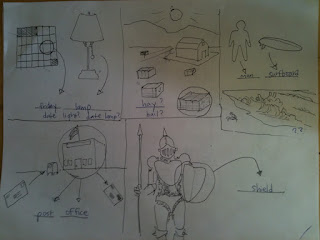 I've often thought that the better artist you are, the harder Pictionary becomes. But if you take away the time factor, that could be really cool! I love Sean's knight...

The knight IS super cool, but he looks kind of hairy under his armor. :D And, are you going to tell us the right answers to Sean's?

The first one is daylight. I so had no clue.

The 3rd one with the amoeba man is body surf. What?? Yeah right. He was like, "see those people happily body surfing in the ocean??" I said, "What that? You mean the poor people being scrambled to death?"

In his defense, it would be hard to draw just a vague "body," but i think in this one, the context would have been better, aka the scrambled men.

Those are some pretty awesome drawings, very impressive! They're both way better than my stick guys...