We finally made it to the weekend. I finally made it to the weekend. Those were the longest 3 days of my life.  Though the job isn't over, Sean will now be here with me which of course will change everything. For example, he is now downstairs with the kids and also fixing the clogged toilet while I sit here blogging and eating chocolate edamame.
That's the good news. The bad news is that it's cloudy today which means rain's-a comin' which means the workers are now hammering sheets up all around the house to protect it from getting wet.  This room I'm in now has windows on 3 of the 4 walls and they are all being hammered on as I type.  I am surrounded.  Also, the windows don't have any curtains or anything so they can watch me blog from 3 different angles while I seriously run the risk of getting a hammer to the back of the head since it sounds like they are going to just bust right through the wall any second now.   We just put a seriously sleep-deprived Julian down and if he sleeps through this, I will throw him a parade. Mark my words.  It's deafening. I can't hear myself think. It's just so beyond comical at this point. What next? I'm eager to find out. I'm kind of hoping they've scheduled to completely demolish a wall and that at some random moment a big wrecking ball will come bashing through, narrowly missing us and spraying debris in our faces. I'll let you know.
Other good news: Friends of our charge are coming to pick the kids up for a sleepover. PRAISE THE HEAVENS.  How will we spend our time alone? Go grocery shopping and clean this house. I really need to purchase or borrow a broom. I've never been so desperate for one. Well, not including that one time.
Even more good news: The bath is finished! The shower doesn't work but now we can bathe in a real live bath. In a way though, I'm gonna miss Old Rusty (the sink).

Meanwhile, Julian has gone into the great beyond.  Beyond retaining his marbles, that is. Seriously, i just know that for the next two days we'll do our best to maintain his physical health and then get some serious therapy upon our return. He'll be like a soldier who's been traumatized by war. I wouldn't be surprised if he slept for 24 hours straight or something and took a few days to "come back to us."   We'll see.     I have enjoyed watching him interact with the kids though, who are super sweet with him. He'll probably miss them and having a bit of hubbub, at least a little bit, in his way.
This morning for breakfast we had pudding pancakes. Just slab on some chocolate pudding. It's pretty good.  And then i use Gogurts as treats. Ha ha. I'm going to mess these kids up. Something else i don't mind: making lunches and little food plates. I brought my dino-sandwich cutter which would make anyone happy.  And i like to wrap things up in tin foil and make mystery packag--AAAAGHHHHH!!!  Ok, this just in:  Someone hammering on the outside just sent toward my skull a rusty antique pioneer device (?) that came crashing down from the top shelf that's against the wall i'm leaning on.  BOOBY TRAP!! Of course! I should have known! I should have seen it coming. CURSE my carelessness. I should never take my guard down. Constant vigilance, Jen!! At first, after I recovered from my heart attack, i saw the rusty device and was congratulating the Construction on their well-played move/trap that i walked right into. Then Sean came in and we saw that it had actually first hit the homeowners' laptop, leaving a serious dent: DOH. 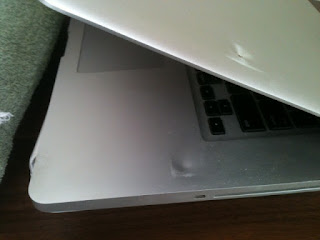 And here's the 100-ton rusty thing: (seriously, what is that thing? And why?) 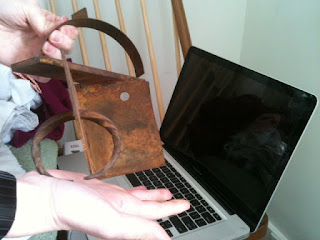 And a zoom-in on the screen: 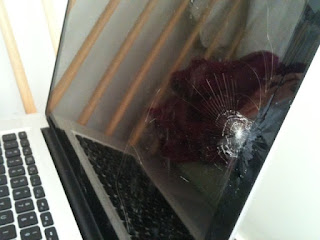 Sonofaaaaaaa....!!!    I think I can say, on behalf of our friends: @#$%!!   Now: Am i secretly glad this happened, as payback? No.  And i'm glad. I'm glad I'm not quite the monster I thought I might be.  Am I glad it wasn't OUR computer that was resting right on top of it? Yes.  But it's ok to be glad about that, right? (wait a second. Blogging just saved my [computer's] life! I knew it would, somehow!)   Dang. Totally sucks though. There was a big book on top of it too and had it just been a few inches over, it would have been saved. Totally bites.  Well, I hope they're enjoying Italy.  I feel not happy about this event, but am now feeling better because a) they must have been dying for this much-deserved vacation and b) look at what they get to come home to.  Whew.
So that's the excitement going on at this moment.  Julian nap update, which i know you were dying for: Still asleep.  In a coma, more like. Ha ha (sad. :(  )
p.s. a book just fell. I'm so jumpy! I guess we should take things off the shelves.

If you ask me (and I know you want to), you should vent your frustration by beating up some more of their possessions and blaming the construction. "Oh, that hideous painting, um, fell off the wall. Into the garbage. After burning itself somehow."

It was really insightful.
Thanks for such a nice content.
Cheers
BTW if anyone interested more have a look sawfinder.com thanks