Ah, the Friday before Thanksgiving.  It could possibly be one of the best weekends of the year.  If you work at it, you can train your mind to just stay in weekend mode and coast right through the first few days of the next week until the holiday.   What, it's Monday? no big deal, this week is so short, it is kind of a Friday. So is Tuesday. Wednesday IS a Friday.   Living a life where I largely feel like i have to survive from one day to the next, this is a happy thing.
Question: Why does my baby cry and cry and wail in his bed because he doesn't want to sleep, only to play for 10 minutes and then calmly go down without a fight? Why?  Did he just HAVE to play with his books for a few minutes longer before he could feel really fatigued?  Why, Julian. Why.   Or does he just do it for the sake of the win, and while he puts on a facade that he truly did want to stay up and play, he's actually relishing his victory over his poor sucker parents, gives a few minutes just to prove his point further and then finally, on his terms, relents and sleeps because he actually was tired all along.   I think this theory is most likely.
What are you making for T-giving? Is someone making THIS? Because someone has to. 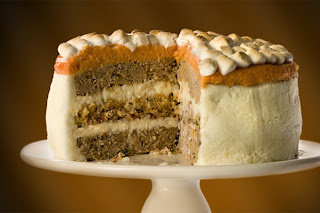 It's a cake made out of layers of stuffing, turkey, sweet potatoes, topped with marshmallows and frosted with mashed potatoes.  So disgusting, yet wonderful.
A small list of things i am actually thankful for at this moment:
So I got some flowers recently and one got away from the bouquet so i tried to find its own vase. I own approximately 0 vases and threw it into a water glass.  I walked by it the other day and at first it made me laugh.  So sad: 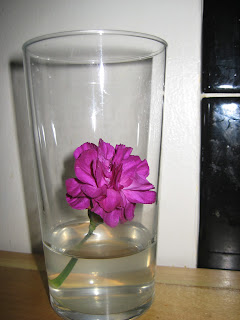 But now I've changed my mind.  This is kind of awesome, isn't it? New favorite way to hold a flower! Also, it lived for like 2 weeks I swear.
This is a hodgepodge post. It isn't very funny or remarkable or even thought-provoking.  But if I were to end on any kind of note it would be a C#, because it's my favorite.
Happy pre-Thanksgiving weekend.

p.s.  The title of this post is a shout-out to my sister who once said this while leaving a message on someone's public answering machine.  Meant to say "that'll be great" but jumped the gun? Irregardless, it's awesome and a mainstay of my vocabulary.
Posted by )en at 11:30 AM

I'm choosing to be grateful that Craig gets all of next week off, rather than being annoyed that he also won't get paid for those vacation days.

And just for the record, Natalie has mentioned more than once to me about how awesome you were about watching Samuel for her when she had to do physical therapy for her pregnancy-induced carpal tunnel syndrome. So I think the universe owes you some good babysitting in order to go see Harry Potter!

I used to eat mini-bananas in Africa and loved them, but I've never seen them here. Apparently I'm not shopping in the right places...

How have I not heard your beef about Hermione before? It was great, by the way - no need to worry about it sucking. :)

P.S. don't think of yourself as being shallow. One of my biggest fears is having really ugly babies because I'm afraid I won't love them. Eek.

Just pointing out that I was thankful...in case whomever I... I mean your other sister...was leaving the message for didn't know. :)

What? I really am.

Well, i saw Harry Potter. Maybe i'll do a post on it because we all love movie review posts.