So yesterday was "one of those days."   I'm sure you know what i mean.  When you've been trying to make your way up the mountain and you keep slipping.. slipping.. until you realize you're "at the end of your rope."   Ok, i have no idea what that analogy is supposed to reference.  Would it be the other way around?  You're climbing up until you reach the end of your rope, and now what? Somehow that scenario doesn't sound quite so desperate to me.  That just sounds like you've basically accomplished your goal with one minor hiccup.  Plus, obviously i don't really know what mountain climbing is like.
What else could it mean? I know i've gotten sidetracked here but i'm kind of determined to find something that makes a decent amount of sense.   I'm reminded of the cartoons where they've tied something they don't want and tried to get rid of it a horrible way only to realize they're caught in the rope, but i don't really know how to incorporate the "end" of the rope.. and why it would even be their own personal rope anyway?   Hmm.   Ok, so you're in a bad situation and you find yourself at the "end of your rope."   When would i be using a rope in an already bad situation? Or did it just get bad? Is only the end bad?  Can someone help me? I'm now at the end of my rope trying to figure out what "end of my rope" means.
Anyway, back to the original thought.  So, one of those days.  At my wit's end. (<-- uh oh.)  (j/k, moving on)  And, like the title goes on to say, desperate times call for desperate measures.   You know how you have those moments, when you're at the end of... something, and you feel like you're going to explode? Often you want to scream at the top of your lungs or punch someone in the face, or whatever?  Well, i was walking by the counter and, feeling those bursting feelings, suddenly seized the unopened container of Bubble Tape bubblegum and had wild thoughts of shoving it all into my mouth at once.  Yes, friends, i guess this is something i do when i'm at the "end."    Except after studying it i thought, there's no way i can put that whole thing in my mouth.  I mean, that's 6 feet of bubblegum!  And then i thought, what a waste it would be. But i don't even like this stuff.  So, in case you were wondering, here's what 6 feet of bubblegum looks like torn right in half. 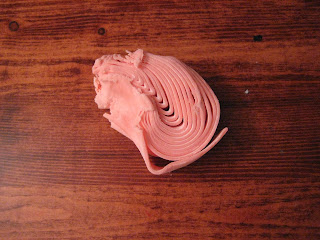 Madness, i tell you.
So then I put 3 feet of it in my mouth and chewed and chewed. Now, i never chew gum.  So this is a new sensation in and of itself. Not that i've never chewed gum, but it's been years and years.  Anyway, and... wow. Bubbletape is what i would call your poor man's bubble gum.  It ain't no Bubbalicious, that's for sure.  Here is what 3 feet of masticated bubble gum looks like, just in case you were wondering about that. 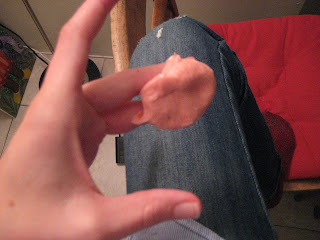 I should have spread it out more. That was one big wad of gum.
Siiiiick. And not just the quantity but the flavor!  It's like I gargled with a giant gulp of cavity mouthwash.  I had to rinse out my mouth with water three times before feeling like it was safe to swallow.
And that was that.  It did the job... for now.   We'll see what crazy event takes place the next time this happens.  I hope there's a giant doughnut lying around when it does.

Maybe you're making your way down a difficult slope or cliff and all you have to keep from falling is a rope, and then you come to the end of it. THAT is a bad situation.

Bubble tape is no solution to stress. It's Diet Pepsi.

Diet Pepsi sounds like a bad situation but you're right, Bubbletape is def worse.

Remember Big League Chew? Is that stuff still around? You should try some of that...

Can't you just punch a wall like everyone else?

My solution is always Reese's Peanut Butter Cups. Friday night Ryan had a scout campout (until noon on Saturday and I had Primary Presentation Practice from 10-12noon) after having regular scouts Wednesday night and Scout training on Thursday night. (No exaggeration of THREE nights - and a morning - in a row of SCOUTING), and I downed two PB cups without any guilt. I needed a boost. Sometimes "wit's end" sitations need... food.