Julian got his first bad sunburn this summer. After much cajoling and refusal to reapply the sunscreen. The good news is that after all of this he admitted to learning his lesson. The bad news is that the sun damage is done, isn't it. But here's a dialogue:

"It's peeling a lot.  I've named all the islands of skin peel. Like these little ones are the St. Edward Islands. I just lay in bed, naming everything."

I just lay in bed, naming everything. I always hear his bizarre phrasings on a much grander, more profound scale. Everything's a metaphor for life. Or something.

JEN: Aaah, cleaning out peanut butter jars is the worst!

SEAN: I know! I'm like, is it really better for the environment to recycle this peanut butter jar if it takes 50 gallons of water to rinse it out?!

These days, Julian has a propensity to say things that feel...unsavory. Nonsensical. Disturbing.  I have to put all my faith in the belief he knows better but is a hapless victim of his own developmental phase. But so are we all. So are we all. And, at a total loss, sometimes I just resign myself, and do not delight much in the record-keeping. What the crap kind of question:

JULIAN:  Hey Ma, do you think when AI becomes sentient, you'll be racist toward them?

JULIAN: I think I already am. Go back to the motherboard!

p.s. I asked my actor friend to give me a "weary/repulsed" face which is how I felt when Julian asked me this question. (See the footnote to this post for more info on a favorite made-up game) Of course, no questions asked, she promptly responded. Actually, I'll just paste the text screenshots. Too funny: 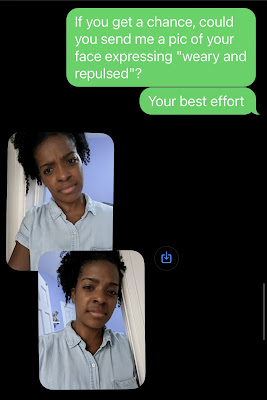 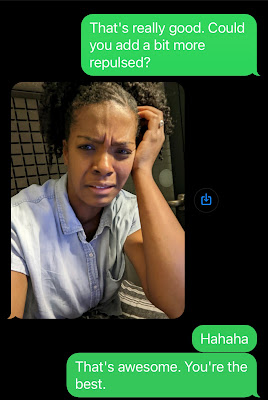 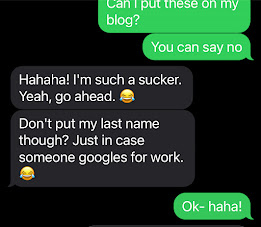 I can't quite remember what exactly we were talking about here. I think it was probably Britney Spears (likely) and how I feel super uncomfortable witnessing something troubling that isn't being acknowledged. Or something. Again, I don't totally remember. But I did write down a brief description as noted following this quote:

I wish I could remember the details because it was incredibly profound and accurate-sounding. Whatever he was talking about, I think it's totally true.

Lately Julian has stumbled on some weird thing online that is like a gallery of scary monsters? And there are stories to go along with them? I don't even know. This does not paint me in a positive parenting light but I do sort of feel like he is reaping his own consequences here, seeking out scary things and then being haunted by them at night, when it matters.  I tell him these things every day, to no avail. I've verbally banned this website but have not physically enforced yet.  In the meantime, this quote was beautiful.  He meant it literally but I heard it symbolically and, once again, wrote down the accidental prose this boy is so oft prone to speak.

"I'm haunted by the monsters that I search for."

It's good, right? I hope he isn't too upset when I publish a book one day full of stolen Julian lines.

Sometimes I bemoan my life and the lack of meaning I feel on occasion. Recently Sean and I saw  a documentary on Leonard Cohen, the poet/songwriter behind Hallelujah. The title of the documentary is Hallelujah. Anyway, it was so good. I kept pulling out my phone and recording so many things (which probably made for a fun movie experience for those around me). In fact, I should do a separate post about it. Good art and listening to artists invigorates my soul. But for now, Sean and I were discussing his life and how full of these wild adventures it was. At one point, to cure what ails he found himself in, he spent 5 years in a Buddhist monastery.  We learned a bit about how difficult it is to do that, what it requires, demands, etc.  How you shave your head. Don't see your family, etc.  I expressed a weird desire to do something like this, to go through something difficult and transformative but in a deliberate, maybe for-a-fee way, that gave my life meaning.  He said to me,

"Having a kid was your monastery. That was you pushing yourself. You should have shaved your head for ten years."

And I was like, by gol, he's right. I should have.  I liked the comparison he came up with there. Somewhat relatedly, I myself have compared children to horcruxes on multiple occasions, but that's a post for another day.

This one I overheard and it just made me laugh. Julian was in the kitchen conducting some weird experiment that I didn't fully understand until the end:

Random conversations out of nowhere are par for the course around here. It's more like being lasso'ed in on the middle of an intensely complicated and/or bizarre thought train, whether you like it or not. And you're not really a participant, just a warm body with ears, an innocent bystander caught in the snare.

JULIAN: I dunno, just the Civil War and stuff. I would like to go back to the 1880's London though...

JEN: Why? Industrial Revolution and all that?

JULIAN: It'd be awesome to be there though.

JULIAN: No... [total dismissal of my reply/valid points] but maybe 1880's wouldn't be so great because of Jack the Ripper."

JEN: Ah yes..that would be a big drawback.

JULIAN: Yeah it would.

Half of me wants to explain to him he'd probably be fine because he likely would not have been targeted, so go ahead and visit 1880's London--reach for the stars. But the other half is like, what...is...happening to me.

Early in the summer, Sean and I were discussing music we've finally admitted to liking and he went off on this lovely soliloquy:

"I've been thinking a lot about Counting Crows the past few months. Because I liked them, but it became clear that they're just not cool. Their music just isn't cool. It's whiny and emotional. It's beautiful.  It's really good. But you have to be aloof in order to be cool. No one will say, 'This guy crying in the corner over here is really cool.'  But if you like the music, you like the music."

If you're imagining me trying to appear totally engaged and listening whilst rapidly tapping away at phone, you have an accurate picture. He never knows what I'm doing at first. To him I've just suddenly decided to grab my phone and vigorously browse or whathaveyou. But I know how it looks and explain myself and tell him to keep going. But he was really in this one and hardly noticed.

To close, Sean gave me this gem one hot day. It felt like a pretty good summer summation (ha):

"There's something about a garage refrigerator that intensely reminds me of summer, as a kid.  The unguarded place in your friend's house where you may find a treasure."

I guess he has memories of other people's garage fridges. But we have one. It works half the time, and he's right, it is magical.

To really close, here's a picture of another summer relic: The whiteboard summer chore list I made at the start of it. I'd like to document it before I wipe it-- and the memory of it-- clean:

I love all of these and I wish I knew you in real life because I would enjoy your company (and probably all your friends' company) so much. I'd just be worried that you would be totally bored by me.

But I have to say, my favorite was Sean's quote about garage refrigerators. He captured that so perfectly.

Wouldn't it be great to meet in person? Sometimes I imagine this and wonder how it would be. Maybe like Julia Child meeting Mavis, her longtime penpal. (In a train station, obv). Worrying about being boring is what's boring, never you. One day, may our paths meet! And you're right, Sean's is so good.