Since moving to the Utah 'burbs, we've experienced a lot of culture shock.  In the beginning, I was bringing my New York self to Utah and those things are...different.  I've had to work hard at reconciling who I am and living here and it's still an ongoing process but one thing that someone said to me early on has stuck with me and it gives me a bit of comfort when I feel like I might explode from trying to jam Square Peg Jen into this round suburban hole. (wish my name was Peg right now. Also, is Peg short for anything? What a weird name) We were moving into our house and a neighbor who has since become a friend I respect and admire said to me,

"You know, the wreaths all the look the same, but the stories inside are very different."  Or something like that. I laughed at the wreath comment because I was like, man it's true, what is UP with the wreaths and the sameness around here.    Also--year 'round wreaths. Not just at Christmas? This was new to me.

For some reason, I struggle with wreaths. It's a dumb struggle and can barely even be called that, but I think I've used it as a symbol of some kind that I'm not sure I fully understand. A symbol of assimilation? A symbol of superficiality and caring what neighbors think? Two things I abhor. I try extra hard not to care about things I don't want to care about but feel culturally compelled to care about since living here for some-odd years. So I resist the wreath, at least at non-Christmastimes.  Right now on our door we have 3 snowflakes that light up. Somehow, snowflakes hanging are totally different from a wreath.

One day I was out for a walk and in a park near my house, there are pine trees with the tiniest, most adorable, perfect pinecones.  I took one one day and on another day, brought the coat with the deep pockets and stuffed them full as fast as I could. I'm a bit of a thief out in nature. More specifically, fruit-thieving. If I walk by a raspberry bush that someone planted in their front yard, i kind of feel like it's an invitation. And I've been known to take some grapes off an over-the-fence vine (I left a thank you note though. Left = flung over the fence). I think in the UK they call this scrumping, but that might specifically apply to apples, which I have also thieved.  In Sweden the word is palla, as a verb, but I don't know if there's a noun.  Anyway, the pinecones: I didn't even know what I was going to do with them, I just wanted them, so I took them. They were too cute.  They have since remained in a bowl as some kind of sad decor as we have yet to figure something out. But I just can't let them go. Here they are: 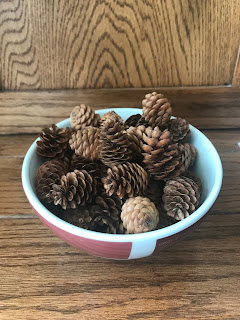 In other news, I am slowly weaning myself off of Facebook. It's going well but I'll check in once a week or so. Sometimes I am rewarded, especially after I started following a group called Middle Earth or something. And they have excellent LOTR memes and whatnot.  One day someone posted a wreath and I loved it. I closed the browser (I only look at FB on my laptop. One of my rules) and then later Sean walked in and I told him,

"Sean, I think i found the wreath I would have, were I to have a wreath."

And I went back and tried to find it via Google, who was showing me a lot of things but not what I was looking for.

"Shoot," I said. "I'll have to find it later. But hey look, here's something we can make with our pinecones."

And I clicked on an image of a wreath made out of just pinecones. Until I looked a bit closer and was like, "wait..what the hey?" 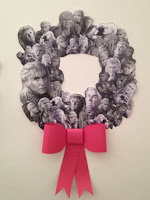 Let's zoom in a bit more. 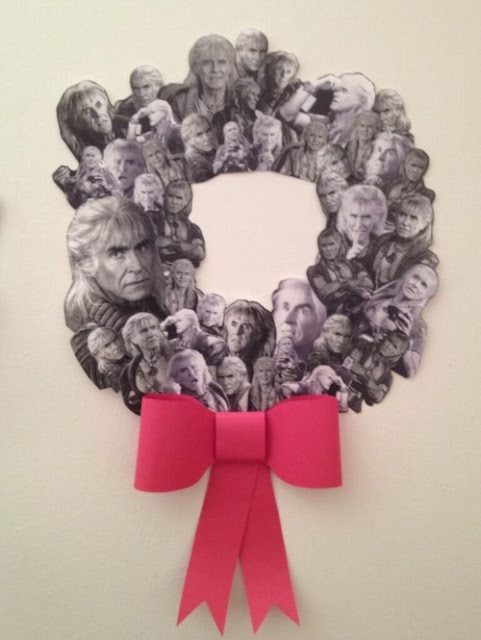 We laughed and then later I found the wreath I had seen initially: 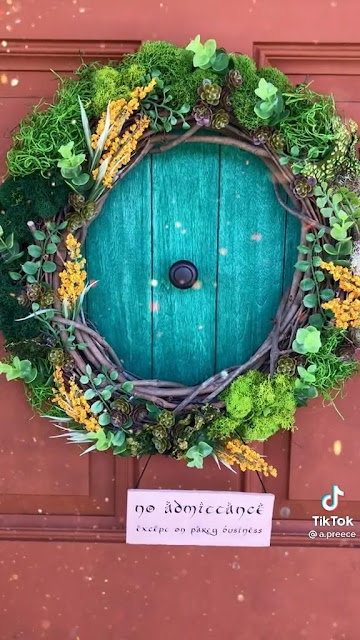 Wreath + door on a door, with party reference which = holiday-y? and hobbit curmudgeonliness which = me? A+
So, looks like I found two wreaths I would concede to have.

But if anyone has any ideas about those pinecones, let me know.
Posted by )en at 11:33 AM

I got no clue about the pinecones, as I am the least crafty person in the world (I often feel like I should get kicked out of Relief Society for my non-craftiness). But I agree they are adorable and I don't blame you for stealing them!

Peg is short for Margaret, I have no idea why...?

And those wreaths are AWESOME. And I love your neighbor's words of wisdom there-- that is an incredible thing to remember!!!