Yesterday was the 20th anniversary of when Lord of the Rings: (I just typed "ringers"-hahahaha) Fellowship of the Ring(ers) came out.  Twenty years since my heart found its twin flame in Frodo, Gandalf, Aragorn, and Eowyn. And many, many others.

We introduced the movies to Julian at a very young age. We started telling him the bedtime story of "Frodo and the Ring" when he was younger still.  So he has grown up on them.  And we carry on the beloved tradition of watching the extended versions every Christmastime.  We started reading the first book this fall. Julian thought we could have them all read by the time we started watching. Yeah, that didn't happen. They are slower-going. But that's ok. Last year I was at the checkout at Trader Joe's and you know how they always ask you prying questions about your day/life. He must have asked what i was up to this Christmas or something I don't know and I told him of our tradition and he said, "oh awesome! Yeah my Dad does that too."  What the fff... And I just found this meme which... 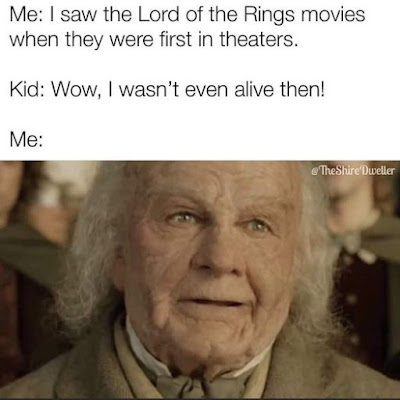 yeah.
We finally made it to the end of our marathon and just happened to finish Return of the King last night and, as usual, I burst into sobs. Long after when someone would perhaps appropriately cry and then move on, I was still going. Had leftover feels. I just couldn't stop.  The credits were rolling and rolling by then and showing like, all the assistant carpenters and "hammerhands."  (love this word) I just decided to let the tears flow. It's a different kind of cry and it happens once a year.

My view has slightly changed as I've gotten older too. For example, I remember crushing hard on Legolas back in the day and while I still have a love, reverence, and admiration of the beauty and mysticism of the elves, my more mature heart swoons for Aragorn.  How could it not? He is steady and loyal to the max the whole way through, even amidst his self-doubt and moments of hopelessness.  He carries on and encourages others and shows them he is a man of the people, a man of the hobbits, a man of whoever does good and is in need of good.  He shows up. I could probably write a separate post about him (and each of the characters and why i love them and their stories) but for now, let us just say, I cried big tears tonight. First when the movie ended and I felt like I'd been on such an epic journey, and second (and for different reasons) when I lost to Sean playing LOTR Trivial Pursuit*.  Happy Anniversary. Where have 20 years gone? Life is a lightning fast mystery. 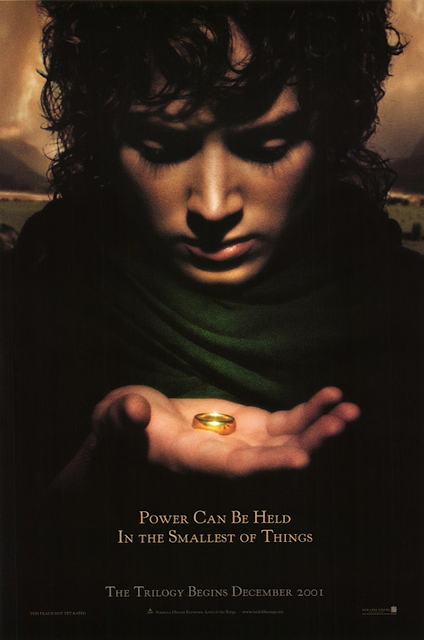 *I am a bitter loser. But I swear he gets questions like, "whose burden was it to carry the ring?" and mine are all, "name every heir in Isildur's lineage down to Aragorn."

I really enjoy these movies and books, although I cannot claim to be a super fan like you. But this is reminding me that we need to be watching these movies with Ryder and Kendra now! (Bentley has seen them once. He's due for a repeat for sure!)

Your examples of the trivia questions killed me!

It has been interesting to see how I feel with every re-watch. As life gets a bit more intense and heavy, I’m like, oh yeah Frodo, I feel you. Or other characters. The symbolism is not so distant.