Mondays are like, such total Mondays, you know?  Julian goes to piano Monday mornings and I drive him and sit in the car and merely exist in the world. Today I existed by doing a crossword puzzle in a book i have. I like to date each puzzle when I finish one and write where I was.  "11/1/21.  In the car."  I need to carry it with me so the locations change. I'd love to see how varied I can get it.

There's something I really love about November. For no real reason. I've just always felt drawn to it.  This fall has been spectacular, one of the prettiest ones I can remember. Last year's was a total dud. All the colors were pale and washed out and everything just quickly died out.  And I took it personally. This year autumn made it up to me and I really appreciate it.  Just outstanding. Right now, the view from my window is pretty great. I have a neighbor diagonally from me who has huge trees in her backyard. I send her seasonal texts of my view with a note of thanks.

Julian's in a fun phase of insulting/criticizing everything on this green earth. If it's alive, he'll find a way, and that includes trees. He and I just finished a debate about fall. A tree in our backyard is changing later than others so it's in full bright transition right now while others are on the outs. He thinks it's lame for trees to be "late fallers" as I dubbed, and he thought all the trees should go at the same time. Which is completely absurd. As is his next comment: 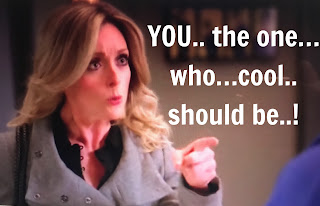 (I had to make this meme because it tragically does not exist on the internet ... until now.)

I came home this morning and asked Alexa to "play songs about November."  She was stumped by that one but later provided me with a playlist when I asked for "falltime songs."  I listened to it and made some brownies. It's been an important task lately to make brownies to freeze and eat later.  There are a lot of fundamentals of life and "emergency brownie" is one of them. I finally found a recipe I like. It's basic, uses cocoa powder (so no cutting up chocolate bars), it uses metric weight measurements which is a million times better/easier,  and the cocoa content is high, very important. Bonus is it requires a lot of hard stirring which buffs me up.

I like recipes that say funny things like, "Stir until mixture is smooth and hot enough that you want to remove your finger fairly quickly after dipping it in to test."  How did they test this? How did they come to this conclusion?   And did I do it? Yes I did, and I was a little scared. Further on it says "Set the bowl aside briefly until the mixture is only warm, not hot."  It's too precise not to matter.  Here's the recipe if you want it. Notes: I double the sea salt and take off 1/4 c. of sugar.

I learned a hopeful trick today. I say hopeful because jury's still out, but I read if you want to keep an avocado half green for longer, submerge it in a bowl of water.  When I was finishing making myself my daily avocado toast, I went to put "avacados" on my TJs list on my phone, except i hit "avocadi" instead and SHAZAM, an amazing new word was born. I was beyond delighted. I feel like I made an important discovery, almost like when you discover a word exists for something you're seeking to name, like neologism. You read it here first from this neologist.

Anyway, I always need tips with avocadi because I eat them regularly but only a half at a time. Sometimes I make Sean one with the other half, but other times, just me. I'm only explaining this because I needed an excuse to use "avocadi" in a sentence. It's making me really happy.

And that's what you're going to get out of me this November 1st.