Here we are into the belly of the heat monster-beast, mid-July.  I wrote a poem about this guy last year. In case you wanted to read it again, let's post it here for you:
Mid-July
You can try but you shan't defy
The blistering heat monster called mid-July
He sharpens his knives in continuous supply
And waits for you with plans to subdue
His kitchen swells until he's satisfied.
Bakes and sets and wins each time.
Nestled in the crockery tin
His stewy breath blown in your eye.
The fiery glint shows his new fry
He'll serve you soup but it's bone dry
Resigned and brined, no you can't deny
The new cook in town with a plan for pie
The new cook in charge, called mid-July
I have a million ideas I've jotted down for potential blog posts.  I don't know which to choose, which particular vibe I'd like to project, or which would turn into something or which would result in probably a lengthy stream of pointless nothingness.  Or--and what I often end up doing-- I wonder, should I serve the need I have within to record everything in a hodgepodge conglomeration and who cares if it's coherent or cohesive? At least it's all out and I don't have to think about it anymore.  A purging of the thoughts, if you will, that probably serves no one but me.
I don't ever know. So, in the meantime, all I do is jot. Jot, jot, jot.  Jot this, scribble that, record this, note that.  Funny quotes caught in a moment, interesting quotes to come across, thoughts of my own, etc. Almost everything on a post-it note.  But also in journals, notebooks, whatever is nearby.  Today I listened to a podcast while driving in the car and kept a spiral notebook on my lap so i could jot down notes at red lights that never lasted long enough. But I did get pretty good at writing almost a whole sentence without looking.   What is it all for, though? What will it end up being?  Why do I do it?  What will come of this? I ask myself this all the time. What? Why? What? And why?
A big part of my process, and by process I mean "life" is to try and make sense of whatever is going on around me.  Day in and day out, I devote myself to it. It's automatic. I can't stop.  I can't escape it. I never take a break.  Maybe it's more prevalent in weightier times such as these, where it greets me at every turn.  And the only thing I know how to do is take it and try to turn it into sense of some kind. So the way I do that is to jot. The first step in discovering meaning in something is to decide it's something "write down-able."  Worth recording.  Taking a second, finding some paper, and throwing it down, all the while recognizing that it probably isn't.  It's maddening.  Why do I do it? I don't know. But I do it still.  And if I don't turn it into something, then I feel like I'm merely taking notes on life, and that feels dumb because what test am I preparing for?   It just feels incomplete and purposeless which can bum me out.

But let's have some examples.
I don't know what this moment captured.  I wrote it on a post-it note weeks ago and i've been looking at it every day and with each passing day, it makes less and less sense.  I've forgotten details along the way, including the initial reason I thought it worth recording in the first place.  But I still look at the note and try to extrapolate whatever I can.  But I believe it to be folly.  Because: 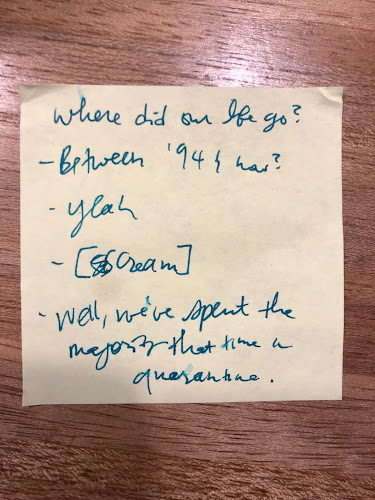 Try as I might, I cannot figure out the significance of this. I think Sean and I were talking about the mid-90's, reminiscing about something, maybe a movie. I don't even know. And then as old people do, we jumped from then until now, unable to account for what happened in-between.
"Where did our life go?"

"Well, we've spent the majority of that in quarantine."

I think I just thought it was a funny quarantine quote because it felt very, very accurate about the new way time passes these days and our comprehension of it.  But then I had inserted a [scream] that I cannot account for at all.  *shrug*  Thus we see: they're not all diamonds. And maybe that's ok.

And then I have this one, which needs no explanation at all, other than it's my favorite way to start a Julian day: 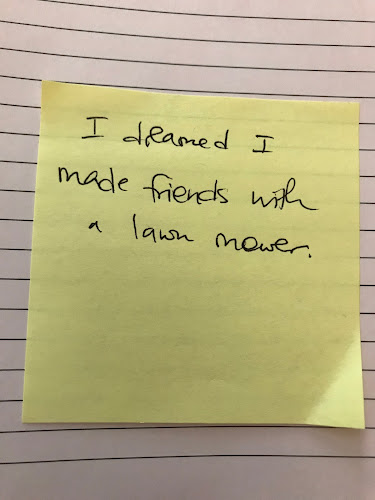 This next one came from a notebook and taps into my frustrations as a writer and speaks very well to the entire theme of this post.  I think about writing all the time but thinking is not the same as doing.  So instead of doing, I just think about it and then write down thoughts about doing it, instead of actually doing it, writing the thing I really want to write about:

The poetry line is a thought I had to make myself feel better about writing poetry.  To create this idea that maybe poets aren't untouchable literary gods, but just people. And then I say to myself, "well, I'm a person too." And then I think about the difference between poets and people.  And that maybe, just maybe I can count myself one of them. At least, one day.

The second thought is a thought I will apparently have 40 years from now because, ?? Can't explain that one. But it was written (or will be written, I guess) out of miserable frustration and a moment of motivational despair.  It is very easy for me not to write.  I can do SO many things that aren't writing, throughout the course of my day.  I could list so many things right now you would be amazed at all the things I can do that are not writing.  And every day they fill up the day and every day I continue to JOT AND SCRIBBLE in the silly hopes and futile plans to one day actually write something into something. But it's sooo easy for me not to.
To close, this exchange I have recorded in my phone. A few days ago I left a comment on someone's Instagram or something and I chuckled to myself at what I considered a witty contribution.  I asked Sean,

"Am I funnier in writing than in person? Be honest."

This is often the kind of set up I present to Sean.  He stood there and thought for a few seconds and then said that I may be funnier in writing, which we agreed was a compliment to my writing and an insult to my face.
_______
Posted by )en at 4:42 PM