Time to talk about cats.  I told some people the other day that I could honestly and sincerely talk about my cats for the longest time. We all laughed and then I continued to do so, to everyone's discomfort (but mine).

When we got our second cat last December i learned a lesson. It was: OH YEAH, I AM ALLERGIC TO CATS.  Just her special recipe of dander, apparently, because the big one never bothered me like this.  I sneeze approximately 1,000 times a day. I am seriously considering tracking how many times because I really want to know. I've gotten really good at it, too. I let each sneeze out like a cannon, loud and hard, fast and free. KA-BOOM.  That's my achoo. And it's funny, every time I do it, it's so hard and feels so complete, I think to myself, there, now. Surely that's the last one. Surely I got it all out. There can be nothing left to sneeze. I will never sneeze again.  But no, I am always wrong.  I always do.  But I do think this every time. Maybe this'll be it... finally...
The little one is all grown up, yet like all babies of the family, she will always be a kitten.  She is also our favorite and we all beg for her love which she doles out sparingly and randomly.  We think she may be on edge a lot due to the Big Fat but she is calming down a little bit more each day. I think. It's hard to tell. I also wonder how much human contact she had before we got her.

The other night Sean and I were watching TV and normally what happens is she will jump on the couch, I think in search of love and affection, not know how to get it, get scared and bolt off the couch and flee.  She'll do this multiple times in an evening.  Well, this night we were sitting there and she jumped up, we reacted very calmly and rationally ("hold absolutely still. her nerves are based on movement") and she actually curled up and laid down next to us! Even touching one of us! It was magical. We felt so lucky, so privileged, so humbled.

We love a lot of things about her.  One of those things is how, amidst her nervousness, she'll sometimes flop right in front of us and roll over, exposing her soft snowy white belly which is the greatest gift of all. We don't know why she flops. Maybe her fear turns into paralysis (omg, I just typed "paralyzation" over and over for FAR too long)  which is sad. Or, I think I've read that some cats are just floppy. I think this might be an attribute of the rag doll cat breed?  Anyway, it cracks me up every time.  Sometimes when she's flopped near the edge of the couch on the floor, we cannot resist and must plunge our hands into her soft belly and she'll just roll underneath out of our reach. Julian calls her a cinnamon roll and I'm like dang, that would have been the perfect name.

Another thing I love about her is how she loves to go outside but won't go far.  Also, if we don't crack open the door a bit, she'll freak out and come back, crying to be let in.  She just needs to know she can come home if she wants to.  Yesterday she was out in the backyard along the fence and I opened the door and called out to her to come in.  She mew'ed back and we talked back and forth like this several times, "Come on! I need to go! Come on in!"  "mew!"  She doesn't use her voice much so when she does, i love it. Anyway, I said, "ok, then, I'll come near you and then you'll have to escape."  So that's what i did. I just walked over to her and she darted back into the house.  It's like she really didn't want to come in but is also a little scared of me which is also sad but it's not from neglect or for lack of effort on my part, I assure you.

But one thing I love most of all is how she loves to hide.  She feels safer, I think, if she can burrow in somewhere.  Often this is under the blanket on the cat chair.  If she can make a tunnel out of something, she will, and she will snooze there and be so happy.  This presents hazards, of course, if we were to want to sit on that chair or our bed. We have to be careful. I've shown this picture before but it's worth another view.  We generally don't let the cats in our room but sometimes I can't help it with the little one. 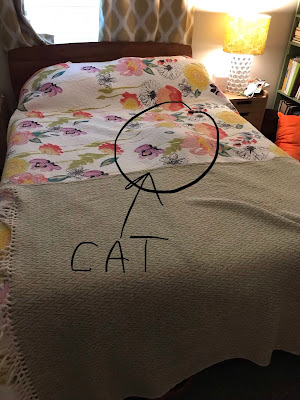 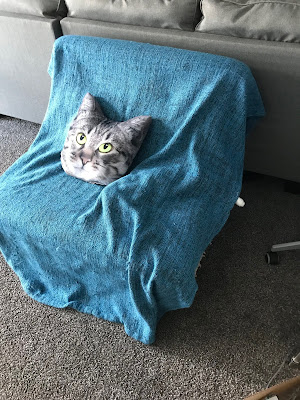 This next picture is just the two cats trying to get at me (or something) in the bathroom. They sometimes fight, they sometimes play and chase, she's kind of obsessed with him, he doesn't usually care until he wants to.  But when they do things like this together, it sort of warms my heart and just makes me laugh. 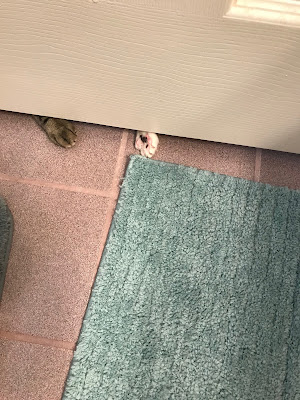 What I love most about her hiding tendencies is how she's often not totally hidden even though she thinks she is and I know that's how she'd wish to be.  She'll run and hide but juuuust barely. She'll tuck herself underneath a dresser or bench and almost always, some little part of her will be sticking out and we'll be like, "ohhh look who's so hidden! Where is that little cat? I just can't see her anywhere."    Examples:

When this happens, it is physically impossible not to boop whatever is poking out, which she hates, but we do it anyway.


But I know she wants to be hidden. Just kills me.  "Good job, you! Found a gooood hiding place. No one will find you there."


Here's one of the big cat so he doesn't feel left out. He loves my bed but I do not allow it. However, the other day I left the door open and he snuck in and seized his moment. When I returned I found this, but what made me laugh was his wide, fearful eyes. He knows he's not allowed on my bed but I could just hear him say, "I want to be here- LET ME STAY HERE. JUST LET ME STAY. SEE, I'M SLEEPING." 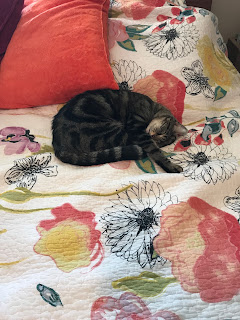 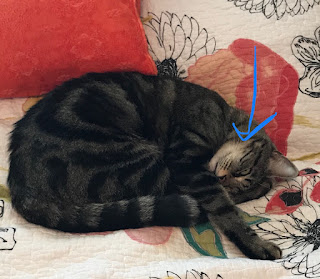 So that's about it about the cats for this week, today, now. Speaking of, I just went downstairs and saw her standing at the open doorway, staring at me like a statue.  I think she wants to go out but feels anxious and needs a friend, so I will go get my book and appease her wishes.
Posted by )en at 12:08 PM

I can't believe you missed "purralysis."

What-- I can't believe I did either. Also: PODCAT! Yes, yes, a thousand times yes.