The highlights of this year's Easter include:

- a couple of egg hunts.
- praying really hard for spring.
- pulling out all our million kits and having an egg dying blitz.
- going to church and not hearing one talk on Easter and also a really bizarre musical number which I will describe further.
- discussing at length the difference between hope and faith and coming up with many possible conclusions but no one definitive answer.
- having a chocolate tasting with friends who appreciate the finer things.
- having Easter dinner a la Sean with these same friends and a glorious time with them.


So it was announced that the choir would sing O Savior Thou Who Wearest a Crown and I was like, oh great! pulling out the big guns. < -- sounds sarcastic but is not. What I consider to be the official anthem of Easter, this is not for the faint of heart. Sean and I had our own special experience with this, if you'll recall.   But then what the choir actually sang was the words to the song to the music of If You Could Hie to Kolob, an interesting hymn in the book, yet resulting in a completely different song. I leaned over to Sean and said, "like... i like kolob, it's a nice song, but are we not going to get to hear the other music at all??"  I felt a little cheated.  Sean didn't quite get what I was saying, perhaps because he didn't hear me. Then a few minutes later he independently leaned over to me and said, "Kolob is a good song. A solid 8.8/10. But what you've done is replaced a 10/10 song and that is just wrong."  It made me laugh and we were both kind of like, why? Just... why? :(

So because I felt like it was inaccurately titled, I came up with a list of my own titles which I feel are a better representation of this completely unnecessary abomination mashup:

And let us all remember, just because you can doesn't mean you should. Anyway, we came home and put on the real song and played it on repeat at least a dozen times.

Here are a few pictures to represent the Easter season 2019:

First, Julian at the piano. There isn't anything particularly Eastery about this other than he's doing AMAZINGLY these days, working vigorously at his recital songs with nary a complaint, and if that isn't a miracle, then maybe I don't believe in miracles.

It took me a minute to remember the details of this next picture but I was sure glad when i did.  Sean had been dapperly mashing the potatoes when something went awry and he had a potatotastrophe...potato-splosion... potato bomb explode in his face. You can see bits of potato here and there. Julian and I took great joy in this.

Our kitten is so weird. Also, she will always be a kitten.

I organized a little neighborhood egg hunt like that from my youth and some neighbors really pulled out all the stops. I don't remember what this style of decorating is called but I'm a big, big fan: 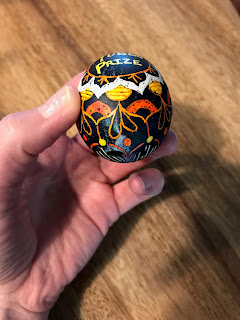 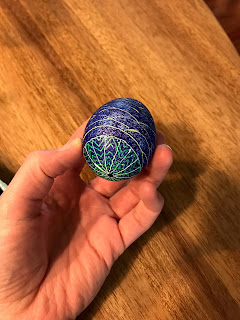 Here are my best eggs from our dying blitz. Not as impressive as above but I was pleased. Especially with this first one that I initially dotted with a sponge in purple dye and it looked really bad and gross, but I dropped it in a cup of dye and saved it in the end: 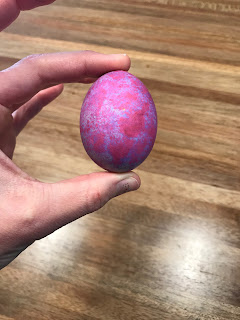 Easter time is a time for chemistry and eggsperiments. I used to make these doodles all the time in Jr. High/High School. I'm glad I could resurrect them: 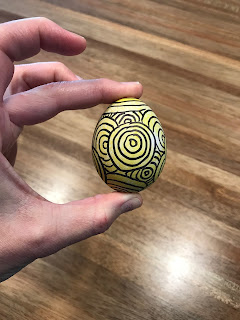 We had some friends over to dye eggs as well as a neighbor kid who came to play with Julian. It always amuses me when the friend comes over when we're doing something Julian isn't interested in but the friend totally is. It gives me a good kid replacement, doing crafts and whatnot with someone who will.  I try not to accidentally call the kid "Julian."


I went to an art market and saw these interesting things. One is an artwork by a man who pressed and framed real, dried vegetables. He had peas, mushrooms, carrots, etc.  Here are some carrots. He was super pleased with himself as I would be were I to show my artwork at an art market: 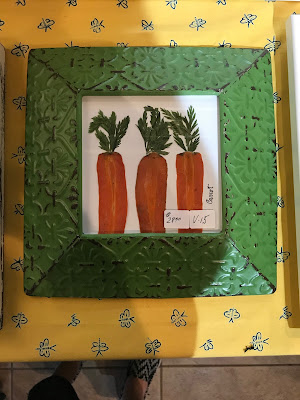 I love eggs so I was naturally drawn to this but I couldn't get past the fact that whoever cracked these eggs dropped the shells in with their yolks and just left them there. I mean... what: 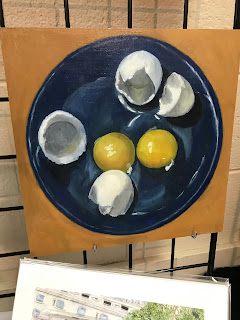 Annual egg hunt at my parents'.  Here is just a handful of grandkids. Julian was super stressed because my sister always hides a golden egg and the finder gets a prize.  We told him to pretend the golden egg didn't exist and he said if he did find it he'd let someone else have it, two things that did NOT occur:  He found the egg and could not give it up in the end. Here they are: 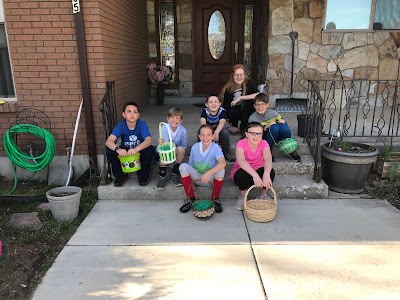 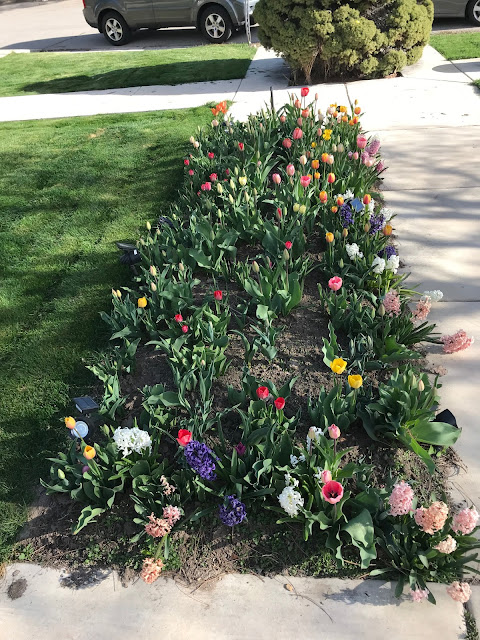 Getting a clue to find the well-hidden golden egg: 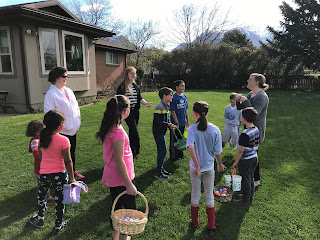 Easter dinner plating. Sean's menu:  lamb chops, ham, twice baked potatoes (one with shredded cheddar, one with goat cheese), carrot ribbons, asparagus, and fruit salad I don't have a picture of but he cut watermelons and pineapples into cubes the size of blueberries, so everything would match. 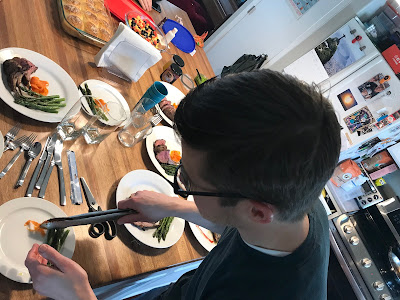 Lastly, I snapped some pics of Julian in a completely empty church parking lot. This kid is just too cute.


To close, I found a new poem to add to my collection. I spotted a blip of it on a greeting card I bought and looked up the complete version. It's by Emily Dickinson and I liked it, especially since hope was a major theme of our Easter this year.  To celebrate Easter and mine and Emily's recent reconciliation, here it is:


Love your Easter Blog!! Thanks for making my post-Easter evening perfect. Such a great family - you, Sean and Julian. And of course your birth family too. Have a great rest of April. Love, Reta

Love this, and you, Reta!