Every Valentine's, I like to have sort of a theme. I learn a new way to make a valentine and just stick to that for the most part. Starting about three weeks prior, I get out ALL my v-day crap (and so, so much crap there is) and spread it all over the table. I am tempted to clean it up several times but there is a phenomenon that occurs that prevents me and that phenomenon is called Julian Might Get Crafty. Like David Attenborough watching animals in the most remote corners of the wild, I must wait, patiently, sometimes for days and days on end through rain and snow to see if this miracle of nature might occur.  I can't linger or hang about. I hide behind my pretense of not watching (but I am, like a hawk incognito) and sometimes, if I'm lucky, the beast emerges. He gives a sniff, sauntering about here and there.  And then, as I cling to the edge, my breath frozen in my lungs, IT HAPPENS! He sits down, takes up a card. Cuts a heart. He might un-rubberband a marker or two. There goes the glue!  It's all so ridiculously exciting and i feel like my whole life has been leading up to this. It's a marvel to witness, a solemn event.  Absolutely thrilling.

This year I went with sewing hearts with string and also puppy crafts.  I took zero pictures of these but here's a picture I got off the internets and we made a few of these puppies (ha). 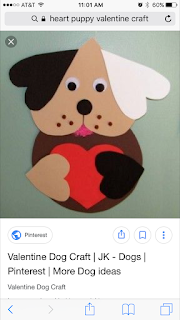 Also I went a little extra and used foldover heart cards for the heart the puppy is holding(!) This won Julian over immediately and inspired him to even made a puppy of his own.

The sewn hearts were fun and just the kind of sewing I am capable of doing.  On paper? Not something to be worn? Yes. Here's an example: 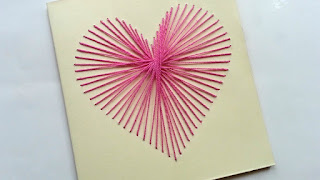 I also used the thinnest, most delicate gold thread which made for some pretty freakin' fancy spun hearts. {smug face}

Here are some valentines Julian spontaneously made for us one day.  They are the cutest.

This one is for me: 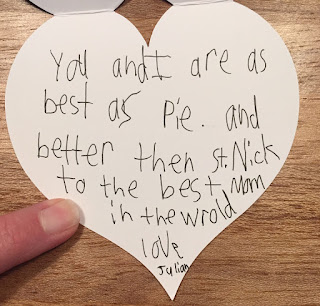 Then he asked Sean what his favorite animal was and Sean said, "today, it's a raccoon."
I get really excited for Julian to do valentines for his classmates. Was that not the greatest day in elementary school? He hasn't yet been required to make his own box but I'm thinking up all sorts of ideas.  I love the homemade valentines as well but prefer to let him choose his own way of doing it. If he wanted to make them, that's cool, but he likes to choose his own at the store and then do the systematic work like filling out the cards, sticking hearts and subliminal messages onto the ones he chooses, taping on the candy. They are ready weeks in advance. He had to specially request the class list from his teacher, ha ha.
I think my favorite way to celebrate the day is to have a romantic family dinner. I love to exchange valentines, have some flowers (some beauties Sean picked up and again, no pictures). Sean and I order an assortment of chocolates from the fanciest chocolatier we know and we deliver valentines to our neighbors. I think next year I might put a valentines box out on the porch and just let everyone know it's there, just FYI.  Also Sean made us chocolate souffles which were AMAZING. To put it eloquently: Holy. crap. 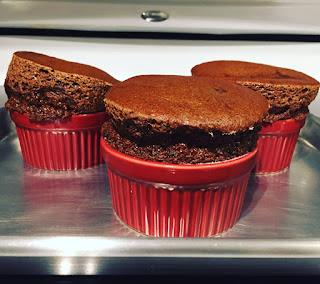 I dream about these. So light and fluffy!  I put this up on instagram and tagged Paul Hollywood to check out that rise and noted that there were zero white specks. They were so, so good. Sigh. I weep a little.

Also, my valentines for Sean and Julian. First, Julian's:


For Sean, this one I worked on for a while. I was at the store one day and browsing action figures, apparently (? I have no idea why i was there, but i was) and I saw one of General Leia which, for some reason, made me laugh. It's not that I think it's funny to imagine playing with her, or that I imagine an old person playing with an old person action figure, or maybe it is.  Maybe it is that i do. Maybe this is ageist of me. Well, I stood in front of it for several seconds, pondering and concocting. I even walked away and then doubled back for it maybe twice. But something told me not to pass this up. It was too good. With the help of a friend who knows her way around a craft store, I gathered supplies and made this 3-dimensional valentine for Sean: 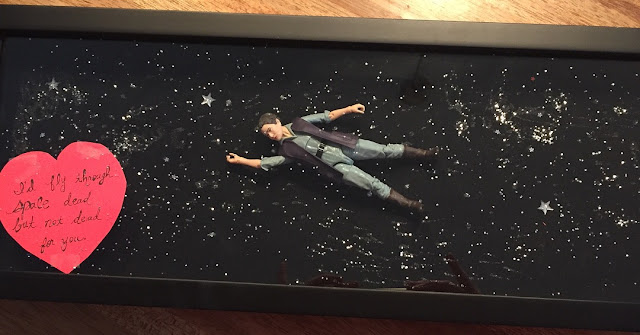 Hahahahaha!  Sooo funny to me.  My friend, who hadn't seen the movie so it was extra weird to explain the project to her, asked me what he'd think and I said, "honestly, I don't know. He'll love it. But will he laugh? Maybe. I really can't say."  Sean loves Star Wars. Like, spends many minutes watching youtube videos about it. But he had a lot of problems with the latest movie and hated this scene.  If you haven't seen it, spoiler alert, maybe? (I'm not sure. Could be more like a warning.)

Sean did like it and laughed a little. Mostly I think he was in a little bit of shock. Like, what the fudge is this thing? It wasn't until a day or two later that he was able to gather his thoughts, and gave me the greatest compliment of my life:

Oh- I think we had been discussing showing gratitude more instead of being spoiled snotfaces (naming no names) and were making a goal to do this. Sean was sitting there, extra quiet and contemplative, and said,

"I am thankful for that flying Leia. It brings my whole life into focus.  Only one person would give a gift like that.  You. It is...so bizarre. So bizarre and thoughtful, and that is you.  It will get a place of honor for sure."

p.s. Sean got cards for me and Julian with very sweet, heartfelt messages written on them but some things are just too sacred, even for )en's Log.
And that wraps up our V-day. So great.  As a bonus and long'ish post script, a few random pictures from my phone.  First, our kitty cat trying to contort himself into a heart. Seriously though, what are you doing, Kitty? How is this comfortable. I am disturbed. 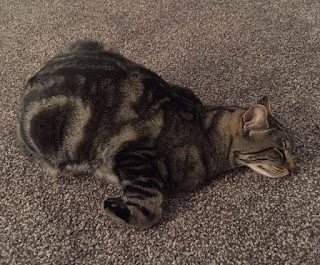 Second, some boots i ordered on some sketchy chinese website.  How much in love am I??? Bright red, fur-lined. No words anywhere. I love these boots so much, I had retroactive concern for their travels all the way from China.  "Oh! I'm so glad you're safe."

Sunrises here can be outrageously spectacular but I can never get a good pic because all the dumb houses get in the way. Still, on this morning Julian and I were dying on the way to school. I did my best to capture and I could have sworn I heard horns and hooves as I looked to the east at first light on the fifth day. (does anyone get this reference? anyone?) 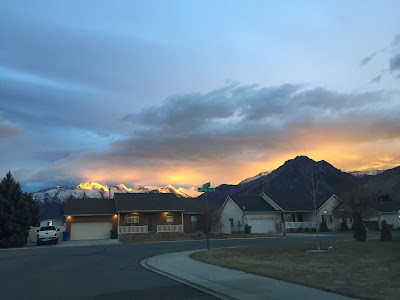 Also, a cute picture of Julian being cute in the greatest sweater I've ever seen that i force him to wear because I become almost enraged with jealousy. Instead of "if i can't have it, nobody can," it's, "If i can't have it, YOU MUST HAVE IT. YOU WILL HAVE IT." 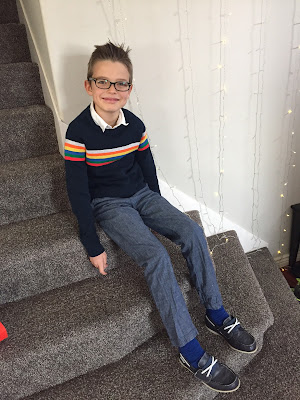 Lastly, a picture of me, that I took just now. 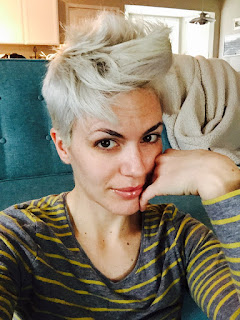 What if I signed all of my blog posts? Kind of like when my mom first started texting:  "Love, Mom."  {heart}

Flying Leia is the best thing ever. Sometimes the thing you can’t stand to watch is the thing to immortalize as a diorama. It just is