I had my birthday this week. The build-up was just as it is every year: as it approached, the excitement grew. Hints, subtle and not so subtle were dropped by you-know-who and I felt the thrill of the upcoming best day of the year. It has been this way since I was a child.  How did I spend that glorious 0427?

I woke up to the morning of my birthday. You know that moment, the feeling you have (or had when you were 7) when you realized it was your birthday, how this day was set apart from every other day of the year? I got up, dressed myself, and made my bed all whilst hearing a storm a-brewing outside my door. Julian was all but banging down my door, a commendable feat considering him and who he is as a person (that is, a person who barges into my room a hundred times a day) and considering the ruckus i heard. Huffing and puffing and pacing, just waiting for me to open my door before bursting altogether. It made me laugh and I smiled as I calmly did my tasks and then I opened the door.

I tell you, birthdays are nothing anymore without Julian.  It is amazing.  I am not sure of the phenomenon here. It's like I have someone to share the excitement with, someone who loves them just as much as I do. And it's a bit cathartic because it takes away all the birthday pressure (for me and, no doubt, Sean) so that I know, no matter what happens, it's going to be a great day. Because my birthday is basically his birthday and I die a thousand times to see him show so much love and excitement for me. He repeated many statements throughout the day that it didn't matter what he got, it was my day. He wanted my day to be special. He hoped so badly that it would be and, i mean, can you honestly imagine a gift better than that??

Here he is in my room before school, p.s. having put on his shoes and grabbed his coat without being asked. {cry} 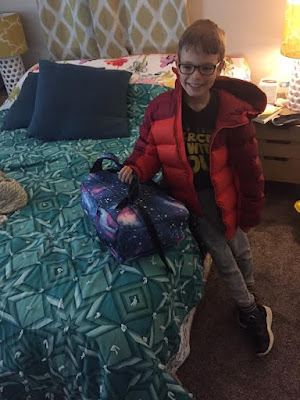 He had me cover my eyes and walk downstairs (dangerous, don't do it) and presented me with the best birthday sign ever to behold: 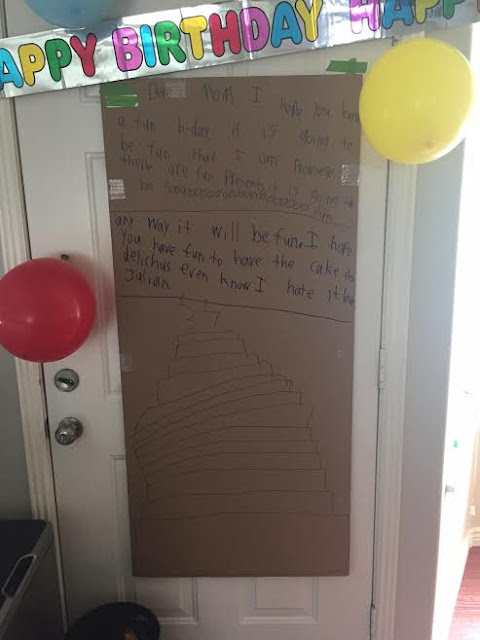 It's... AMAZING.   It was one of those moments--the whole day, in fact-- where you learn that your kid might not be a sociopath after all.  You know those special tender moments.  I'm kidding, but he was so friggin' thoughtful toward me all day. Kid loves me hard and I happily embraced it, all day long. That note is the ultimate because Sean had apparently ordered me a chocolate cake from the fanciest chocolatiere we know, LA Burdick- yessssss.

Julian, however, hates chocolate cake. He doesn't even really like chocolate except for gross chocolate candies which is not really chocolate so that makes sense.  Anyway, he and Sean debated over it for a long time and Sean put his foot down, Julian conceded, and got his own special cupcake but gave the greatest gift of all with his note telling me it would be delicious---FOR ME.  {heart break, cry face}

This cake, by the way, has made me real happy. I tell you, quality stuff is worth hunting for in this life and I won't ever give up.  I told Sean eating this cake gives me actual chocolate endorphins, like I actually feel happier when I eat it and not at all sick. It's basically a dense, possibly flourless concoction with raspberry puree and raspberry ganache which-- who knew such a thing existed.  It is perfection. We've been trying to figure out who to invite over to help us eat it but the nights are busy and it may end up being just a two-person project. 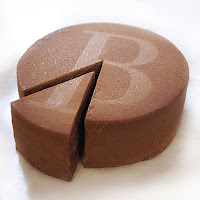 The day was filled with relaxation and several drop-bys by thoughtful birthday people. So basically I sat on my can while I received gifts. Just the best. Such kindness. I have now made a goal to make as many bday drop-bys as I can.

One favorite gift was this gem: 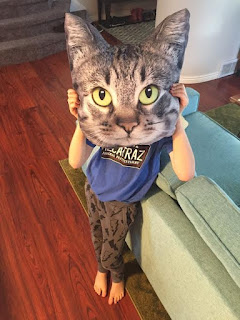 So good. I yelled when i flipped it over, then went up to scare Sean with it.  It scares us every time we descend the stairs. Scares the cat too. We're all scared. I love it.

Sean and I have some friends we met in Bklyn who live here now. Dom's birthday is a day after mine; we were born a day apart. I always feel a little connection to people who would have been in my grade. Kids of 1980, unite!  Off and on for many years we have celebrated together, the four of us, and it is a beloved tradition. This time we went to see Colossal, an outstanding indie film I highly recommend. There's some language but I hardly remember hearing it and it was just so good. It's wacky, includes some sci-fi (yay) and delivers a powerful message of strength, fighting back, standing up for one's self and taking responsibility, taking charge of one's own life. I loved it. We all did. And as I recently suggested to Sean that, as a means to help us feel those city-like feelings of diversity,  better connected with the outside world, we might consider watching more indie films. So this fit the bill and hit the spot. Excellent.  Followed by Thai food and lots of scattered conversation. Best.

Also I went to dinner and a movie with some OTHER friends.  The movie I wanted to see? And they good naturedly went along with? Kong: Skull Island. It was first introduced as a joke or like, feigning a lack of preference, " ha ha Kong would be awesome! But you know, whatever. I'm good with anything!"  But the seed of desire was planted. And we're all so glad it worked out that way because it was pretty awesome. Scary, gruesome, a little bit awful, but good fluffy entertainment. If you like to be scared with a little bit of grossness and also enlarged animals, go see it today.

Lastly, I finally did it, you guys.  I bleached my hair.  I believe I'm on phase one of two to go even lighter. I've been wanting to do this FOR-EV-ER and last year i came this close but was scared off by the upkeep. But this year i said, don't care. It is time.  So I did it and i love it and satisfies the pressing feeling i've been having deep inside that anything different is good.  {sparkle emoji} 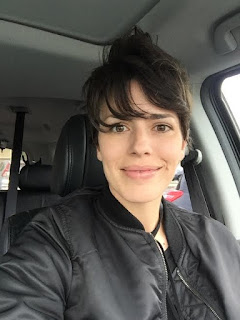 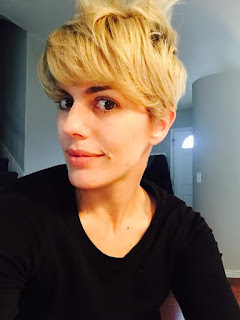 I might write a more philosophical, reflective post on getting older on this great journey we call life, but now, I just wanted to share that birthday magic is apparently real at any age, and it's alive and well with this one.

You really do birthdays right. Paul and I went to see COlossal with Cole and Suzie. Paul and Suzie liked it up until the monster appeared and then made fun of it, while Cole and I were both in love with it. Which actually, is how most things go.

HA! that does sound about right. I frigging loved it. Pshhh Monster is the BEST! Awwwww. I'm jealous about this but will just convince myself I was there. I was.