If You're Going to San Francisco

*Thanks, Scott McKenzie, for an outstanding song.

When I was a youth, I was in the school choir. This was the kind of choir that basically admitted all seniors and some juniors if you were really good. It was sort of the cool thing to do, i suppose, and I had a lot of fun, trying to sing well but not once practicing. Joking around with my nearby fellow singers.  For our choir tour where we competed, our destination was San Fran.  We drove all night on a bus and had a rip roaring fantastic time.  It was also one of the first times I fell in city love.

What did I love so much about it? It's hard to say. It wasn't any single thing, I suppose, but the feeling and the energy I found myself exposed to and ultimately infected by. I looove a town with a personality. And it was beautiful and exciting. And so, so hilly. And charming with the trolleys and the stunning bay and, as they always are, the awe-inspiring city bridges, stretching like mammoths linking other mysterious lands green and sparkling.

While there on the choir tour, I debated with some trolley drivers about cities vs. the country. Though I was loving my time there, I felt loyal to my roots and defended the need for living space vs. what the city had to offer. Yards vs. parks. I did not know then that I would have a serious change of heart in about 5 years to come.

Whilst living in Bklyn and loving the heck out of it, whenever we'd try to consider another place we could see ourselves living (when anything other than NY really felt intolerable), I conceded to say that I could live in San Francisco. I'd always wanted to go back and revisit that first love and last week we did, and we took the boy with us.

Here's a quote of his I took off the wiki page:

"I went to the Seattle Art Museum with my mother for the first time when I was 14. I saw this Jackson Pollock drip painting with aluminum paint, tar, gravel and all that stuff. I was absolutely outraged, disturbed. It was so far removed from what I thought art was. However, within 2 or 3 days, I was dripping paint all over my old paintings. In a way I've been chasing that experience ever since."


I love that. The rage! Of being exposed to something that comes from such an opposite realm you live in, to ignite such strong emotion and then to be fundamentally changed by it.  I watched Julian have his own mini-outrage in this museum visit:  "I could make that! It would take me ten seconds, no problem!"

Other highlights and hopefully in a more condensed format: 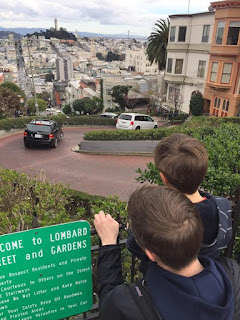 We ordered seamless to our hotel for dinner every night because we COULD. 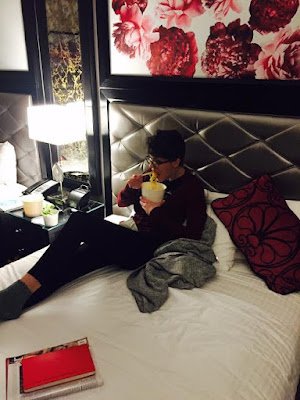 When we got home I had (have) severe post-vacation depression so to ease my pain Sean and I watched Vertigo last night. I never really saw Vertigo much in my Hitchcock adventures; I don't know why. But I thought it was super weird. Kind of interesting, at the end, I guess.  Who am i rooting for, exactly? Who's the villain? Is it the vertigo? Maybe these are all important questions. Though it may not be my favorite of Alfred's, the SF shots were glorious and it did help a bit.  Now onto making our list of good things about being back...  hmm....{thinking with a pen poised}