The other morning it was frigid outside.  It was the kind of day that looked quite deceptively warm all day long. Sean, who lives in a cave, kept questioning me: "But it looks so nice!"   "NO, Sean. Don't be fooled, it is nasty out there. Don't try it. You'll be sorry!"  Constant wind with such a bad bite, not even the desert sun could penetrate it.  I was not amused by it.

That morning began like any other morning.  For example, upon immediately waking up, I probably put on pajamas part II, also known as "pajamas for the public" or "presentable pajamas."  It's lounge wear I put on after I wake up but before I get truly dressed for the day.  I've never enjoyed lingering about in my pajamas for very long. So since I can't get up and immediately get ready,  this is a compromise.  Julian probably woke up on his own. The cat was no doubt outside my door with his trademark morning meow/yowl that is this close to sounding like a human "hello?"  We surely had breakfast that morning and it was likely to be pancakes, the mix of which i make ahead of time in a ziplock bag because it's my favorite recipe that has a beautiful combo of cinnamon AND cornmeal in it and takes too long to make on our rushed mornings. And then, when it was time to depart to school, I surveyed the boy and saw all kinds of beloved things:

1. His grown up, dimply face
2. His cute gap toothiness
3. His glasses with the strap
4. His cool jacket I'm super jealous of
5. His light-up tennies
6. His general color scheme and blockedness.
7. His space backpack.  Julian never cares much about these things but he tells me he often gets compliments on the backpack from other kids, and I'm just so pleased he has a mom as cool as he does.

I had to take a picture so I commanded him to stand in the frozen morning air by the pinwheels to let me. Ever the cutie, he nailed it on the first try: 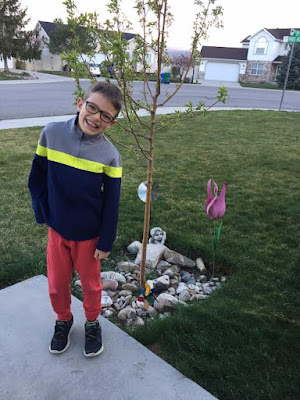 But then I noticed something strange. Obviously I knew it was there but to catch it looking at you is always as startling as ever.  Zoom in, why don't you: 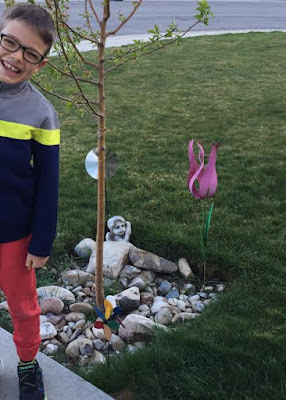 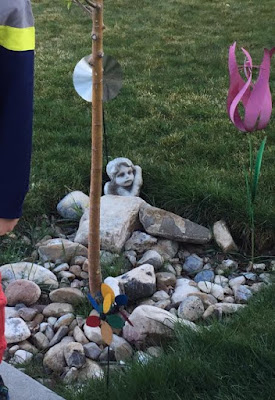 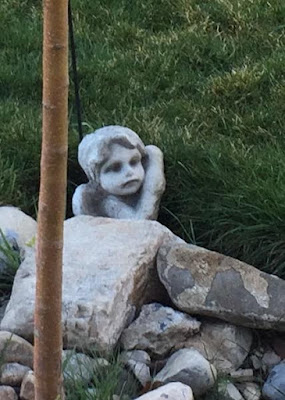 AAH! This gem is a faux stone angel child someone gave me and Sean for our wedding 13.5 years ago. WEDDING.  Like, as a wedding present. ??? The obvious question is: who hates us so much? My parents have been storing random nicknacks i never took with me to NY when setting sail those many years ago and upon moving here, they were all too excited to give me every last box of my junk, one of which included this thing. It's creepy, it's somehow even creepier to think that someone would want to give it to us. Like, why? Who? What were the circumstances? I have half a mind to think there's something dangerous hidden inside to be retrieved when it's safe, or some kind of spy gear or something. Joke's on them, it's been in a box for over a decade.

But now that we've found it a home, I've grown rather attached, and like to prop it up as you see here.  Sometimes, somehow, it's angled to be appearing to look right at us, no matter where we are, often through the window into our home. Thanks, creepy angel. And thanks creepy wedding friend who gifted it to us. It really does make me want to dig through my junk at home and take it to weddings.  Mazel tov!

It's late and I'm too tired to be witty, but I just have to point out that posts like this are why I love your blog. Also, I want a picture of that backpack, too.

Haha! Thx, buddy, that means a lot.
And I'll never know! Unless the gifter reads my blog?? In my dreams..