I spend a disproportionate amount of my life thinking about breakfast.  This is the one meal of the day I care about and actually have some skill in.  (I use that term loosely. By "skill" i mean "ounce of clue.")

As a subset of breakfast which I'd actually prefer to call "hero," I'd like to talk about eggs today. I've got a lot to say about eggs but specifically I'd like to tackle the elusive nigh unto impossible task of making a soft boiled egg.  Hard boiled eggs are great. In fact, I purchase them by the bag because I'm too lazy to boil my own. Plus I need those un-boiled eggs for other things. But a quick boiled egg is the best way to grab some protein as a quick snack or toss on a salad, for example. Since the bagged eggs come de-shelled and are a bit dicey in their lifespan (or "eggspiration" date-- {cry/laugh face})  what I do is grab a paper towel as a receiving mitt and then shimmy one or two eggs up the bag so as to have 0% contact with my human and therefore contaminant-hands.  Then I salt them and enjoy and they are the best.

Anyone can hard boil an egg. Just put it in boiling water and forget about it. But the soft boiled version is much more precarious and I have yet to accomplish it. But I love it. So sometimes you get out the eggs, set to experiment, and risk wasting a good many of them.  Since I know my recipes are quite popular, I thought I'd share with you my experiences from the other morning.

The day dawn was breaking and sunlight poured into my kitchen. It was the end of the week and I had entered full "don't want to do anything today" mode, save for accomplishing a really good egg. I had been trying sporadically in days previous so this time I made a few adjustments.  Here's how it went down, as written in present tense as a sort of mish-mash of a scientific study and a kitchen recipe. I think Julia Child would be proud of me (at first I typed Julian Child--OMG, I think I just discovered his Halloween costume[!!])

1. Take out a carton of eggs. Understand that you may use anywhere between 2-12, depending on your egg desperation and success.

2. Start with two. Two is a good number. Enough to satisfy and use for experimental purposes (call them Subject A and B if you'd like).   Use a mid-sized pan because you want to have enough water to cover the eggs.

3. Fill up the pan. Eyeball it.  Toss in some salt and turn up the heat to high so that it gets it to a rapid boil.

4. Use some tongs and carefully place eggs in the pot.*

5. Abiding by a certain recipe found somewhere but half remembered, remove the pot from the heat and cover with a lid. Let it sit for 5 minutes because it told you that would give you a medium-level amount of doneness. Your goal is a semi-runny yolk but a pretty done white part.

6. Take out one egg. While holding it, tap a knife around the top to take off and examine. See that the entire thing is 1% cooked and therefore inedible. Toss down the drain. Leave shell in the sink too. Curse a little.

7. Let the other egg sit for a minute longer and take it out. Find exact same results even though that dumb recipe told you otherwise. Pretend it's a little more done. Eat a bit, gag a bit, then toss it as well.

8.  Disappointed but determined, start again. This time with four eggs because you need more subjects and also you are hungry.

9. This time, leave eggs to boil on active burner for like a minute or something because you have forgotten to set a timer.  You are a good scientist.  Then take it off the heat to leave to cook under a lid as done previously.

10. After 4 minutes, take out one egg (Subject A). See that it's still way too runny. Toss. Curse a little more. Do this with Subject B as well.  Examine Subject C after another minute and fool yourself into thinking it's a bit more edible.  Question how exactly a soft boiled egg is supposed to be. Discuss with a family member/fellow scientist. Question your definition of a soft boiled egg. Wonder about how others eat them and what's an acceptable/un-hazardous to your health form for them to be eaten or not.

11. Wait a minute or so longer and pull out Subject D, your last egg and hope.  Say a little prayer. Tap a knife around the top to get the lid off and also burn your fingers a little because these eggs are scald-degrees but you have negative amounts of patience (scientist). You must know. If you are taking photos at this point, do an impossible feat of photo-taking where, both hands being busy, you may need to take picture with some part of your face. 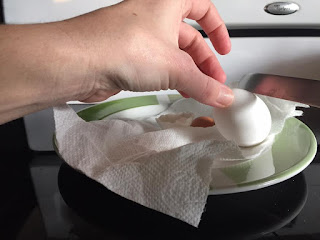 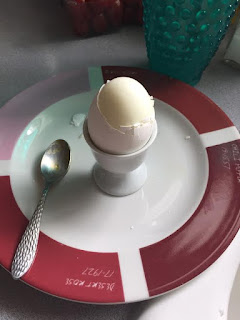 13. Notice that the egg white is solid. Say another prayer.  Dig in a little. Remember: Your goal is a semi-cooked yolk. Become distracted by the surprisingly beautiful photo you've taken here. Good ol' morning sun. 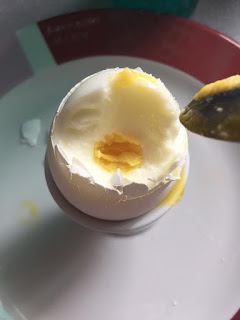 14.  As you dig in further, see that the yolk is completely cooked. Examine further but knowing full well you have failed. Again. 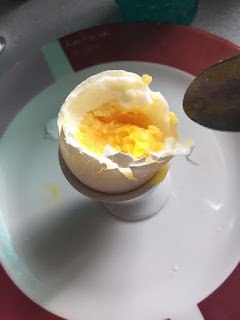 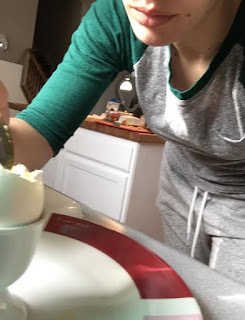 16. Be dejected next to a sink full of useless egg goo and shells. 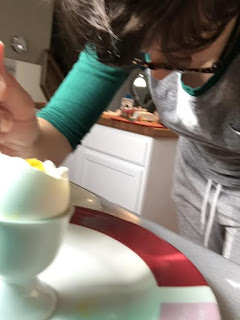 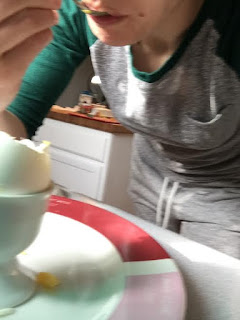 18. Shake your fist and shout to the heavens, "soft boillllled!!"

*I think I figured it out. There are so many variations to making this egg but I think I forgot I had let the egg sit in the water before bringing to a boil. This makes it so you really have to keep an eagle eye on that water but it may make all the difference.  Stay tuned for part II...
Posted by )en at 4:48 PM

The struggle is real.

Or, buy an instapot and make them that way:
http://instantpot.com/steamed-soft-boiled-eggs/