Cookies 'n Meat.  This could probably another term for Christmas.  Noel. Yule.  Cookies 'n Meat.  I'm just kiddin', I'm pretty tired and totally failed to post something for today.  Why? Because I was participating in Sisters Christmas Cookie Fest 2016 all the live long day.  We gathered and made THIS platter of cookies:

I made the oatmeal gumdrop, lemon drop, pecan butter, and almond butter pretzel thing. Stretched it out all week long. And Sean didn't help ONE BIT.  This isn't a complaint, it's a brag. A brag.  I know. I've grown so much. We made those lemon drop cookies a couple of weeks ago and Sean did the icing and lemon rind and of course it was so much prettier than mine. I snapped a pic: 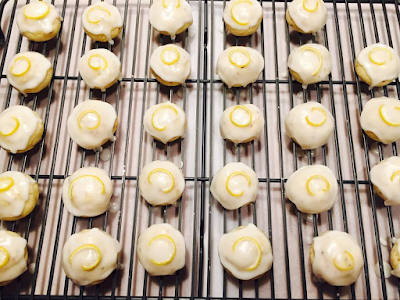 Ahhh! They're so pretty. So tiny and lemony with perfectly curled peels. Beautiful.

Anyway, any cookie at this point makes me want to barf. Doesn't mean I won't eat it though.  All of them were delicious but I think Steph's rugelach are my favorite. I'm a sucker for jammy cookies.

Other important picture of late:

Julian being the Grinch. This mask and a green tee were the extent of his "Whobilation" costume party.

One of my favorite things to do is play games by the Christmas tree. This week it has been pure madness and we've had nary a night to spend together, so we finally made it happen last night. And speaking of the Grinchian, here he is last night trying his hardest to cry after he came in 3rd place in Chutes and Ladders.  Ha ha ha. Come on, Julian! You can do it! 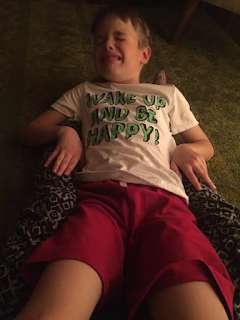 I feel a little bad exploiting him like this. But he deserves it because that "cry" was really something else.

I went to a fancy dinner with some gal pals the other night. It was delish and so fun. Nothing I love better than to eat at a nice restaurant and then stay and talk forever. Long, drawn-out dinner. Yaaay. The charcuterie came with some thinly slice meat, a pot of honey, some mustard, crusty bread, some cheese and small pot of olives. Since the others hated olives I took them all for myself and they were varied and delicious.  They had provided a small bowl for the pits which I took advantage of. It wasn't until after some time that I realized how amazingly festive they can be! I mean, look at that rainbow! Weirdly, friends were not impressed. But look! 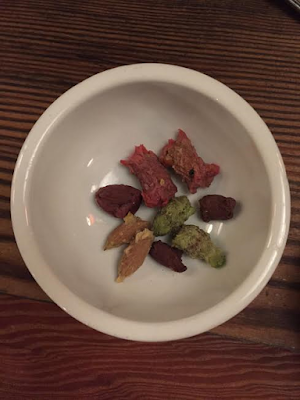 Ha ha. You're welcome for that. The one time a food pic would be acceptable.

On Thursday I stepped outside of my house and was smacked in the face with the sky on fire. I actually saw its reflection on the mountains out a window facing east and said to myself, "something strange is afoot..."   Lo and behold: 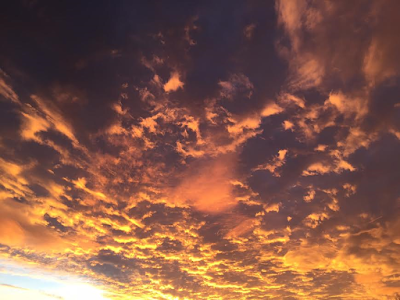 Whaaaaat. No filter on that, friends.  So shockingly beautiful. A bunch of moms were parked outside my house and as they pulled up I wildly gesticulated the majesty of the sky to them. I hope some of them caught a glimpse.

Lastly, tonight a delivery truck stopped by my parents' house where they unloaded the cut up and packaged carcass of 3 pigs, a cow, and some additional beef. It was an INSANE amount of meat. INSANE! It's like it rained beef and pork and my parents sorted it into boxes and packages for their kids as they do every year. This is an overwhelming gift and watching them sort was quite a sight. Also, my mom is the best: