I have mentioned before that I really like birds. Who doesn't like birds? If you really don't like birds, then I will conjecture to say that you are just jealous of them. They can fly and you can't. Also they sing and are really pretty. Dang, birds are kind of jerks, aren't they. Think they're sooo special.

Just kidding though, I really do like birds. I used to sit by the window in my Brooklyn ground floor apartment whose backyard was some kind of strange bird oasis, an urban aviary. We saw blue jays and cardinals and I experienced first hand the kind of maniacal magic of the mockingbird (feels weird not to say mockingjay).  I used to sit out with binoculars and actually bird watch.  Remember that class in college when I was the smart kid?  Appreciation of Nature.  Part of why I loved it was it was taught as if we were meant to enjoy the thing we were to learn. I know, whaa? It's a crazy concept, but it worked. Our teacher brought in live animals like giant stork-like birds, a boa constrictor, and possibly others.  We talked about what was interesting about them and what we could learn. It was here, for example, that I had my first "frogs are the vilest, most disgusting organisms on earth" lesson when we learned about marsupial frogs (-- suckers. I challenge you to click on that link and NOT throw up. They lay eggs and carry them on their backs! *muffled puke sound*). Our teacher also had us write in our nature journals (YES) what our least favorite organism was, then we were assigned to write a paper on something interesting about it.

During the bird section of class, we were to go out and identify some insane amount of birds.  To help us along, our teacher would take us out in a big van to some town 20 minutes south of campus where he knew some birds could be found (this sounds like the sketchiest field trip ever).  But we did find a barn owl and it was awesome.


As anyone, I have a lot to say about owls. I will spare you most of it but here's a bit more. Remember that owl that we saw at the Dry Farm, welcoming us in the old rickety barn like an eerie statuesque guardian of the farm? Well here's that picture again, because it was CRAZY. 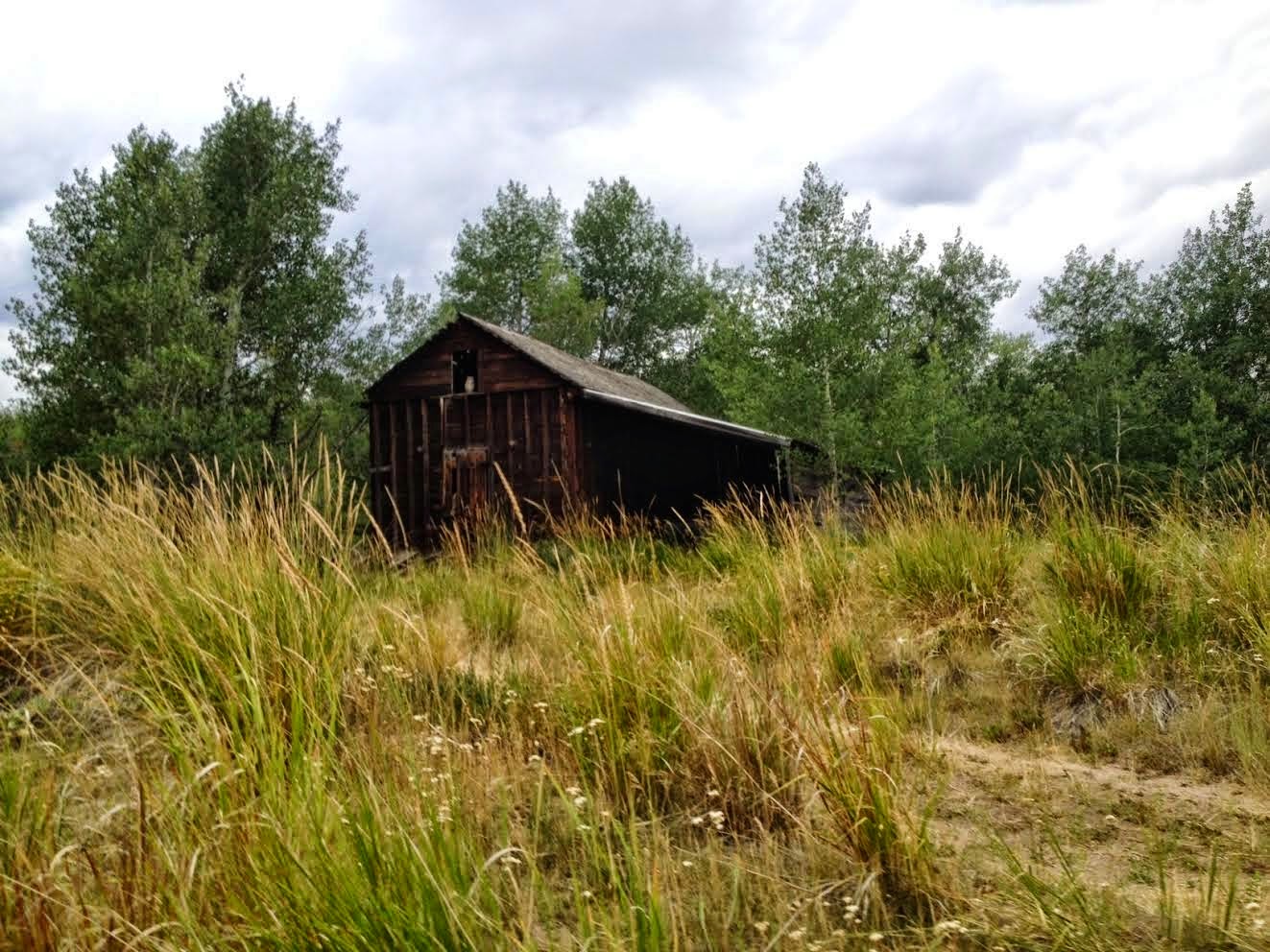 Aaaaah. Why are owls so eerie? mystical, even. like i'm scared of it, but also revere it. When we moved into this little cottage in the woods, one night I heard this little hooting sound.  All was quiet. I was certain it was Julian, who used to make hooting noises when he was an infant and for some reason i regress him to that state whenever he's sleeping. I made Sean go check on him and after he came back to tell me Julian was completely out, we realized it was an actual owl we both just sat there, trying to take in the fact that we went from living in a place where we heard cars, sirens, and people's intimate conversations on a nightly basis to a place where owls actually hoot outside your window.  I reeled, a bit.

One more thought on owls before i move on to the next bird (yup).  I recently visited a friend who had her Christmas tree up. Now, all trees are great. Who am i to judge a tree? Well if i were, I would judge her the WINNER, not only for her tiny chandeliers that made my brain explode but her snowy hedwig owls scattered all around.  AMAZING. Here it is in its full owlery splendor: 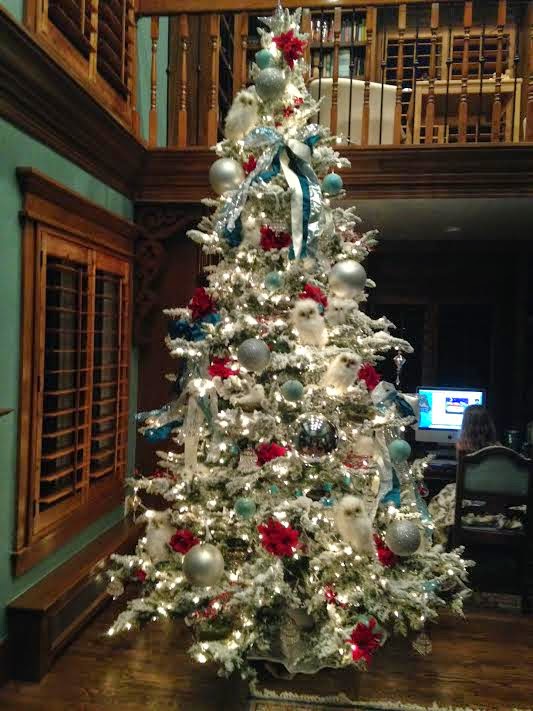 Since we live in the woods we have a lot of birds here.  The other day i was walking back after taking Julian to the bus stop and in the quiet misty morning I heard a strange rattly sound. I knew the sound, it was one of nature's rattles or shakers, (like an instrument. also could be used for babies i guess) which are these seed pods: 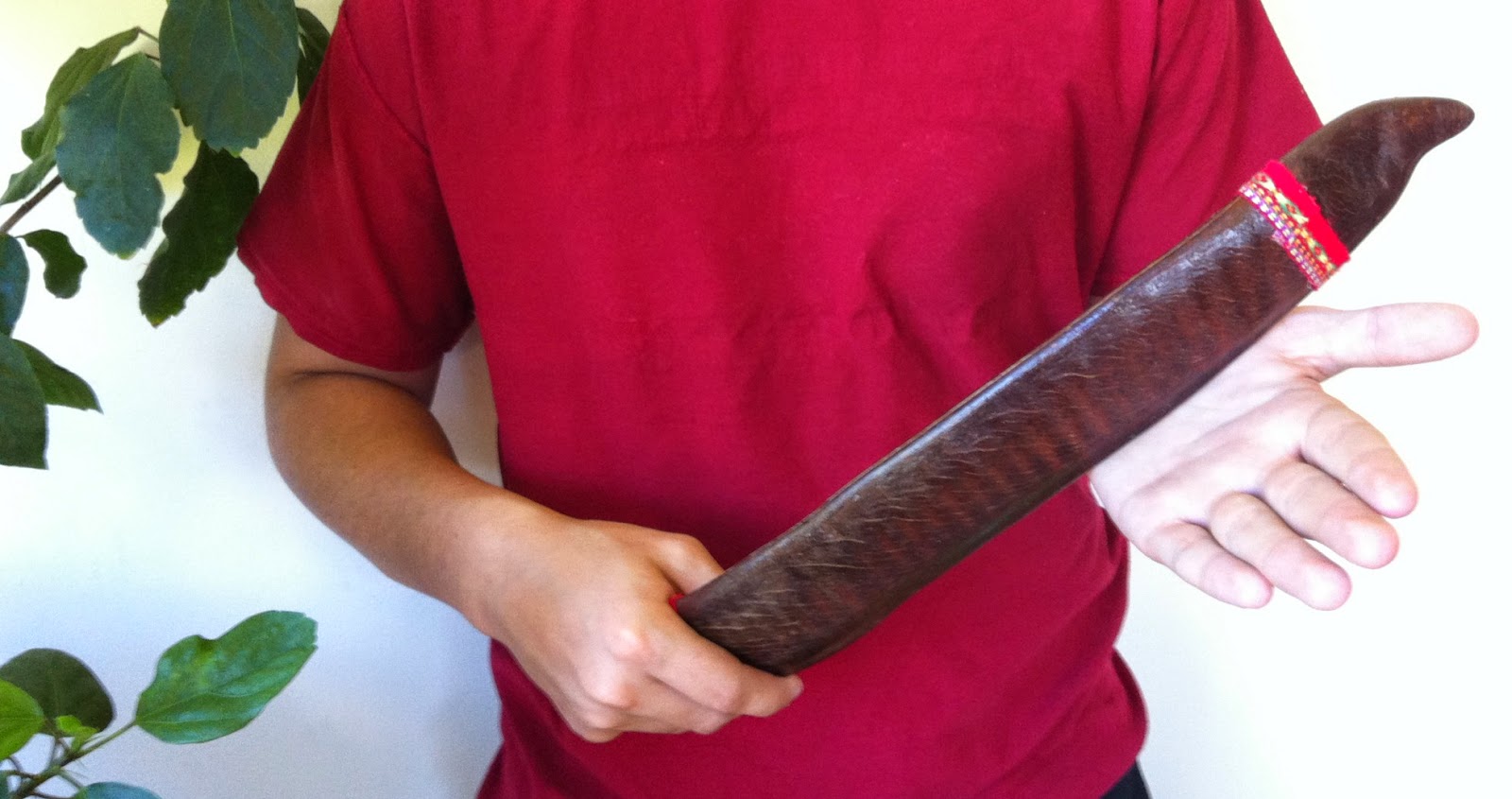 The question wasn't what, but who? Or what?  Wait.   Anyway, i looked up in the seedpod treetops and saw a bird pecking at it in such a silly way, I wondered if he was just having a good time. Was he trying to get at the seeds to eat? Or was he like, hee hee hee this makes a funny noise! Also, I'm pretty sure he was perched on the seedpod he was pecking which probably isn't the best idea but who can say.  All was silent except for this rattle rattle rattle! I laughed and declared it the best thing about my day.  I took a pic and realized the thing was completely camouflaged so I told myself it was in the middle of the pic. Now, looking at it, I'm not sure. But its estimated location is indicated in the diagram below:

On another walk back from the bus, I encountered an entirely different species of bird. We've deduced it's maybe a chickadee or a finch, but they live in the dreary brown bush down the lane and they're tiny, bright yellow and flit about, and it's just the happiest contrast ever. Watching them will cheer you up for sure. 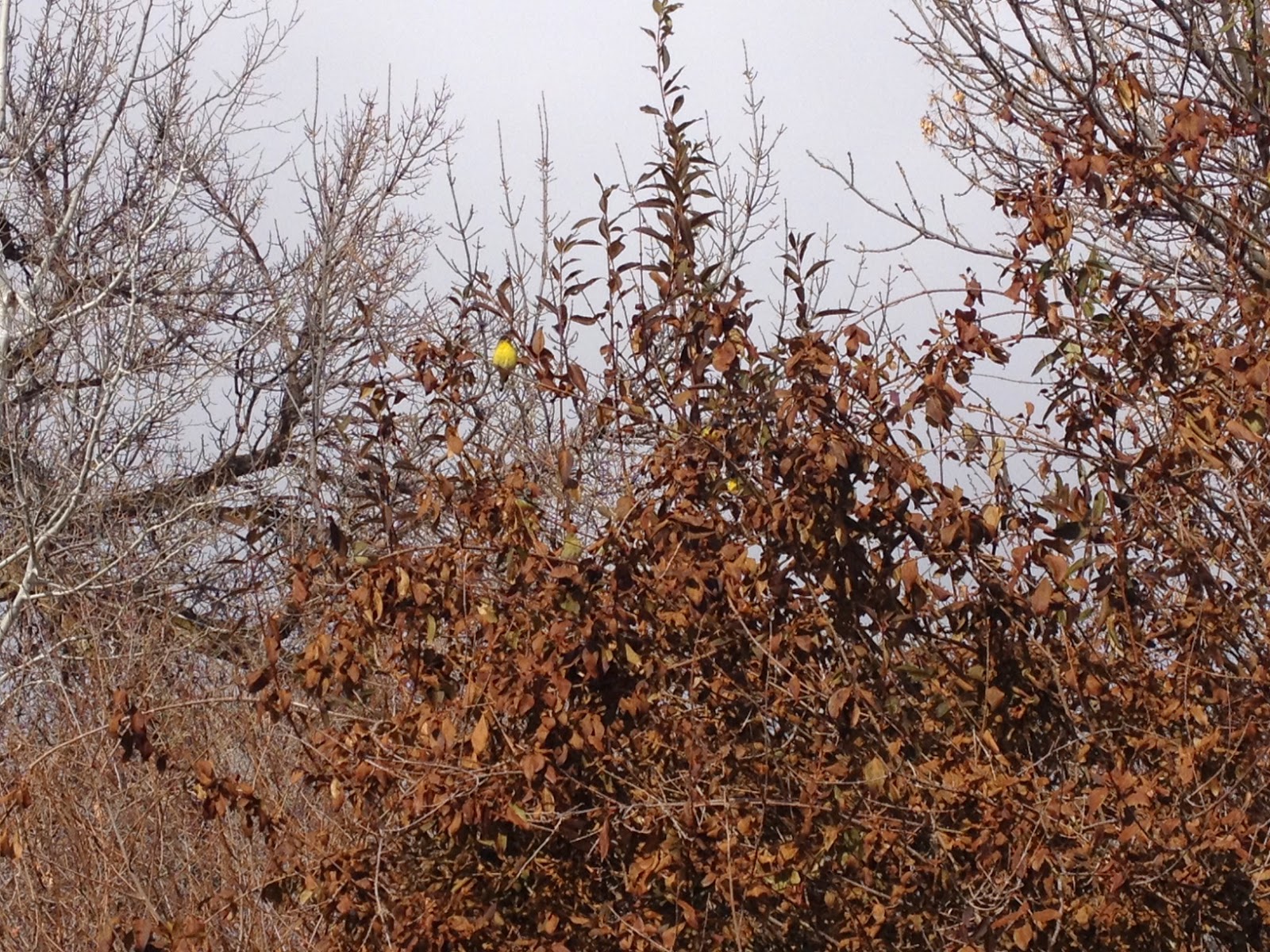 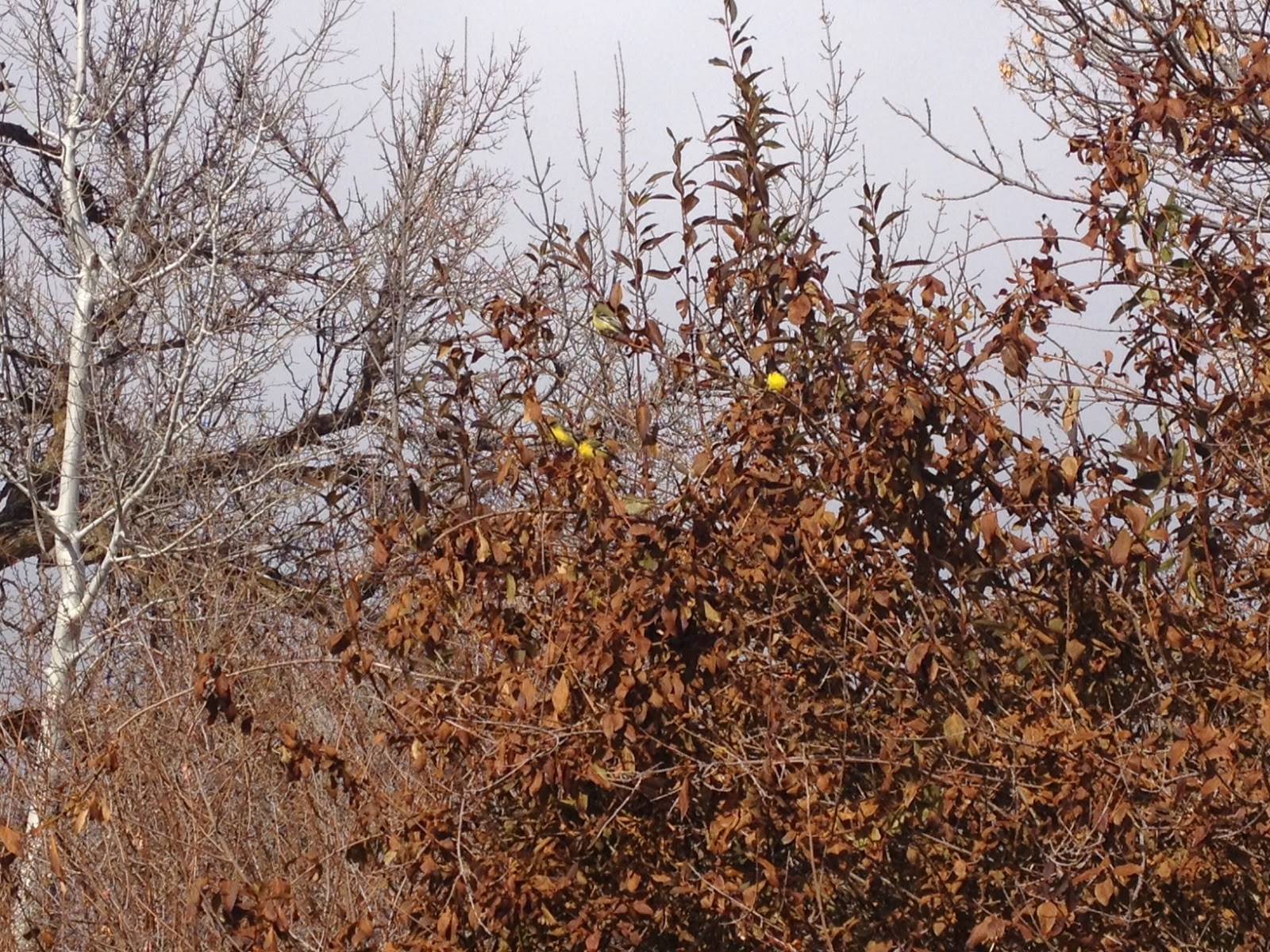 To end this bird tale, this little house is nestled right up against a hill with trees on it so when you look out the back window, you're looking right at a hillside. We remarked that it feels so weird, like you're peeking into a diorama or something.  So we bought a bird to gaze upon on our "nature scene" and I think it does just fine there. 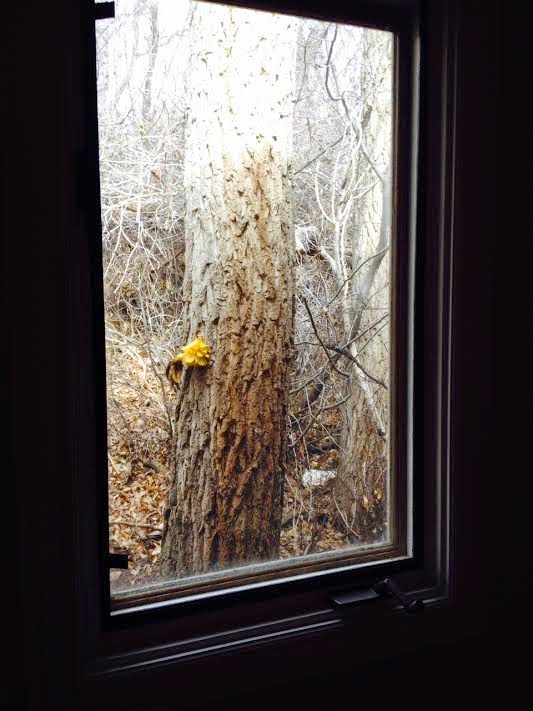 Here it is with the fairy house in the back. Sean had plans to make some kind of hobbit hole but seemed satisfied with that when Julian and I presented it. 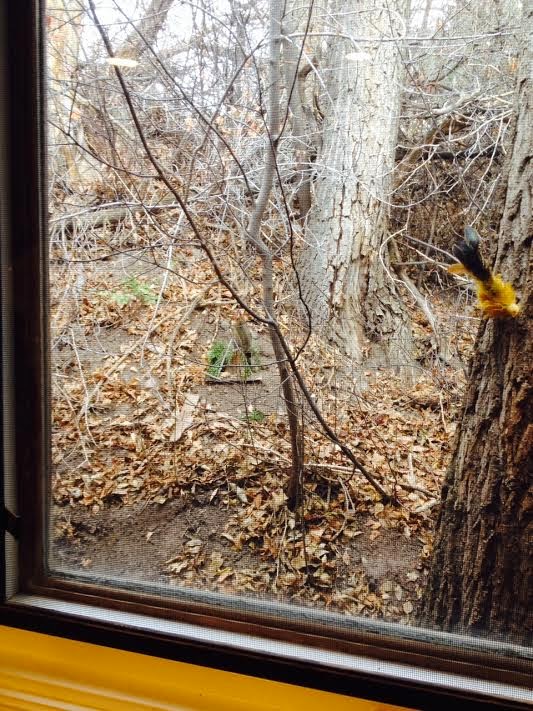 I heard a screech owl on a camping trip once. The weird thing was that it was making a huge racket, but I honestly hadn't even noticed the noise or given it any thought until the lady we were camping with (who teaches middle school science and is quite the nature buff) pointed it out. And then I was all like, "How was I not freaking out from that noise?!?"

Anyway, birds rock. We'll occasionally get a flock of yellow finches flying through the neighborhood and it always takes my breath away. They're just so bright and beautiful! Apparently they're native to Virginia-- I would have guessed they came from somewhere tropical or something.

I know nothing about nature at all, apparently.

I LOVED Appreciation of Nature when I was in college. I remember looking for birds every time I walked outside. It kind of changed me forever because all these years later, I still do.