Julian's five today.  I love this squirt so much. Yesterday we went scooterin' around the neighborhood on my mom's razor and stopped by a friend's house. She told me she could see both Sean and me in him. While I wanted him to look like me, he probably looks more like Sean. But I secretly like to think we have more similarities in personality which I probably not so secretly love and prefer. Not that Sean has a crap personality or anything. But you know.  It's like when my sister was having a friend over for a game the other night. Julian asked if he had any kids, meaning, to bring over..(i'm assuming)  and she told him he had a daughter but she was old. And when Julian replied, "BOOORRRIIIING!"  my immediate reaction was a surge of pride swelling in the very heart of me.  I would never think to teach him something so silly like that. Why would I? But to hear it come from him, it's just what i would say, and I'm just so pleased.

Let's hear it for him, for all the things he says, for the wonder that kids are, and for this kid, my son, my sometimes little brother, my progeny, my best pal forever and infinity.

Spinning around on the office chair:


"I'm ready to spin again because i'm done with my dizz now."

"Mom, what's in the middle of a tornado? is it a big noodle?"  ha ha ha.  This is probably from some show but I'll pretend it's from his wacky and creative brain.

"Mom, let's think about winter and how BAD it was."


--child after my own heart. Don't have to ask me twice!  In my defense, what brought it on was me saying something like, "oh man, remember how it's still dark at dinnertime in the winter? So glad it's light out right now. Isn't that great??"  Appreciating the positive.  But YEAH-- let's DO think about that. It was the WORRRRRRST!!

A prayer:  "Dear Heavenly Father, thank you for our incinerators..."

In the spring we went into the city for a grand adventure. First stop was the Trinity Church in the Financial District. This is the southern tip of Manhattan. Then we got some tacos and walked (and walked and walked) over to the Hudson and walked along that pier for a million blocks. We got lost a lot but that always makes for a great time. When we were sitting in the Trinity cemetery we were enjoying the new flowers and warmth. A dialogue:

JEN: Aww, look at that poor hyacinth, bent to the ground.
JULIAN: Oh Mom, don't tell me that, it's gonna make me cry!

Julian is a sensitive boy. I love this and it makes me laugh all the live long day. Mostly what i love is how he cries at certain songs. He cannot hear them. He refuses to listen. I sometimes tease him and sing half of a line and he starts getting a quivery lip which is suuuper sad and hilarious at the same time. I have touched on this briefly in Titania. I've tried to make a mental list of songs that he refuses to listen to because they're too sad for him but i've probably forgotten some.

1. My Heart Will Go On, from Titanic.
2. You Are My Sunshine
3. Our nighttime song we made up together about when the sun says goodnight, all the stars shine so bright. It's AWESOME, and special, and lovely, and he won't let me sing it unless i jazz it up.
4. Aww dang, i can't remember of any others but i know there are a bunch. Stay tuned for an update...

I just remembered something else though.  One time I had this weird necklace in my drawer and it was bright gold and Julian liked it a lot. Seeming to already know the answer, he sadly asked me if it was going to stay shiny forever and I told him, "well.. it will probably fade over time..." and then I lit up as I remembered-- "...and, you know, nothing gold can stay."   This depressed him mightily but it wasn't until I then got out the poem and read it to him that he began to really weep.

Here it is for you, just because:


Nature's first green is gold,
Her hardest hue to hold.


Her early leaf's a flower


But only so an hour.
Then leaf subsides to leaf.
So Eden sank to grief,

So dawn goes down to day.
Nothing gold can stay.

"Mom, do you know that I sometimes talk to my bank like it's a computer? I say, 'computer. give me some money' and it does and it does all the work."   :D


"Mom, why do I see dentists EVERYWHERE?"


??? Does he already have dentiphobia??

This next one busts me up every. time.


"Aww, I don't know how to snap! Dad doesn't know either. I'm going to be just like DAD!" *crying fearfully*

Julian and I took the Star Trek kite and went kitin' at the park on an overcast day. It was glorious.  It was also half windy so it took real work and luck to keep that kite in the sky. It was so satisfying when we did it and it made me love kite-flying even more.   And you twist and jump and flail like a goon, for love of the kite. "Come on, kite-y.. you can do it.. just believe!"

After a while Julian spotted a mud puddle over yonder and I told him to go investigate.  Here's the conversation that followed:

JULIAN (holding out an invisible weapon): Here's a thing to kill robbers if they come.

JEN:  Ok. Instead of killing them, could I just maim them?

JULIAN: Sure. Here's a name tag for you to write on so people can know their names.

hahahahaha.  Just made me laaaugh and laugh.  In his defense, maim??  Why should he know that word. But oh man, it is funny. Just picturing doing that and the absurdity.  So ridiculous.  "Ok, robbers. Here you go. You're Steven, you're Richard, you're Barbara..."   ha ha ha.  And how he quickly accepted that as a suitable alternative-- "Sure."  ha ha,  :D  Sooo funny.


Julian was on the pot. I don't care if this is TMI, it's too good not to share. TOO GOOD.  He was on the pot and doing his business and i swear to you, in mid bearing down he grunted, "Mommy.. could you come here and show me a picture of Yo-Yo Ma?"    HAHAHA.  What the hey??  I mean... what?  Granted we had been listening to him moments before but STILL.  I mean.. whatever helps you along? I don't know. Some people like to read in the bathroom.  He just needs a little Yo-Yo Ma...
Happy 5th, you strange beautiful creature you. 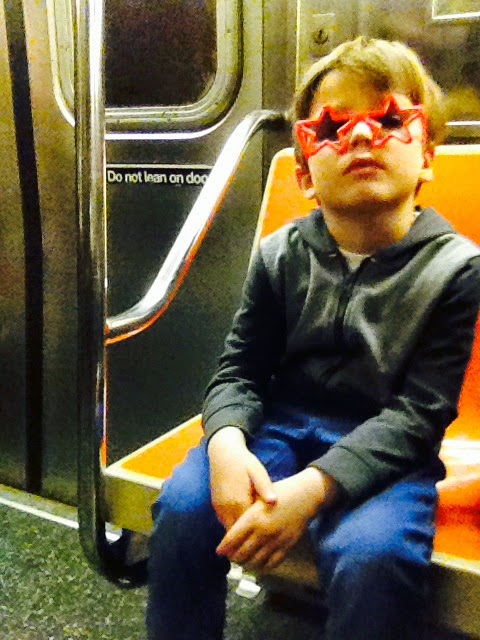 This tribute is fantastic. You are lucky to have a little boy just like you. Also I happen to know that Juliams dad is fantastic at snapping his fingers. Fantastic!

Julian sounds like so much fun. And he's a dapper little guy, too. I hope you'll come over to introduce him to my little girl one of these days. I'm just sayin', it's never too early.

Anytime! It's time we are friends IRL.

He first requested listening to "Puff the Magic Dragon" the other day and then made me turn it off because it was too sad. I love his little tender heart. Most kids wouldn't even pay attention to the melody, let alone the words and meaning, but this kid gets it all. He is one of the cutest boys around. I think we'll have to keep him forever.

Puff! Haha. A tearjerker for sure.

I thought of another song I'm forbidden to sing: On Top of Spaghetti.

That poor little meatball's demise just about does him in.