When J-squirt was a tiny newborn nugget I went to visit my family in Utah. He was about two months old and I remember my mom taking him and treating him like... a person.  And I was like, mom, what are you doing? He's just a robot baby.  Actually the term I often used, repeatedly, was "zombie baby."  That newborn babies are zombies.  Isn't that nice? C'mon, they kind of are. A little out of it, unable to focus. Sloppy control over their bodies. Except I don't think they want to eat my brains.

Anyway, she took him and talked to him and reacted to things he did as if he did them somewhat deliberately, as if he was aware of anything going on around him, as if he didn't actually have a zombie brain.   It wasn't until these days looking back that I realize that he was, actually, a person all along.  And I see things in him now that I saw then, I just didn't know they were really a part of him. I thought they were all arbitrary weird baby things and it would take lots and lots of time before he finally turned into a person.  Which is why I l-o-v-e the book Amelia Bedelia and the Baby.  First of all, AB is hilarious. Secondly, she speaks my language. I kind of consider us soul sisters. In this story, Amelia Bedelia is asked to babysit and as usual, Mrs. Rogers whores her out for whatever her friends need. "Need a teacher? Sure, AB can do it. Need a babysitter? Sure, AB can do it."    I apologize for the vulgarity but I can't find a better term and it's also pretty funny AND true.

The very first lines of the book:


She then spends the day taking care of a toddler and confusing and misunderstanding instructions this way and that (while making delicious strawberry tarts along the way).  And, like I said, it's hilarious. Here's a page that busts me up every time: 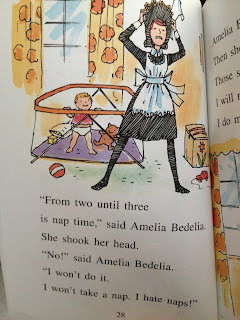 She makes the baby "baby food"--teeny tiny hamburgers, tiny potatoes, baby tomatoes.  She reads "put on a bib" and she puts it on herself and admires how cute it looks. She puts a sweater on the baby, puts her in the stroller, and then takes her out for a while-- as in, takes her back out of the stroller while getting annoyed at the baby's mother for giving such lame instructions.  In the end, her own quirks and ways of doing things endear the baby to her and when the mom returns and is about to get mad at Amelia Bedelia for doing something she thought she was doing wrong she a) eats a strawberry tart (her favorite) and all is forgiven, and b) goes to comfort a fussy baby who wants Amelia Bedelia instead.  AB ends up having a great though exhausting day, having learned a lot of new things, and the last lines read:

Amelia Bedelia walked home.  "I declare," she said.  "That was plumb fun. Babies are real people. And I get along just fine with them."


It is so amazing to me, and particularly sums up so much of the first steps in taking care of a first new baby that i give it away as gifts.  A few days ago a friend with a new baby was sharing struggles she's having with trying to get her daughter to nurse and all was well until a few weeks ago and she can't figure out why and the doctors can't see anything wrong, etc etc.   Visibly frustrated she turned to others for help and advice. Some advice was offered. Mine was throwing my arms up and declaring, "babies!"    But I looked at her insanely gorgeous little babe and it made me think about all of this and of babies, even so tiny, as real people with real personalities, going through real things.  And should I have more, I would view them that way, and treat them as such, and be more patient with them and myself.  And probably still call them little zombies--tiny adorable ones that I would like to get to know.