To begin, a Julian Quote.

First, both he and I are a fan of the song Empire State of Mind, by Jay-Z featuring Alicia Keys. (are songs italicized? All titles?? I will never understand)   I mean, who isn't? Here's a link to listen to it, just because it's probably time.

Then, last week he and I visited the Museum of Natural History which was awesome, of course.  We were looking at the animals of North America, specifically some giant bears.  I told him,

"Julian, those bears are on OUR continent! North America, where we live! Not elephants, we have to go to Africa for those. But bears live here, can you believe that??"

to which he replied,

"but we don't live there with bears, we live in--breaks into song-- Newww Yoooork!"

And then, Friday we were in the midst of  a classic June Eve heat wave.  The kind you just calmly tolerate until it goes back to normal, always keeping at bay the small fear that it could possibly be permanent for the rest of the summer.  That isn't likely but the thought crosses your mind once or twice.

Anyway, so Julian and I set out for a morning adventure before it got "too hot to live" as i have said way too many times recently.  We walked to the library, waited for it to open because apparently it doesn't open until 10:00 on Fridays--what the what?  That sounds super late to me. It's like how I couldn't pick up my on-hold book about WWII the Saturday before Memorial Day because it was closed for the whole weekend. What?? You can't just CLOSE like that! I feel like the library should be open all the time, every day, for at least part of it. When it starts closing like that, i get a little anxious, like it's a sign of the apocalypse.

But anyway, we went in and basically had the place to ourselves.  We found a great book and ran around the place for a while (what one generally does at the library).  Then we went out and made our way over to the fountain but first we stopped under the Grand Army Plaza arch to see a bright red and turquoise piano standing quietly before us.  My eyes sparkled and its pull was magnetic.  Before we got to it we stood by, watching someone else play around on it. 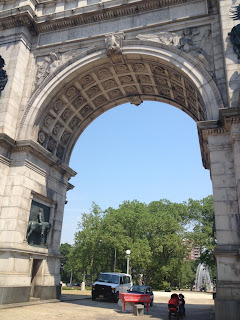 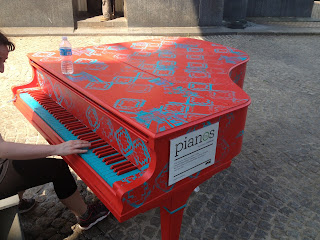 Pianos is an art installation, meant for people to play on 88 pianos all over the city.  It's fantastic. It's just the kind of thing that defines the city and the love I have for it.  After the other person left, Julian and I sat down and played some tunes.  Then I gave him my phone and told him to get some pictures, which he did.  They made me laugh because 99% of them are of my bum on the bench, and while at first i thought ha ha, oh well, I began to see that they were pretty awesome, especially the ones of my bum. So here's a little montage for you to add some magic. 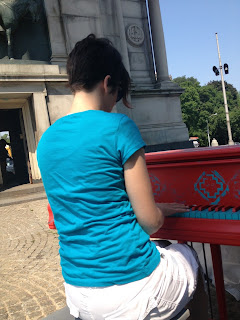 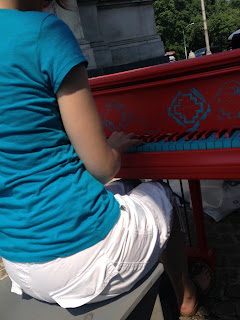 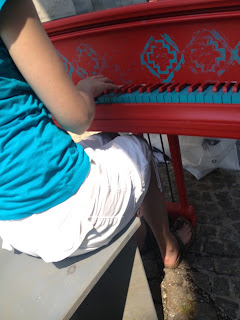 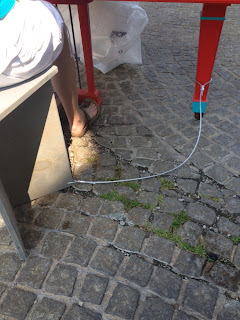 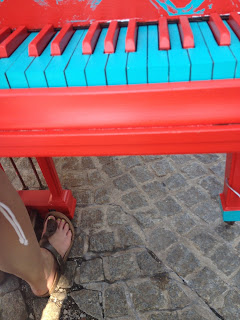 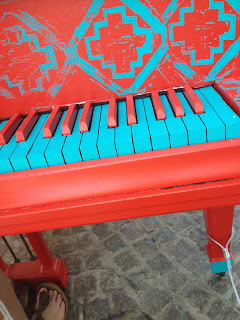 I played and the wind blew and I had my own private outdoor concert.  When I was done I began to applaud myself when I heard applause to the side from some people who had gathered which startled and basically thrilled me. I thanked them and we all celebrated this brilliant art show and the happy little moments of running into something absolutely unexpected that just charm the day.

Julian and I started to walk away when a large crowd approached.  One among the group sat down and began to play Alicia Keys' keys, the chorus to Empire, putting a cap on this New York Moment.

I did click on the link. The ad at the beginning was in Spanish and I was really hoping there was an espanol version. Would have been amazing. Oh well, can't not love this song. Speaking of voices you like, Alicia Keyes is definitely on my list.

aargh. After going through the security measures 15 times, it finally published, as my husband. Wasn't even an interesting comment. I really hate doing that. Makes me feel like I'm wearing a burka, walking behind a man who conducts all my business for me. All I wanted was to share with the world that I love Alicia Keyes.

Ha ha. But it was all worth it, for that 2nd comment. No regrets. Besides, I'm sure Rob would say the same.

That is so awesome I wish I was there to hear you play. I LOVE the pictures...you have a talented little guy on you hands. I want to see more of your hair!!! it looks so cute! I just shopped off 27" of mine and now have boy hair!!! I also want your sandals!!!!