So, though I'm not against it, I am not really what you'd call a hugger. Except I often find myself hugging people in the most awkward ways or moments.  And in fact, that's basically the only time I hug. I'm an awkward hugger. Rarely is it at an appropriate moment or in an appropriate way, so really you could say I'm strictly an awkward hugger.  I do it ALL the time. I don't know why. Maybe it's that I feel like since I'm not a hugger, I still think it's a good thing to do, so I decide early on that I'm going to do it and it's just happening and it can't be stopped. I just barrel through with the hug despite the inappropriate moment, and there's no turning back.  Like I quiz myself beforehand:  "is leaving a friend's house an ok time to hug? possibly. Sure! Let's do it"  no matter the circumstances.  Which brings us to Example A, and i think dubbed the first official Most Awkward Hug Ever.

I was visiting a friend who'd had a new baby. She was sitting on the couch nursing the babe and i was bustling around the kitchen making a mess of things and finally at the end, i was saying goodbye and she stood up and hugged me with her baby still a-latched, and we hugged (she one-armed hugged) around the nursing babe and laughed and it was awesome.

This one was my fault, and requires illustration. 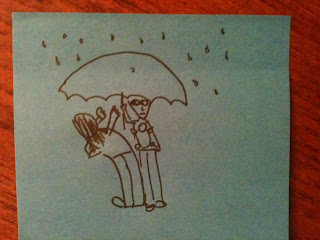 A friend had a new baby and I was out and about and ran into her in a big rainstorm.  She had her baby strapped on and was carrying an umbrella.  I hadn't seen her since the birth and was being all, "ohh hey! congratulaaaations!"   and I went in to hug her but a few things made this awkward:

a) her umbrella.  She's shorter than I so i had to duck down under it and sort of contort my body, delving way into her personal space. I mean, it's just weird. An under-the-umbrella hug? Picture it.  Like, we don't need to hug; it's raining.  I've got an umbrella.

and b) she thought i was ducking down to see the baby.  And maybe i was?? i don't even know. All i know is something told me, this is a moment to be awkward--take it!  And I did.  So I swooped down and under and as she turned to show me the face of her baby (which--trying to spy a glimpse of a baby strapped onto someone is already awkward enough) i said, "nope, i'm goin' in!" and barreled through, past the baby, and straight for the umbrella hug.  It was so weird; i don't even know how it happened, physically.   It sure was entertaining though. For me, anyway. Later on.

For this i was more of an inadvertent participant--or bystander--but it was still plenty awkward.  I accidentally got caught in someone else's hug.

I was attending a special and rather spiritual event honoring a friend of mine. We'd been chatting and I hooked my arm around her elbow in a friendly way that I like to do sometimes and we stood there like that for a minute. Then some more of her friends came around and she went in to hug someone except hold on!  Jen is still elbow hooked! And I became entangled and a part of this hug. My body, sort of hunched and twisted, was out of it but my arm was in it.  I don't even know what my arm was doing, nor if the actual hug participants noticed a 5th arm in their hug. They probably both assumed it was part of the other person.    Oh it was funny.  I've drawn another picture. 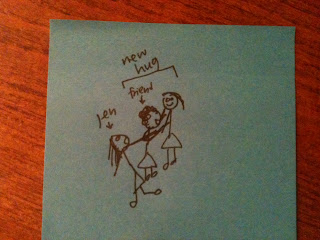 This one is a bit more fuzzy but I'm pretty sure this was what happened.  It was a going-away picnic at the park for some friends who were moving away. And there could have been another family moving away as well, because i went to hug this guy and the other friend (i can NOT think of who it was--good friends! sorry, whoever you are) was close by so i just snagged them too. It could have been their spouse, even. But still-- I made two people hug me at once. You know, like a "hit two birds" kind of thing. "Well, while I'm here..." It was like a forced group hug, but not group, just a trio, which is awkward.  And it wasn't them hugging each other, it was just me hugging two people. It's kind of like the entrapment hug except you weren't caught, from an already existing hug; you were just close enough to get caught in someone else's, someone who grabbed you into it. We made fun of it and I exclaimed "ahh...awkward hugger jen strikes again." 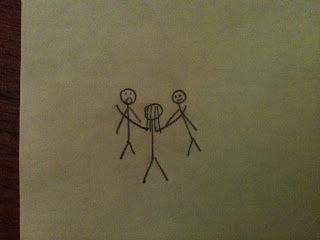 This happens so often in my life, it's really become a Thing, and it amuses me every time.  So look out, the next time I see you, you may get a hug from me.  And just remember: the more inappropriate the moment, the more likely it is to happen. You have been warned.
Posted by )en at 7:16 AM

On an unrelated note, I'd love to hear Sean's perspective on how the end of your first date went.

Back at USU my prof would take me and Mary to dinner at the end of the year as a thank you for the work i'd done. So one year Mary and I got there a little early. I had met his wife once the year before so in terms of familiarity, I could point her out in a crowd and call her by name but nothing else. They walk in and my prof gives me a handshake. After she gives Mary a hug she turns to me and goes for the full "we are good friends hug with the accompanying cheek to cheek press and quasi kiss." I had never and have never done the cheek to cheek kiss thing. I'm sure she felt like she was hugging a ridged board.

ohh booyyyy I am really laughing this is an amazing post. i remember once i went to give you a hug and you were mumbling something like "oh are we doin this ok were doing this" but it was too late for me to pull out. and that was one of many awkward albeit treasured hugs.

but seriously I really like that you make it a point to express your love to people even when it is awkward. me and cole have had several conversations about trying to be more active in the hugging community because because we want people we love to know that we love them! goodgoodgoodgoodgreat post.

I still remember the awkwardness from our last visit.
Just kidding, I dont have any recollection of that, grimaldis and jacque torres (im not going to bother looking to see if I spelled that right) is actually ll I can remember....where you even there?

but maybe if you just stopped hugging people holding babies you could really cut down on the awkward hugs.

(You should repost this with Sean illustrations to compare...thatd be entertaining).

I'm a totally awkward hugger-- it really just doesn't come naturally to me at all. But I think you have me beat with these awesome, illustrated examples. This totally had me laughing!

1. Agreed. This was hilarious.
2. I'm excited to get my very own awkward hug in just a few short days. I'll try to be blowing my nose or something when you come in for a hug.
3. Can I tell you how fun it is to know that you have something new posted every day? Love it. Thanks for this Christmas present.

The cheek press/quasi kiss is new and scary the first time. I have been there too. I also feel it is rather lovely if/when it can be executed correctly.

I should definitely get Sean to illustrate. While I think I personally excel at stick figure drawing, Sean also has artistic skills. It would fun to see his depictions.

Merry christmas to you, ash! :D. Glad you're enjoying. I am quite, as well, actually.