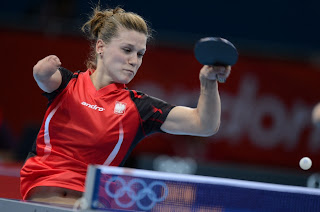 p.s. speaking of offensiveness,Sean tells me "stump" might be offensive.  I guess i should say, with an incomplete arm? I don't know.  I apologize. I'm just so impressed! It's a stump!
That's it for now. Stay tuned, these will be sporadic.
Posted by )en at 5:58 AM

I was shocked to learn today that "speed walking" is an Olympic sport. Who would have thought?

I'm obsessed with Kim Rhodes. Five gold medals?! 99 out of a 100 skeets? She's like the most lethal person on planet earth. Maybe she'll be my best friend.

And Water Polo is nutso. I'd never really watched it before. I described it to someone like this: "It's like a hockey match was going on and suddenly the ice melted and the hockey players stripped down to their overtight undies and kept fighting."

I love the freaking Olympics.