(Not to be confused with the "Christmas Recap" post)

Well, the shopping is done. The tree is almost dead.  The days until Christmas are few.  Am I ready for Christmas? Yes.  Here are some pictures of what we've been doing.

First, Sean made a turkey pot pie with Thanksgiving leftovers. 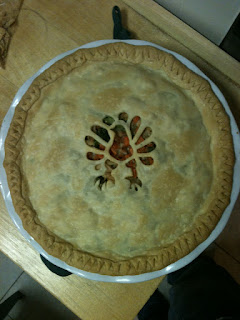 Then, I made a few [million] dozen treats throughout the month. I needed a few cookies for something and threw them onto a pan. Then i stepped back and realized what a freakshow I am. 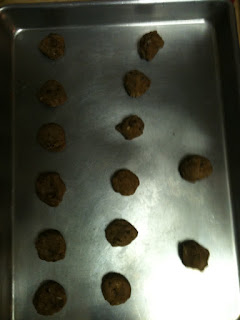 Seriously, i think there's some mental illness going on there. I showed it to Sean hoping he'd laugh but i think he was mostly worried. But tried to laugh it off. But failed.

p.s. those were creme de menthe cookies made out of a package of Andes Mints bits. I used the recipe on the back and they were pretty tasty. This month alone, I have consumed approximately 1000% of the average mint-intake (should just be "mintake") over the lifespan of an average human.


We also experienced a few ominous moments, such as this: 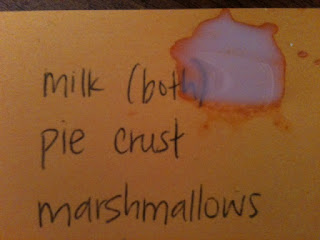 I spilled milk on the "milk" line on my grocery list??  What does it MEAN???  Also, great list, Jen.  (pretty sure it was only those 3 items)
Went on several walks in very temperate December weather.  Gawked (does anyone else think there should be an L in there?) at Julian's cuteness/hipsterness. 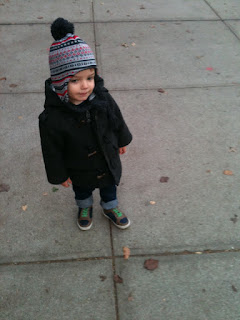 Paused to stop and smell the December flowers. 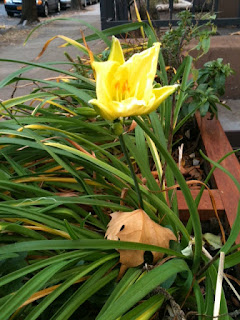 Paused at the stuffed animal graveyard in the yard of a brownstone nearby and asked my sister if I should get her daughter this doll baby for Christmas. 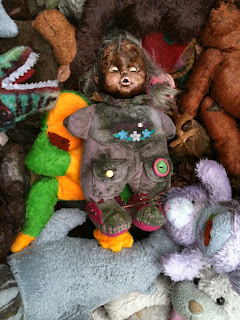 Made gift tags with friends.  Can you see which parts were Sean and which were me? 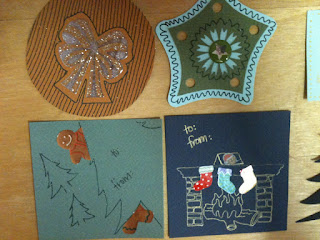 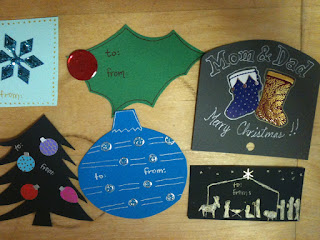 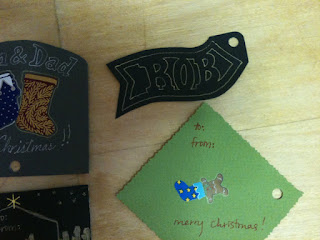 Went to see Santa again.  I love this Santa. And so does Julian, you can see it in his face. Check out that adoration: 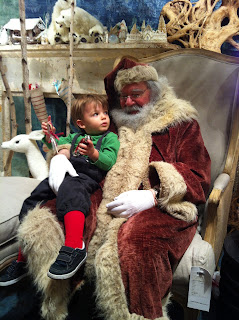 (Yes, we put him in the same pants as last year.  And perhaps the same socks?)

Drove to the Dyker Heights Lights.   Do I even have words to describe this?  I don't know. We'll find out.  There is this neighborhood called Dyker Heights in bklyn, and within it are a few blocks with these mini-mansions that are just--WOW.  Think Big Fat Greek Wedding. Over-the-top columns, (instead of subtle, tasteful columns) gargoyles, statues. Maybe a fountain.  Huge sweeping staircases up to the lavish front door. It's just the gaudiest thing you've ever seen.  Now, pack on 50,000,000 lights and decorations, like blowup statues and giant nutcracker soldiers (i'm talking, 25 feet high, people. And motorized) and carousels and entire choirs (motorized, and scary), every Santa variant you can imagine, every nativity, PER house (all get it done professionally. They put signs on the yards) and you have yourself a SHOW.  I wish I could capture everything. Oh how I wish.  But, like sunsets and unicorns, I think it's just something you have to see in person to really believe, and get the full effect.  It's probably better that way.  This is the 2nd year we've gone and it did not disappoint.

I only snapped a couple pictures of my favorite house.  I spotted it last year and frantically clawed at my car window, begging to go take a bite.  I peeled my eyes for it this year and found it.  I got out to get a picture. 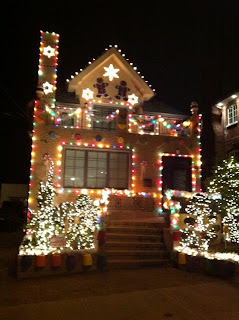 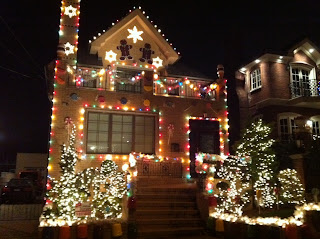 A gingerbread house!! There's candy on the house! Frosted lights! Gingerbread men! Sparkly gumdrops that lined the front entrance!!  *pant, pant pant*   It's too much. It's just too much.

Click here for a huge Santa and even bigger toy soldiers.  I wish there was a human there for scale. That Santa is probably 15 feet high.    In fact, click here to see the google page of "Dyker Heights lights" images.  We drove home with bugged-out eyes, feeling like we'd overdosed on something.

Lastly, it's been fun and interesting for me to have a little 2-year-old Julian around for Christmastime this year.  I suddenly felt this weird need to decorate everything and do Christmas crafts. I had a bit of an identity crisis because crafts have never been a part of my genetic make-up.  Not to say i couldn't adopt the practice (check out those gift tags, for example).  But it just came out of nowhere and totally caught me offguard.  We've done a few things, like make a huuuuge fatty paper chain out of giant strips of Christmas wrapping paper, we made a Christmas tree pen thanks to supplies sent by my sister, and Julian made a nativity scene placing stickers all by his very own self.    Here it is: 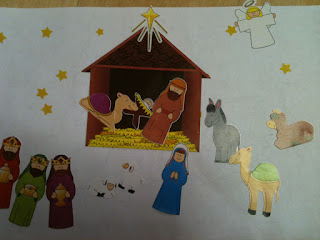 Apparently the camel has something against the baby Jesus.  Fortunately Joseph is there to soften the fall. Mary has fled the scene.

Meeeeerry Christmas, from ours to yours.
Posted by )en at 6:20 AM

I really heart the turkey pot pie. Like, really! LOL!