Just spent the evening watching 102 Minutes, the documentary taken from archives of random people' 9/11 footage.   It's been a strange weekend over in these here parts.  A few days ago I was going to take Julian on the Brooklyn Bridge to look at boats but decided it would be something Sean might want to do so we waited until the weekend.  So yesterday we 3 took a trip to the bridge, tried to walk across it and realized it was lamesville because they're doing construction on it and have boarded up the sides so you see nothing.  So we decided to go down to the Brooklyn Bridge park and look at boats there and run around. It was a beautiful cloudy morning.  We walked along the pier and played at the playground.  Sean took Julian in to play and I sat on a bench on the pier and didn't realize for a few minutes what i was looking directly into. 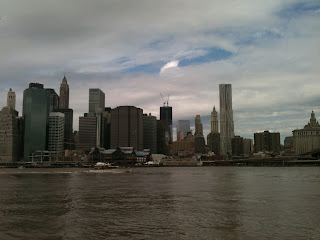 It is lower Manhattan and that little white puff of cloud is right above 1 World Trade Center, mid-construction.  I suddenly remembered what weekend it was.  It was a somber moment and though the park we were at is new, i imagined sitting here 10 years ago. I imagined what it was like for people to watch across the river.

It's an eerie calm this weekend.  Yesterday we saw dozens of planes and helicopters patrolling the skies.  This morning there were police officers at the subway entrances. Sean told me precautions they were making on Friday, threats about more attacks.   I've been listening to NPR where they had people directly effected by the attacks give their own interviews with other family members.  It's sad and quiet.  An eerie calm.


Sean and I moved here in the fall of 2003, so we weren't here for the attacks. I have friends who were and they speak of it as a huge Trauma of their life, as i can only imagine.  Obviously all of us felt it but to be here must have been completely incomprehensible.   A few months after we arrived, I did some transcription work for a woman who was working on her dissertation on the September 11 attacks.  She gave me hours and hours of interviews she conducted with firefighters and police officers who were there that day.  I cried while I typed, hearing their stories. It put me closer to it than I had ever been.  Sometimes when we're walking near the site, I see street names the interviewees mentioned and they stick out in my mind. I recall the events they described and imagine how it must have been.

One of the first phenomena i marveled at when i first moved here was this apparent "New York Pride" people seemed to have.  At first i was amused and somewhat scoffed and now, fast forward 8 years, I am completely one of them.  I absolutely have the New York Pride, and i have it with pride.   You feel like an adopted kid, being a new transplant here.  And after a few years if you're one to love it, you share that love with the whole city.  It's the same kind of love, and if you have it, it's like you made it through initiation. You are one of them. [us]  It can be quite palpable. I've mentioned the "we're all in this together" feeling you often share with strangers here. It's what makes people non-strangers for a moment.  Remember that feeling the whole country had on that day? And you wanted to do something? Run to a Red Cross and give blood?  That kind of feeling runs through this city all the time, about everything that relates to living here.  And it is definitely heightened this day.  Though i wasn't here on the day, being a New Yorker, I have taken a bit of it on, and I feel for those around me, who watched it in person, who lost loved ones, who helped others.  So it's a strangely quiet time in this normally loud crazy city, and I think it's because we're all quietly preoccupied, sharing a bit of the grief together.
Posted by )en at 9:11 PM

just wanted to point out: i typed this pretty quickly, wanting to get it out before i hit the hay. Made a few edits here and there with Sean next to me, called it good, and hit publish. At exactly 11:11. Totally not on purpose. weeeeeird.

Good post, Jen. I know when the attacks were happening I thought about the people involved, the ones in the buildings, rescuers, all their families. But this week I keep thinking of everyone else in the city and nearby. It would have been horrifying, traumatic, as your friends have said. Anyway, I guess all I wanted to say was, word.

Beautifully said Jen. I love being an adopted kid of this city and have also felt heavy this weekend for the "older siblings" who were here 10 years ago.

I would like it if we could find a way to all be nice to each other for a few weeks without having to suffer a national tragedy first.