Sean and I had an amazingly productive Saturday.  Julian was kind of lazy though.  We made a list of all our things. Want to read it? I thought so:

Wait, side story. This was funny. On our drive up to Cold Spring we took the scenic Palisades Parkway. The leaves stretch out over the road and it's very beautiful.  You always anticipate the fall leaves as being wondrous and beautiful so when we first saw the leaves I may not have realized at first just how ridiculously and also falsely bright they were, for I was wearing my brown sunglasses, the brown sunglasses that give everything a warm hue, that heighten and brighten every color.  So when we first saw the leaves, my reaction:  "Wow... wow! What the CRAP?!?  These colors are insane!! What--everything's FLUORESCENT!"  "That tree is on FIRE!"   I carried on like this for a while before we realized my glasses were creating these unearthly colors, and i couldn't ever take them off because the leaves were kind of disappointing without them.
More bullets for Saturday.
Here's the sideways pic of the chest sideways in the hall. Wish i could get better pics, and i could if i were more patient, but i'm not.  Happy day to you. 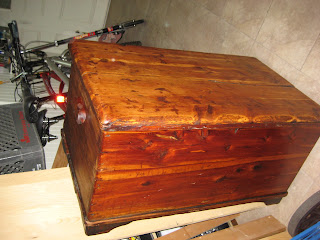 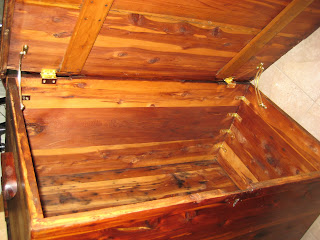 Ok, here's the chest in action. 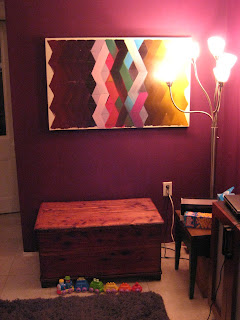 That was a very busy day, and a dang awesome toy chest! Julian is a lucky guy. :0) The crepe sounds delicious, and what a great side story. Have you ever had one of those times when you're in the car and you see the most incredible sunsets, so you roll down the window for a better look only to realize it's not quite so cool w/ out the tinted window? I usually rol the window back up again and pretend I didn't notice. :0)

brown sun glasses are the best. They even make AZ in August look good. Well...better.

You should try them on diaper disasters. It really deepens the colors.

Love the toy chest. Things like that just make me happy. Don't love waking up to blow-out diapers so much. I remember seeing one of those at church once before I had kids and wondering how that poor kid's parents had let him get into a state like that. Now I know! (And now I don't judge quite so hastily, either!)

I may or may not know parents who do the following:

-With their cell phone, call the home phone.
-Pick up the home phone, and leave it in the sleeping baby's room.
-Keep the cell phone open and on speaker, and then go down the street a couple houses to hang out.

It's like a baby monitor, but with ye olde cell phone.

How did you know we do that?! Except we do it cell phone to cell phone to save minutes. I rationalize it is the same as being in some big houses with the baby asleep at the other end...right?

Ha! Why, that's brilliant! I am TOTALLY doing that. Do you realize we have restaurants YARDS away?? Do you realize how much i miss eating out with Sean?? Why did no one tell me this trick before, or that it was semi-socially acceptable?

Yes, Rob. It's totally the same.

You know, on a slightly different note.. I don't need a big house. I don't even want a big house. But i would love a looong house with a room at the end to stick the kid. Dream of dreams.