This past Saturday Sean & Julian and I participated in a fake walkathon.  On behalf of a real walkathon taking place that very moment, 2 time zones away in Utah.  It was for the American Diabetes Association and in honor of my niece, Grace, a lovely little new diabetic who is 7.  I'm not sure if you can still donate or what but here's a link for the curious.
Since we don't live in SLC, we walked in NYC. For the actual walk, there was apparently a 3 mile route and a 1 mile route. You could choose which you wanted to walk.  I originally planned for a 3-mile walk.  Then I busted my back a couple weeks ago and aged 50 years in mere seconds.  It's such a bummer when that happens.  Anyway, so I planned a route that was about 1.5 miles.  Here it is. Behold the map!!  (keep it open, if you can. You will refer to it often. Click to enlarge) 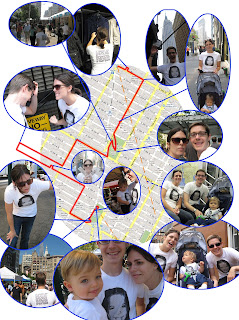 Um, of course we made t-shirts!  Everyone smiled to see Grace's smiling face.   Ok, so the route we walked is in red.  I should have put in a line showing the originally planned walk but we mostly stayed true to it.   There are lines connecting photos to the exact location at which we took them.  Put less awkwardly, the photos are showing what we were doing on the map.
Here was the general plan:  To start at the Empire State Building on 34th street, and make our way down, ending at 14th street, Union Square.  This is probably called the Flat Iron District, and it's one of my very favorites in the downtown.  When we first thought about what places we wanted to hit, i started naming all of my favorite shops:  "Ooh, let's go to Eileen's Cheesecake!"  "And then Max Brenner's!"  "Doughnut Plant!"   "Then maybe we'll end at Dylan's Candy Bar!"   But a) those places aren't terribly close to each other and b) we thought it a bit inappropriate given this is a Diabetes walk.    Maybe next time for the Walk for Hypoglycemia... or... Walk for Anorexia.    Ha ha. Those are probably totally offensive, and i'm sorry, but i'm mostly laughing at my super lame attempt to come up with something good. Fail.
Anyway, let's get a-walkin'! Join us, won't you.
First, The two photos in the lower right hand corner, the ones that don't connect anywhere, were taken at home and on the subway on the way.  Did we feel silly wearing matching tees? Heavens no.  Did someone offer to take our picture because we awkwardly tried to take it ourselves? Yes, he did. And he said we looked adorable. And he wasn't 98.    He asked what it was all about and i explained. See? Spreading the word already.  Too bad our t-shirts had nothing informative or helpful but were mostly just for fun.  Probably should have given that some more thought.  Oh well.
We got off at 34th street and got our walkathon off to a good start by walking 30 paces and entering H&M to browse clothes in the name of Diabetes. Of course.  Next!
Then we got our pic of the Empire State Building.   Fun Fact! I used to work there. For like a month. The job sucked. But i worked there! Had a special pass and everything. Holla. Next!
We turned down 5th avenue and Sean made us stop to take a pic of the Flat Iron Building ridiculously far away.  Look at this awesome picture taken in olden times.
Next on our route was hittin' up the Shake Shack, home of a fantastically long line to a little shack in lovely Madison Square Park (not to be confused with the garden) that has pretty awesome burgers and shakes. Due to broken spines, i had a mega-headache at this point and was instantly cured by taking 2 bites of the Concrete Jungle (made with custard ice cream and every flavor of everything).   This picture of me and Sean is a really, really good one.  I'm really happy with it. Next!
We doubled back in the park a bit to walk through a market.  I saw a necklace that was pretty awesome. Other than that, not much to tell.  But there is a picture. Next!
Ok, so next on our route was one of my favorite stores, Paper Presentation.   So, go ahead and look at the map.  You might see that we walked outside the boundaries of our route into a white oblivion before we realized we'd gone too far, and, given how long the avenues are, this really makes me want to cuss.  @#%!  See, the official address of the paper place is on 18th street, but I KNOW there's a door that opens to 19th street too. And I could have sworn it was between 6th and 7th aves.  So on 6th ave, I turned us onto 19th street.  And we walked, and kept on walking.. and walking... almost to 8th avenue. Sigh. What a pain.  This picture is us venting our frustration.  I tried to convey a feeling of "Son of a ------!"
Alright, next picture. What do i love about this place? Many things, but mostly it's for the STICKERS.   I have some obsessions in my life, and one of them is stickers.  You may not have known this about me.  Now you do.  I have a chest of stickers, organized by category.  Mostly i just stare at them lustfully, but otherwise i'll put them in letters or whatnot.
I always forget that 5th avenue doesn't take you right to Union Square.  How many times have i made this danged mistake in my life?!? A lot.  I used to spend some time on 23rd street and would often walk to 14th, and i seriously had to physically force myself to keep walking to Broadway instead of turning onto 5th ave, and walk down that way, otherwise i'd completely miss the Square. As you can see, it is highly worth it to skip along the 5 extra steps to Broadway way up on 23rd, where they intersect.   Gaah.  Fortunately we realized what was happening right at 14th street, cut over and made it to the park!
Here are some pictures of our final destination including Sean and Julian buying some syrup, Jen passing out from spinal combustion and general exhaustion, Sean walking through the market where you can read what the backs of our shirts say, and our family pic of sickly Jen, half-a-face Sean, and angelic Julian. We look like trolls next to him.
What a great day!!  Doing a walkathon in the city is awesome. I've always wanted to do one.  Maybe i'll do a real one some day but this one was just as good, I am certain.  High five to Grace and her family!  Wish we could have been there in person.   Hope you feel the love.
Posted by )en at 6:34 AM

Jen, thanks for doing that. I don't know if Grace really understands what it was all about but I really appreciate the effort you put into this. Thank you so much.

I want you to know that I laughed at the anorexia comment. However, that is coming from a guy who owns this shirt:

I loved this. What a great idea...and I love the shirts too.

That's great that you got to do that for your niece, and I'm so jealous you got to go to the Shake Shack!!! I love that place... I love the Empire State Building, too. I always wanted to up it so much, and so finally the day before Cameron and I moved from Brooklyn, we managed to find time to go up to the top. It was definitely worth it. :0)

I hope your back is feeling better and that you "un-age" at least 49 years.

This picture of you growling at Sean is my favorite, maybe ever.

Also, YOU ARE SO RIGHT ABOUT THAT ENTERANCE AT 19TH STREET!!! I almost punched my computer when I read about that. I have had that exact same frustration!!! Maybe we should start a support group or something. Could you make us t-shirts?

Why can I not ever remember the friggin avenues it's between?!? It's like the room of requirement or something.

oh jen...you made my sucky jack-wouldn't-stop-crying-night all better. :) i love reading your blogs. thanks for telling us all about your walk-a-thon!

Can I have some details on your hurt back? Feeling better?

Did Julian step on a crack or something? One of my kids almost did that the other day and I freaked out.