The other day, Sean and I were discussing African trees (the night before, the topic of choice was Eunuchs-- but that's a post for another day) and were thinking of that classic Savannah-y tree, that has a big fan of branches and a flat top. This: 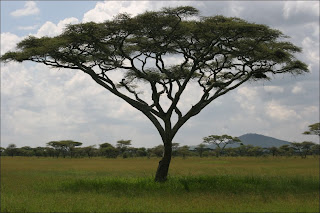 We tossed out a few more back and forth and then finally I had to consult google to tell me the answer.

But yes, yes he does get credit, though I would never say that to his face. I just thought this exchange & my word ideas were funny. Good ol' brains. So entertaining, they are.

Ok, so the story is not over. (this totally hilarious story worth telling) I thought it was. So I realized, " wait.. i can just put in a picture. They can see what it looks like." Because i struggled up there to describe the tree. So I went up to the google box to type in baobab:

Jen: "whoops...not---" *delete delete delete*
Sean: "Bilbao???"
Jen: "hahaha! shhh-shutup." And then i typed in the correct word & clicked on google images and up came all these other trees. 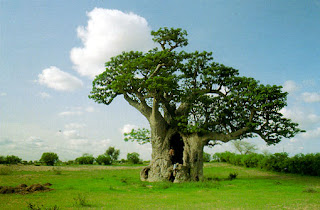 And we realized we had the wrong tree all along. It is an acacia tree. Acacia.

And thus concludes this story about I don't know what. You know how you come sit down to blogger with a story to tell, a post to make, and then you realize it's not even blog-worthy at all, and you desperately try to make it into something it would never, could never be? I don't. All of the things I do (in life) are blog-worthy.

The story of the bilboa tree is that they were the most beautiful trees ever, but they were so lazy they wouldn't produce any fruit, so finally the gods got angry with them and ripped them out of the ground and planted them upside. They hardly EVER have leaves on them, and usually look like a mess of roots sticking up in the air. And yet, they're still kind of pretty, in a goofy sort of way.

I didn't know that the other trees were acacia trees, although I do have to brag that I have some gorgeous pictures of them with the sun shining on them and giraffes in the foreground. Yay for study abroad in Tanzania!

There was an amazing baobab tree in Barbados that we got to see, it was huge. Those trees always make me think of "Le Petit Prince," which is kind of funny. I've never actually seen an acacia tree, though, they look pretty awesome.

At no point, in your rambling incoherent response were you even close to anything that could be considered a rational thought. ... I award you no points and may God have mercy on your soul.

I'm cracking up thinking about a Bilbo tree.

It's what happens when a Hobbit and an Ent reproduce.

Personally, I'm a fan of the sausage tree.

yeah, i have nothing to say for myself. this is what it is.